I’m An Arab Citizen Of Israel. I’m Boycotting The Election. 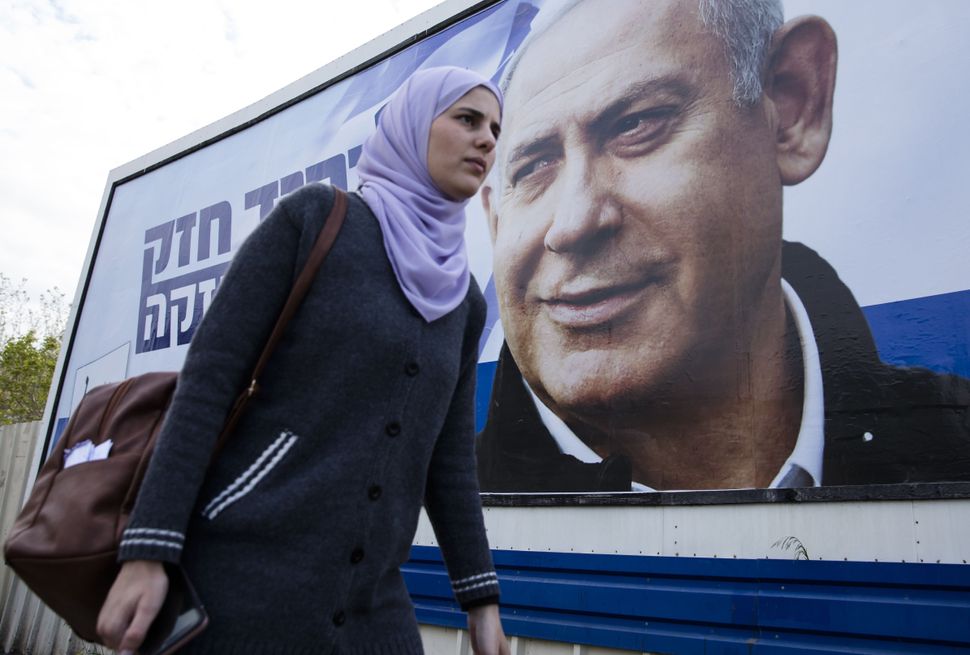 As Israeli voters spent last month preparing to head to the polls on April 9, Benjamin Netanyahu took to social media to remind them that “Israel is not a state for all its citizens: According to a basic law we passed, Israel is the nation-state of the Jewish people, and the Jewish people only.” He reiterated the message when he told a cabinet meeting that “the state of Israel is not a nation-state of all its citizens; other minorities have a national representation in other countries.”

Netanyahu was referring to the infamous Jewish Nation-State Bill, which declares Israel the “national nation-state of the Jewish people only,” and officially downgrades its Arab Palestinian minority, who make up more than 20% of its population, into second-class citizens.

The bill, which was passed by the Knesset and voted into Basic Law last year, makes explicit what many Israeli officials have tried to mask for decades: Israel is a democracy only for its Jewish citizens.

Meanwhile, Netanyahu and his political allies scrambled to social media to warn Jewish voters that if Netanyahu loses the election, his main challengers, Benny Gantz and Yair Lapid, will have to rely on Arabs to form a government. As Netanyahu elaborated on Instagram, “We just want to sharpen the central question of these elections: Should Israel be led by a strong right-wing government headed by myself or by a left-wing government of Yair Lapid and Gantz with the support of the Arab parties? There is no other way for Lapid and Gantz to establish a government and such a government will undermine the security of the state and the citizens.”

This isn’t the first time Netanyahu has issued fear-mongering remarks against Arab voting. On the last Election Day, in 2014, he fired off a barrage of Facebook posts warning his Jewish supporters that “the rule of the right is in danger,” because the “Arab voters are coming out in droves to the polls,” and “left-wing organizations are busing Arabs out toward the polls.”

This is clearly an instance of voter suppression by means of fear-mongering and propaganda, aiming at demoralizing and enfranchising Arab voters. It’s a naked attempt to establish what Alexis de Tocqueville called “the tyranny of the majority.”

And it seems to be working: As a recent survey ordered by the Arab-majority Hadash-Ta’al alliance found that half of Arab citizens in Israel say they will boycott the coming elections. Their reasons ranged from racism and discrimination to lack of faith in both Arab parties and Israel’s democracy.

This should come as no surprise. After all, one can hardly blame a minority for boycotting an election when it is told beforehand, by all major party leaders, that its representatives will not be invited to join a government coalition and therefore are permanently and hopelessly excluded from the process of decision making. (That last time an Arab party sat in an Israeli government was in 1949.)

For Netanyahu, the tyranny of the majority also means dehumanizing the minority. Shortly after the early elections were announced, he took to Twitter to warn that Arab parties “who support terrorism will not be in the Israeli Knesset!”

Terrorism, however, did not prevent Netanyahu from allying himself with Otzma Yehudit (Jewish Power), the Israeli equivalent of KKK, which consists of acolytes of the late militant extremist Meir Kahane, who advocated the transfer of Palestinians to neighboring Arab countries and the segregation Israeli Arabs from Israeli Jews, and whose Kahane Movement, known as Kach, is designated by the US government as a terrorist organization. In an election boost for Netanyahu, Israel’s election committee voted to allow Otzma Yehudit candidates to run while banning the Arab parties that Netanyahu accused of supporting terrorism. (The committee’s decision was reversed by Israel’s Supreme Court since.)

Netanyahu’s fear-mongering suggests that he detests the idea of universal suffrage in Israel. Yet how can this be surprising? For almost half a century, his government has supported the settlement of Jewish citizens on land populated by Palestinians who, unlike the settlers, enjoy hardly any rights, not to mention the right to vote for a sovereign parliament.

Palestinians in Israel have hardly fared any better. For decades, senior Israeli politicians have portrayed them as the enemies from within, a demographic time bomb, and a fifth column population.

Arabophobes like Avigdor Lieberman have launched election campaigns promising to disown Palestinian citizens and unilaterally transfer them to the West Bank in exchange for Jewish settlements. Lieberman also proposed loyalty tests for the Arab minority, threatening to deny citizenship to those who failed.

Netanyahu himself has on several occasions threatened Arab citizens with disenfranchisement. In November 2014, after Israeli police shot dead a young Arab citizen in an Arab town in the lower Galilee, he ordered his interior minister to look into whether Israel could strip citizenship from those Arabs who dared to speak out in support of a Palestinian state. Echoing his former defense minister, Netanyahu even challenged Arab protestors to go and live under Palestinian rule in the West Bank and Gaza, citing their “lack of loyalty to the State of Israel.”

To be sure, Arab disenfranchisement is not the single product of Netanyahu’s and Lieberman’s racist minds; it is deeply entrenched in Israel’s political and legal system. According to Adalah, the Legal Center for Arab Minority Rights in Israel, there are more than 50 basic laws that evidently discriminate against Arab citizens, including the nation-state law, which explicitly establishes that Palestinians in Israel have no political rights.

This brings us to the key issue, namely, Israel’s self-definition as a “Jewish democratic state.” Israel’s basic laws and policies are predicated on Jewish exclusiveness and privilege. In other words, Israel is a democracy, but it is a democracy for — if not exclusively of — its majority Jewish population.

It should come as no surprise, then, that many in the Arab community view their Israeli “citizenship” as a mere political fiction. And when the State of Israel officially degrades its Arab citizens into second-class citizens, one is left to wonder exactly what moral mandate it has to demand their unconditional loyalty.

As an Arab Palestinian citizen of Israel, I have no reason to be optimistic about my future in the country. If by simply exercising my basic democratic right to vote, I am posing a threat to Israel’s political order, then I can only imagine where my struggle for equal rights stands right now, to say nothing about my fellow Palestinians across the border.

In a few days, I will be joining fellow Palestinian citizens who are boycotting the Israeli elections, who refuse to partake in the tyranny of the majority and their own marginalization, and who decline to serve as a fig leaf for a democracy that exists for “the Jewish people only.”

Seraj Assi is the author of “The History and Politics of the Bedouin.” He is a visiting fellow at Georgetown University.

I’m An Arab Citizen Of Israel. I’m Boycotting The Election.