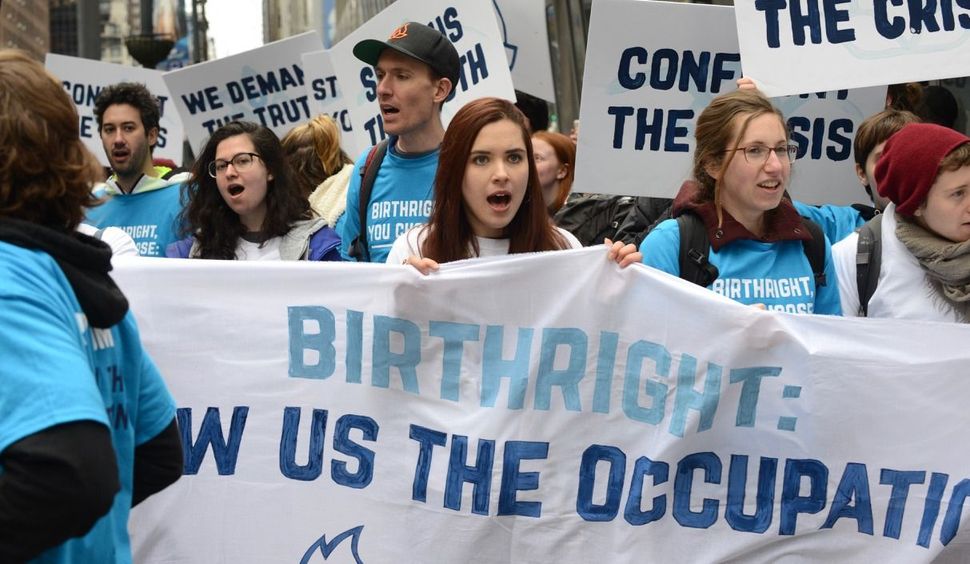 As the chasm between American Jews and Israel widens and more and more young Jews renounce Zionism, many assume that Jewish anti-Zionism is based on scorn for Israel’s myriad human rights abuses.

They aren’t exactly wrong. Many Jews, both young and old, have rejected Zionism due to their solidarity with Palestinians. But pro-Israel advocates miss an additional key reason for the shift to anti-Zionism among young Jews: self-interest.

Imagine attending the celebration of a recent convert. The officiating rabbi calls her up to the Torah the first Shabbat after her immersion in the mikvah, and congratulates her on this momentous occasion. The rabbi then goes on to talk about how moving it is for converts to join the Jewish people at a time of rising anti-Semitism around the globe. Thank God, she continues, that we have the State of Israel as a haven from anti-Semitism.

But this scenario, which has no doubt happened in Conservative and Reform synagogues across America over the past few years, is actually a chilling one. For even though the rabbi and the congregation are happy to embrace their new convert as a Jew, the State of Israel will not. Israel only accepts conversions from a limited number of rabbis, all of whom are Orthodox men. The Rabbinate, which defines who is a Jew, similarly does not consider patrilineal Jews to be Jews.

What that amounts to, at a time of rising anti-Semitism in America and across the globe, is nothing short of horrifying. For if anti-Semitism were to become imminently threatening such that emigration to Israel was absolutely necessary, many of the Jews targeted by anti-Semitism would not be Jewish enough for the Jewish State. This would result in a scenario in which matrilineal Jews by birth and Jews of choice with the correct rabbi’s name on their conversion documents would flee to the State of Israel, abandoning those Jews who aren’t “Jewish enough” to fight anti-Semitism alone.

And yet, horrifying as this scenario is, it is also the truth buried in the statements rabbis across America make when they embrace political Zionism: Though we may claim autonomy over who is a Jew in our own synagogues, we defer the actual definition of who is a Jew to a foreign government.

When these issues have been raised in the past, Jewish institutions have called for a change in Israel. To their credit, liberal streams of Judaism in the US have made repeated demands that Israel become more accepting of their forms of Judaism and embrace true religious pluralism.

But the problem of Israel’s definition of who is a Jew is not about where it draws the lines, but that it draws them. For as soon as a Jewish nation state was formed, it had to define its citizens. This is the business of a state. And even if Israel shifts its boundaries to include a few more liberal Orthodox converts, or even non-Orthodox converts, there are always going to be Jews left on the outside, looking in.

It’s true that Israel accepts patrilineal Jews and non-Orthodox converts as citizens, despite rejecting their status as Jews. But what is this really worth? It means that these “non-kosher” Jews won’t be allowed to get married to other Jews in Israel. They are essentially second class citizens. How exactly is that meant to comfort potential Jewish escapees of anti-Semitism? You have an escape hatch, but the escape hatch will both deny your identity, and forbid you from establishing a family.

It’s an unacceptable and humiliating possibility. Israel has a long track record of treating non-Jews — be they Palestinians, Filipino migrant workers, or Eritrean refugees — with hostility at best. And now it’s started in on Jews who aren’t Jewish enough. Recently, Jews who are unable to prove their Jewishness have been required to submit to DNA tests in order to establish families.

A convert’s safety and existence should not rely on accepting second-class citizenship — in a country known for its particularly demeaning treatment of second class citizens. Accepting Israel’s definitions of who is a Jew is not solidarity, and it is not love of the convert. In fact, it suggests that you never actually accepted their conversion in the first place. It suggests you think that, when it comes down to it, many Jews you claim to welcome into your congregations aren’t really Jewish enough for you.

So long as a Jewish state exists, it will claim the right to define who is and who is not a Jew. So long as a Jewish state exists, there are Jews who will be marginalized and excluded from that state. Rabbis and congregations who embrace Zionism are denying their own autonomy as those who confer the rights and privileges of Jews, and rejecting the Jewishness of many of their own congregants.

So now the challenge is to our rabbis and our congregations. Who are you going to choose?

With every Prayer for the State of Israel, every “We Stand With Israel” banner, and every Israeli flag, synagogues and congregations are choosing Israel and Zionism over their congregants, and particularly over their converts.