In Israel, Even Death Is Controlled By The Rabbinate 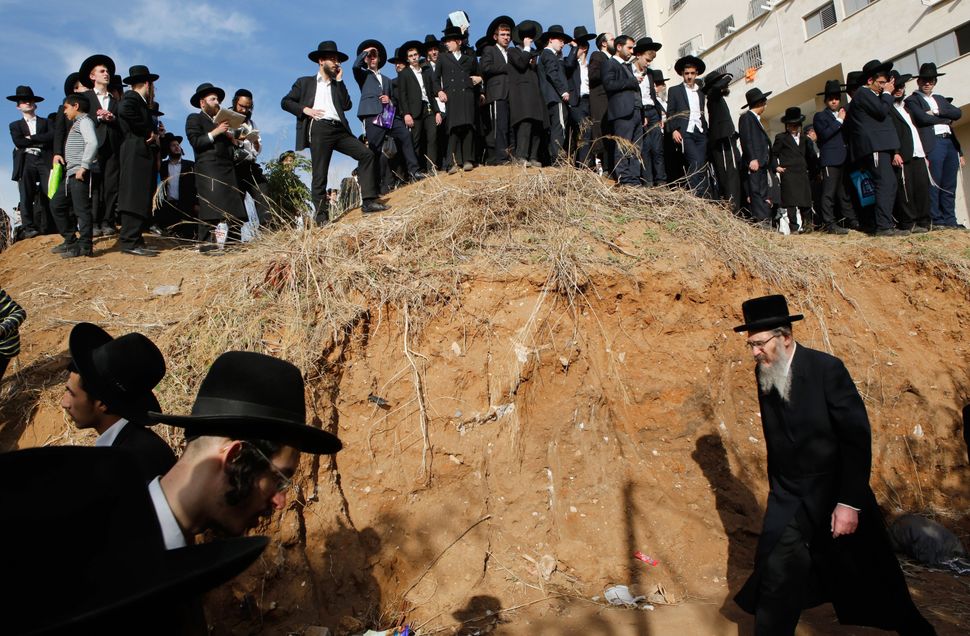 Jews gather to watch the funeral of leading spiritual authority for ultra-Orthodox Jews in Israel and around the world, Rabbi Aaron Yehuda Leib Shteinman, in the central Israeli city of Bnei Brak on December 12, 2017. Image by Getty Images

JERUSALEM – Several years ago, Yael Wittenberg, a religious mother of two from Israel, had a miscarriage. The hospital took the infant and, as per the widespread tradition here, transferred the body to a local burial society, known in Hebrew as a Chevra Kadisha, to bury in secret. Despite Wittenberg’s entreaties, neither would divulge her child’s final resting place.

After her next pregnancy also ended in a miscarriage, Wittenberg again was turned away. No information was forthcoming.

In Israel, religion and state are inextricably linked, with the government-controlled rabbinate holding a monopoly over issues of Jewish status such as marriage and divorce. This often leads to conflict between the Orthodox and their more secular minded counterparts, and even death doesn’t end the battle over religion.

According to Itim, an advocacy group that helps people here deal with the religious bureaucracy, some 38,000 Jewish Israelis are buried here in 1200 cemeteries, most of them run by the burial societies, large non-profit organizations that oversee every aspect of burial, from the traditional washing of the body to the the funeral ceremony. These societies fall under the authority of the Religious Affairs Ministry. By law, every Israeli is entitled to a free burial, but in practice, the process has often been a source of conflict at a time when those using its services are least able to cope with stress.

“We have a call center where people call if there are problems with the religious establishment,” said Itim founder Rabbi Seth Farber. “We get like 800 calls a year related to burial.”

Farber is highly critical of the laws governing burial in Israel, calling them outdated. Noting that, unlike marriage and divorce, the institution of “civil burial” ostensibly exists in Israel, he bemoaned the fact that there are only six such organizations out of around 300 active burial societies in Israel and that none of them are based in either Jerusalem or Tel Aviv, the country’s two biggest cities. Haaretz reported in 2017 that some 20 cemeteries around the country are have received authorization for civil burials but that a shortage of plots has made it impractical for many.

The majority of Israel’s burial societies are staffed by Haredi [ultra-Orthodox] Jews, a significant number of whom adhere to a stricter form of Jewish observance than the average Israeli. Until 2012, many of these societies prohibited women from taking part in funerals, preventing them from eulogizing their loved ones and, in some cases, even enforced strict gender segregation at funerals. This practice, which sparked widespread outrage and violated a previous high court ruling, only ended after a ministerial committee called upon the Religious Services Ministry to provide a new directive to the burial societies prohibiting them from discriminating based on gender.

In a report cited by The Forward in 2011, one women described how she had arrived at a funeral and was shocked when, expecting to be able to stand with her husband, she was directed to a separate women’s section.

“I didn’t want to make a scene — that’s all they needed at the funeral,” she said. “But as a religious woman, I felt outraged. Why are they suddenly separating men and women? Why do I, at this moment, have to start worrying if I’m standing in the right place or not? Rather than dealing with mourning for my aunt, I’m wondering if I’m turning someone on. It’s completely twisted.”

While the issue of the exclusion of women has been steadily improving, many women like Wittenberg who have undergone stillbirths still face issues. According to Jewish law, parents of stillborns and children under 30 days who pass away are not obliged to engage in traditional mourning practices and many burial societies “had a traditional policy to not allow parents to participate in burial.” While based on tradition rather than Jewish law, the societies took a hard line on this issue, despite growing pressure for change. And while Israel’s Ministry of Health and Ministry of Religious Services declared in 2014 that burial societies are obligated to accommodate parents of stillborns, Itim has found that “a large number of burial societies remained unwilling to bury stillborns, some were unwilling to allow parents to attend or to participate in burials, and many remained lax in their recording of information, making it difficult for parents to locate graves.”

In one high-profile case in 2015, a burial society in Jerusalem refused to allow the parents of a four day old child to participate in his funeral, returning the body in a cardboard box after backing out of an agreement to bury the body.

For her part, Yael Wittenberg only learned in which cemetery her two stillborns were buried after an intensive effort spearheaded by Itim, she told The Forward. The burial societies were “very religious” and “didn’t want to tell me” where the burials would be. Turned away, her response was brutal.

“It’s my child, I carried him. I deserve to know where my child is buried,” she said.

According to Farber, others, including members of Israel’s large Russian-speaking community, have also experienced difficulties in dealing with the burial societies because “in many cases, they refuse to bury Israeli citizens that they understand to be non-Jews.” That would include many immigrants from the former Soviet Union who are considered Jewish enough to move to Israel under the Law of Return but don’t meet the Orthodox standards necessary for recognition for other purposes.

“But even if you are registered as Jewish in the population registry that doesn’t necessarily mean satisfy the purposes of the rabbinate or Chevra Kadisha and they want more evidence to show people are Jewish,” Farber said. “The who is a Jew issue runs into the burial issue and people don’t want to deal with that. Just as one might choose to run to Cyprus to marry because the rabbinate questions their very identity, they might choose a civil burial society because nobody is going to question their identity.”

Needless to say, the burial societies themselves see things differently.

Such problems “are history” said Orit Masmi, the director of the Forum of Chevra Kadishas, an industry group representing a number of burial societies.

“It’s been 10 years by law that women can deliver eulogies and even say Kaddish. We never interfere and we never say to the audience to separate men from women,” she said. “About the babies, this is also history. The regulations about burying babies changed and we do let the women know where the baby is buried and if they want to we let them take part in the burial.”

As for the Russians, Masmi was equally sanguine, telling The Forward that “if we think someone is not Jewish we do try to find out because we bury Jewish people in Jewish cemeteries. I have not heard that there are problems with this because if [someone] is not Jewish they can still bury them in different sections of cemeteries.”

While not every city has a civil cemetery, over the past several years there has been a large push to increase the number of civil sections in existing burial grounds, she said. “There are lots of non-Jewish people and mixed couples and Israel and the state understand that they need to have an answer.”

However, for many, especially those who adhere to non-orthodox denominations, the picture is much more complicated than that, according to Yizhar Hess, the head of the Conservative movement in Israel.

“Today there are a few limited alternatives in several places in Israel,” he said, noting that given that the state only pays for funerals in the deceased’s city of residence or death, it is incredibly difficult to gain access to alternatives located in a different city. In Jerusalem, the Ministry of Religious Services was compelled by a court to allocate money to build an alternative cemetery to be run by an NGO jointly run by the Reform and Conservative movements but the money “has to be matched by money we have to raise ourselves. It’s far from being built.”

However, due to public pressure and a number of legal battles, “there is some flexibility we didn’t see before from the burial societies to allow more pluralistic customs to take place; for women to say kaddish and eulogize. In some places our rabbis are allowed to officiate the ceremony. So I do see some progress in these issues but it’s baby steps, it’s not a big thing.”

In Israel, Even Death Is Controlled By The Rabbinate