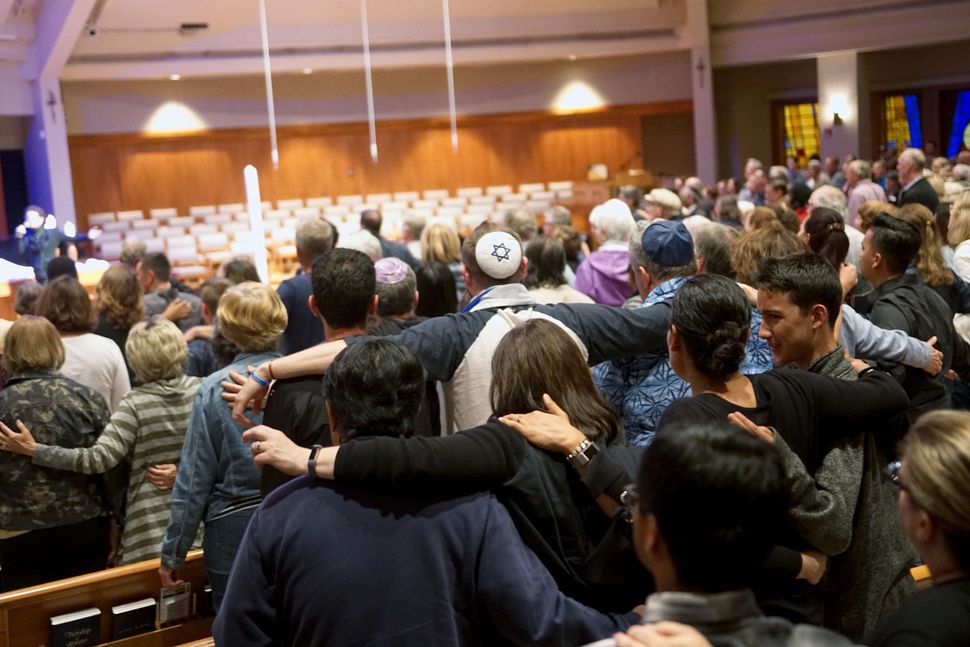 The Jewish community is once again in mourning. Another white supremacist shot up a Chabad synagogue in Poway, just six months after the most violent attack against Jews on U.S. soil in Pittsburgh.

And yet, despite the fact that the shooting was a horrific act of anti-Semitism, it was not just the Jews who were attacked yesterday. It is not just anti-Semitism that is to blame. And until we understand this, until we can truly grapple with the reality of what happened in Poway and at the Tree of Life synagogue in Pittsburgh, we will continue to be hamstrung by our own limited view.

Because the fact of the matter is, anti-Semitism is just one part of the worldview that resulted in these horrific acts. The other part resulted in the mass murders of African Americans and Muslims and immigrants.

And the Pittsburgh and Poway shooters were attacking every other minority group, too.

How do we know this? Because the terrorists themselves say as much.

In his manifesto after the shooting, Dylann Roof wrote openly about the need to solve the Jewish “problem,” and how he hoped that the movement he was part of could “destroy the Jewish identity.” Two years ago, [he requested that his attorneys be fired because one was Jewish and the other Indian. As Roof put it, “Because of my political views, which are arguably religious, it will be impossible for me to trust two attorneys that are my political and biological enemies.”

None of this is new. Jews have always been the center of white nationalist conspiracy theories. White nationalism’s motivating myth is not only the supremacy of whites. It’s a paranoid fantasy in which the United States and all white-majority nations are being invaded by inferior non-whites, hence the phrase “white genocide.”

In other words, white nationalism’s motivating myth is that Jews are behind a vast conspiracy to infect white countries with non-white and non-Christian peoples, to the point where great white civilizations fall. And since Jews often pass as white, they are seen as nefariously hiding among the white race to destroy them from within. It is the Jew, according to white supremacists, who is the key to all problems whites face.

Whenever a white nationalist is committing murder, then, they are not targeting one single group. They are targeting any and all people who do not fit into their view of what a white nation should look like — Jews included.

So as long as we keep looking at these attacks as singular, as focused on only one minority, we are missing the story that white nationalists are telling us about themselves. And if we do not wake up to this reality, we will keep ourselves blind to a terrorist and political threat that grows by the day.

And, of course, there are the terror attacks. Last year, 78% of extremist murders were committed by white supremacists (the rest were almost all connected to white nationalist ideology in some way).

What these numbers tell us is that we are not dealing with a bunch of whackos. We are not dealing with a small, fringe group of angry people, as so many of us are desperate to believe. We are dealing with a growing movement of extremists that live in our communities. They are homegrown, they are growing, and many of their talking points are regularly repeated in mainstream news sources like Fox News and Breitbart.

Worse, their most virulent beliefs and believers have a home on places like 8chan (used by both the New Zealand shooter and the Poway shooter), where their attacks are celebrated and encouraged.

And yet, still, we limit our discussions to each attack, as if they are not connected. When we speak of the recent spate of black church burnings in Louisiana, we can hardly imagine discussing it in the framework of forms of hate (despite evidence that the young man frequently commented on and engaged with neo-Nazi memes and pages.

This needs to stop. We need to have concrete discussions about white nationalism, and each attack committed by a white nationalist needs to be seen for what it is: an attack against every minority group.

Muslims were explicitly also targeted, for example. In the Poway shooter’s manifesto, he claimed that he had also been the perpetrator of an arson attack on a mosque in Escondido, California weeks earlier. “If you told me even 6 months ago that I would do this, I would have been surprised,” he wrote, but the New Zealand shooting motivated him to do the attack.

He encouraged those inspired by his shooting to target mosques and synagogues. And he went on to claim that Hispanics and blacks “are useful puppets for the Jew in terms of replacing Whites.” In other words, his views fit perfectly into the white nationalist worldview; when he attacked Jews, he believed that he was fighting all the races that threatened his own.

Imagine, then, if the racial and religious minorities targeted by white nationalists worked together to fight this scourge. Imagine if we didn’t just work on our own to demand the government do more and to call out the president and others who repeat white nationalist talking points (such as the Soros conspiracy that inspired the Pittsburgh shooter).

We have already seen glimpses of the power of such unity, but they have largely been relegated to inspiring acts of activism. The day after the New Zealand shooting, I showed up to stand with a group of Jews who had been organized by Congregation Beit Simchat Torah (a synagogue that serves LGBTQ+ Jews in New York) to stand in solidarity with Muslims going to pray at NYU’s Islamic Center. As I stood there, I discovered that CBST had built a long-standing relationship with the NYU Islamic Center. Since the moment Trump was elected, the Jewish congregation had shown up every Friday to show their solidarity with the Muslim community.

And so, when the Tree of Life shooting occurred, the same Muslims who had seen this form of beautiful solidarity greeted CBST synagogue-goers at their place of worship to show them that they were united in their fight.

It is likely you will soon see a viral story about Muslims in New York doing the same thing. Most likely, it will be partly due to this incredible act of reciprocal solidarity.

But we cannot stop there. And it cannot be relegated to only the Jews, Muslims, and minorities who recognize they are under the same threat. This must become a mainstream conversation, one where every white nationalist attack is understood as a deeper attack against others.

It may seem counterintuitive — even dangerous. But as we have seen with the example of CBST and the NYU Islamic Center, realizing that we are united in the danger so many of us fear is not a weakness. It makes us stronger than we can possibly imagine. And it will be the only way we can finally deal with the sickness that is infecting our nation and beyond: white nationalism.