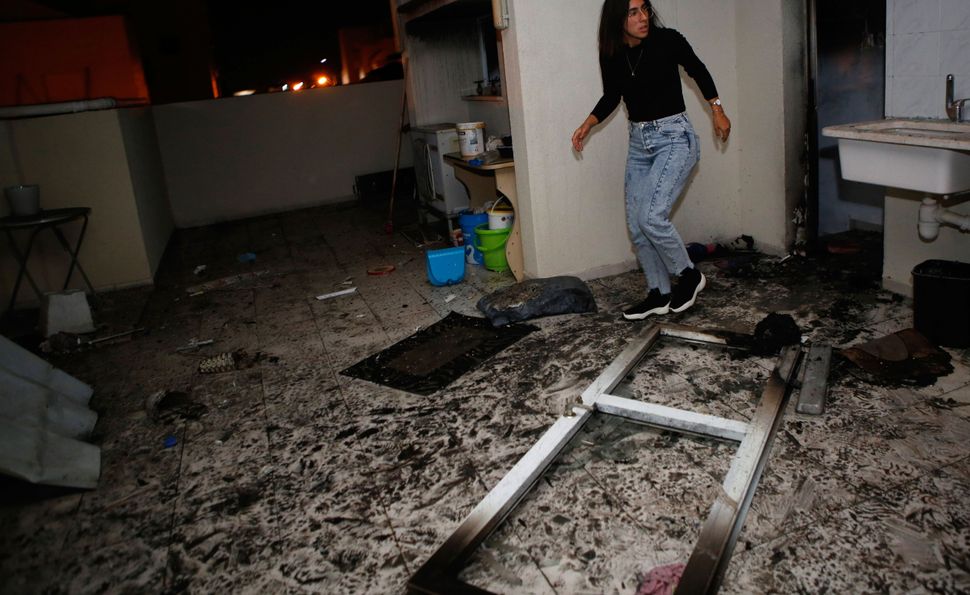 Last week’s escalation between Israel and Hamas was devastating. It was also avoidable, meaningless, and had little purpose aside from the respective flexing of muscles on both sides. 27 Palestinians and 4 Israelis paid for it with their lives.

Thankfully, it all passed quickly. Hamas and Israeli Prime Minister Benjamin Netanyahu reached another understanding; thus, Hamas launching hundreds of primitive, indiscriminate rockets was rewarded with a decent bribe, and Israel’s heavy pounding of Gaza’s caged population with airstrikes was requited with a short respite in the south, enough time for Netanyahu to whitewash his crimes for the duration of the Eurovision contest.

But in those three days, tragedies unfolded on both sides of the fence among the civilian populations held hostage to their recklessness and cowardly leaders. The footage of the evacuation of the maternity ward of Barzilai Medical center in Ashklon will forever be imprinted on my mind, as will the imagery of the two pregnant women in Gaza who lost their lives, or the anguished voice of one my closest friends, whose family’s home was obliterated in seconds in an Israeli airstrike. He told me the police had to forcefully drag him out of the building. He kept yelling at them to let me him inside his home.

#breaking #video evacuating the maternity eard of Barzilai Medical center in Ashklon. Seconds later the building was hit by a rocket. Damage was caused. All babies mothers and patients are ok. pic.twitter.com/dvsvx6hKwM

But the ugliest part of this spike of aggression is that it’s becoming a periodic, regular and normalized cycle, a recurring feature of life in Gaza and Israel’s south. Gazans are killed at the fence while demanding freedom; armed groups in the Strip launch vengeful rockets on Israel’s south; Israel retaliates with airstrikes; Hamas responds; invaluable civilian lives are lost; a ceasefire is brokered through which Hamas gets some Qatari cash and Netanyahu gets calm — until the next escalation breaks out.

This is the new normal: Another ceasefire built on the same fundamentally flawed and inherently destabilizing foundations of buying Hamas’s silence with another dose of humanitarian aid and moneybags every time its hardliners violently kick and scream for it. What it means is not peace but rather that the next escalation, in which more people will be butchered, is only a matter of time.

Gaza! Where Dreams are Deferred

My house and my apartment where I dreamed to settle peacefully are gone because [Israel](https://forward.com/fast-forward/423880/israel-space-agency-beresheet-2-moon-lander/) decided I mustn’t have dreams at all. pic.twitter.com/4eHPhTiOVt

Netanyahu could choose to respect the demands for a decent life coming from tens of thousands of Gazans who march nonviolently with their bare chests to the perimeter fence every Friday, knocking on the bars of the prison-like blockade to bring the manmade uninhabitability of Gaza to an end. Instead, only when hardliners in Hamas launch a bunch of primitive rockets on Israel’s south does Netanyahu finally listen and reward this violence with a meager bribe.

This immoral, ugly and criminal paradigm creates a dangerous incentive for more violence, the only way to be heard, bribed and pacified, and consequently bolsters the misleading notion that might is right while nonviolence is a waste of time.

And they say Arabs only understand force.

Netanyahu has been open about why he’s determined to avoid another war on Gaza — because it might lead to the Palestinian Authority taking over the Strip, which would, against Netanyahu’s agenda, advance the peace process. In other words, no one benefits more from Gaza’s current situation than Netanyahu. Our misery is his agenda. 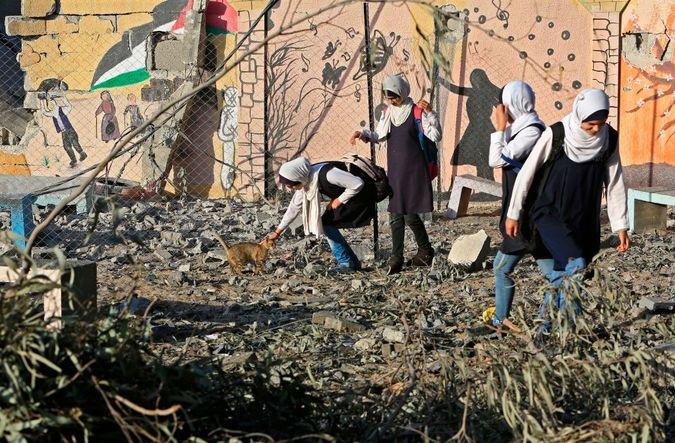 Palestinian students play with a cat in the courtyard of their school neighbouring a building that was destroyed by Israeli ai strikes, in Gaza City on May 8, 2019. (Photo by MOHAMMED ABED / AFP) (Photo credit should read MOHAMMED ABED/AFP/Getty Images) Image by Getty Images

If Israel truly wants quiet in the south, it has only one option: to lift the blockade. By introducing a fundamental and dramatic improvement in the lives of Gaza’s civilian population through the simplest of things, like providing continuous flow of electricity, or allowing civilians to travel in and out of Gaza to the West Bank, Israel would essentially create a new status quo that neither Hamas nor the Islamic Jihad would dare destabilize and risk bringing about the old experience of siege, isolation and immiseration.

After all, Hamas is a political faction seeking public approval; and challenging the miseries visited upon Gaza with force is their best strategy to garner popularity. Uprooting those miseries would deter Hamas from seeking a violent path that brings them back again; the costs, vis-à-vis public support, would be severe.

The opportunities and avenues that allowing life to find its way back to Gaza would open outweigh by far any security concerns that Netanyahu exploits to perpetuate a draconian solitary confinement of two million slowly-dying people.