This Week In Good Jewish News: Octogenarians Had Bat Mitzvahs And Seinfeld Saw ‘Fiddler On The Roof’ 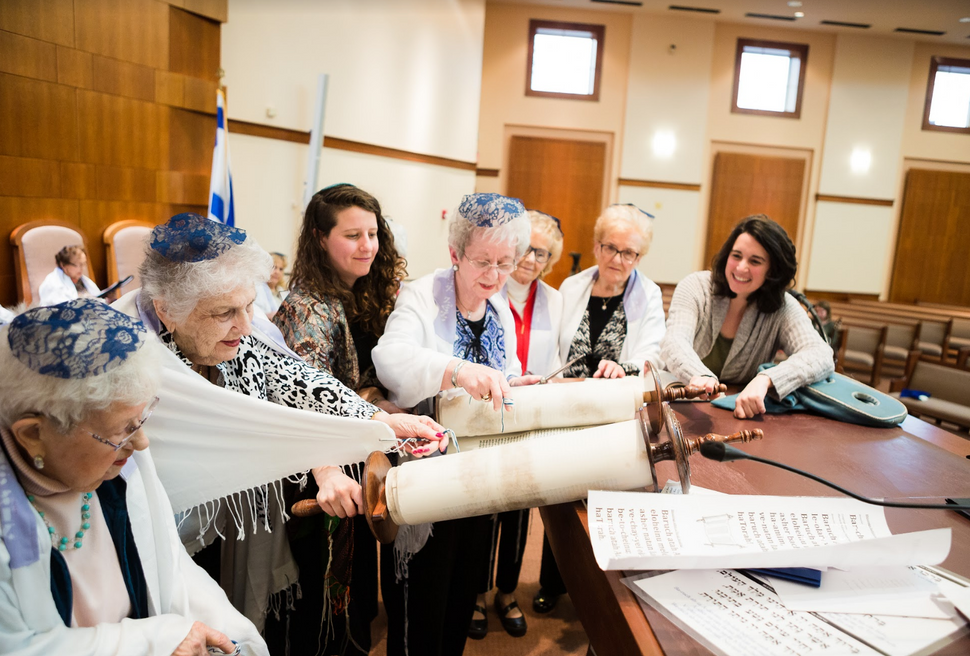 Women from the 2Life community are honored with an aliya, with student rabbi Giulia Fleishman Image by Ken Marcou

Bad news breaks every single day, and it breaks our hearts. But good news happens every day too, and reading it helps put the pieces back together.

Hallelu!: On shabbat last week, 21 women ages 85 to 97 years old became adults in the eyes of the Jewish community — they had bat mitzvahs. “I want to show my granddaughters that at any time in their life, no matter their age, if there’s something they want to accomplish, they can do it,” said Barbra, one of the women who officially entered the covenant on Saturday. The 21 women — and one man — are residents of 2Life Communities, a non-profit residence and community group for seniors of all backgrounds, deeply inspired by Jewish practices. Funded by the Stanley and Rita J. Kaplan Foundation, the group spent months studying and being tutored privately and together, and each crafted their own tallitot, or prayer shawls. At the Shabbat afternoon ceremony at Temple Emanuel in Newton, they took turns giving divrei torah, leading prayers and reading from the torah.

For most of the group, b’nei mitzvah was not an option in their early teens because of their gender, or because of Jewish persecution in the country where they then lived. One woman joined the group to help manage her grief after her husband died. Another, a convert to Judaism leapt at the chance to celebrate her bat mitzvah. One bat mitzvah, Edna Supnik, actually attended Temple Emanuel as a child. “We learned just like the young men did, and when it came time after four years, the boys were bar mitzvahed, and of course we three girls were not allowed. And so now the times have changed. I am so happy to read from the Torah,” she said.

Solidarity: Jewish-Arab coexistence group The Abraham Initiatives has received a 12 million dollar endowment fund, with initial donations from the Fohs Foundation, Orni Petruschka, Claude Ghez and the Alan B. Slifka Foundation, the Jewish Journal reports. Do you know how much hummus they are going to be able to make with that kind of money? But seriously, the Abraham Initiatives seeks to create Israel in the image its founders intended. The group’s mission statement promises to strive for a state “as embodied in Israel’s Declaration of Independence: A state which is the national homeland of the Jewish people and a full, complete and equal home for its Arab-Palestinian national minority.”

“Not by might and not by power”: An 11-year-old girl was reportedly sent to the principal’s office for trying to stop students from doing a Sieg Heil salute in class. “Stop it, put your hands down!” she shouted, according to her father, before being forced to leave class. A statement by McFadden School of Excellence in Tennessee to Buzzfeed News claimed that the girl had an “outburst” after seeing the salute given as part of a “Living History” class.

Torah: The name of this week’s parsha, Emor, means “speak.” The portion starts, as so many do, with God speaking to Moses, in this case about priestly holiness. The rules for the priests are strict, and don’t hold up much to our modern (or as some might call it, ethical) standards. If you are a priest and your daughter becomes a prostitute, for example, you are welcome to set her on fire. But what these rules really ask, if we look at them through the elongated kaleidoscope of Jewish history, is how do we become holy enough to offer food to God? One key that might help unlock the answer is in that first word — speak. We speak up, when things are wrong, like the 11-year-old girl who refused to have Nazi salutes in her classroom. We speak to each other, to create connection, like the Muslims and Jews who connect at the Abraham Initiatives. And we speak, and speak and speak our own stories, because they can bring truth and healing to the world.

This Week In Good Jewish News: Octogenarians Had Bat Mitzvahs And Seinfeld Saw ‘Fiddler On The Roof’