Most Jews Weren’t Murdered In Death Camps. It’s Time To Talk About The Other Holocaust. 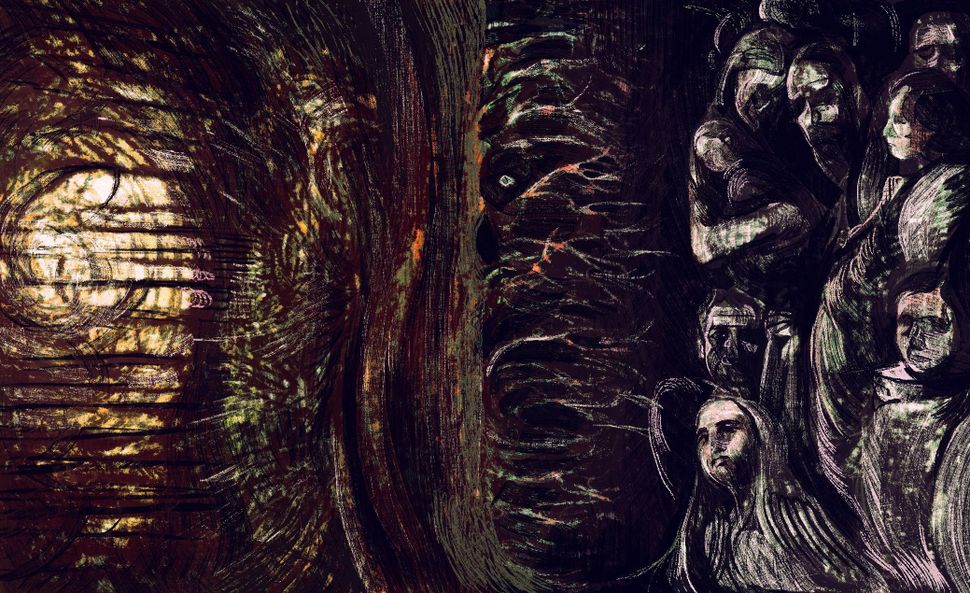 It was the tiny tallit that knocked the breath out of me. Slightly crumpled along the crease lines, as if just taken out of a closet where a loving mother had put it away after washing, it hung alone in its exhibit case at the Museum of Jewish Heritage’s new exhibit Auschwitz: Not long ago. Not far away. The specificity of the single life evoked by this toddler-size garment conveyed more about the tragedy of the millions than words ever could. It was as if it had traveled through time and space to bear witness on behalf of the little boy who once wore it.

Each artifact tells a story, each story reflects a life. As we move further away in time from the [Holocaust](https://forward.com/fast-forward/425373/holocaust-history-blogger-lied-auschwitz-family/), it is our duty to ensure #StoriesSurvive. “Auschwitz. Not long ago. Not far away.” opens May 8. Tickets here: https://t.co/2kOqtcGnSO pic.twitter.com/vswnYdkVwF

My experience at the Auschwitz exhibit was a powerful one. But it was actually a familiar one. We are used to experiencing the horror of the Holocaust through the lens of Auschwitz. When we talk about the six million, we picture concentration camps, ghettos, cattle cars.

And yet, the members of my family who were murdered during the Holocaust did not die at Auschwitz. They were killed at Babi Yar. And I cannot imagine an exhibit like this honoring their memory.

In part, this inability stems from the fact that after decades of silence and intentional forgetting, the material evidence of their lives and deaths is long gone — unlike the thousands of artifacts left behind by the Nazi concentration camps. But the main reason I can’t imagine an exhibit dedicated to the memory of my family is that their story as a whole is not part of our collective memory of the Holocaust.

The story of the Jews murdered not in death camps but by bullets, burning, gas wagons, intentional starvation, drowning, and hanging all over the former Soviet Union — an estimated 2.7 million — has been casually subsumed in the death camp-centered Holocaust collective memory. 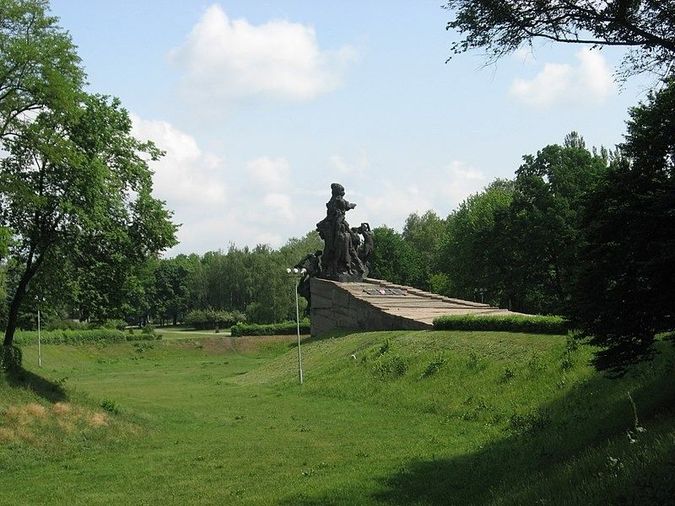 How many Holocaust by Bullets massacre sites can you name besides Babi Yar? I’m guessing not too many. Compare that to the extent the names Auschwitz, Treblinka, Maidanek, Sobibor are chiseled on your mind.

Oscar Schindler, Chiune Sugihara, Raul Wallenberg, and Irena Sendler are household names in our community. But can you name a single righteous gentile east of German-occupied Poland?

We know of Elie Wiesel, who survived the hell of Auschwitz to bear witness about the horror of the Holocaust. But have you ever heard about Dina Pronicheva, who climbed out of Babi Yar and left a searing testimony of the experience? 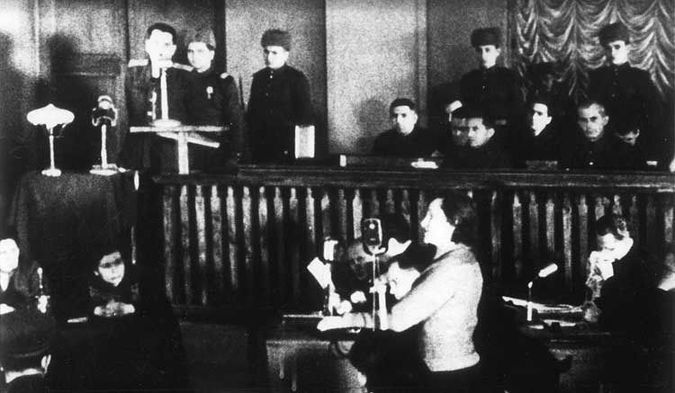 Dina Pronicheva on the witness stand, 24 January 1946, at a Kiev war-crimes trial of fifteen members of the German police responsible for the occupied Kiev region. Image by Wikimedia Commons

Did you know that it was Romanians, not Germans, who occupied Odessa and decimated its historic Jewish community?

I could go on. These stories are part of our history. But they are not part of our collective memory.

To be sure, there are reasons for that. The Soviets didn’t want to acknowledge Jewish suffering as a unique experience, so the Jews in these territories died twice: first physically, at the hands of the occupying forces and their local collaborators, and then a second time, at the hands of the Soviets who wanted to wipe out their memory.

The holes this has left in our collective memory are huge. Even our major Holocaust memory institutions like Yad VaShem and the Holocaust Museum in Washington, DC still barely reflect that story. Scholars only got access to Soviet archives in the 1990s, and museums are slow-moving institutions. It takes a while to rework a permanent exhibit.

But it’s also a self-fulfilling erasure. Remembrance builds on itself. People go where memory infrastructure is set up. A million people visit Auschwitz every year. 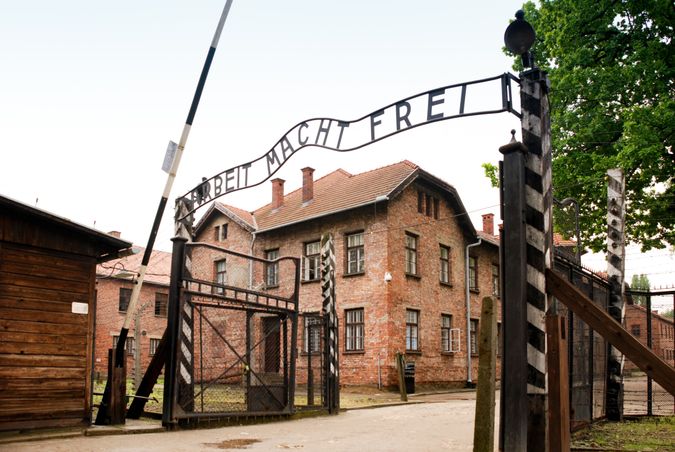 Entrance to the Auschwitz Concentration Camp Image by Wikimedia Commons

Meanwhile, a major memorial worthy of the tragedy of Ukrainian, Lithuanian, Belarussian or Moldovan Jewry has yet to be built in any of those countries. In the Snakes Ravine in Russia, where 27,000 people were murdered, authorities have resisted attempts by local memory activists to confirm the names of the dead. Attempts to build a major Holocaust memorial complex at Babi Yar have repeatedly fallen victim to local politics (although that may now be changing.)

There is nothing like a personal visit to get a feel for the difference in the way the “western” and “eastern” parts of the Holocaust story are remembered. Last summer, I helped organize a trip to Ukraine for my synagogue, and one member — Lea Herzfeld, a teen who went with her family — had a remarkable response. At the end of the trip, she wrote a poignant Facebook post exploring this difference. Her earlier visit to Auschwitz and Treblinka, she said, had been a devastating experience, but it also left her feeling something of a triumph; after all, the Nazis had failed, while she and her friends were still there, proudly Jewish.

Ukraine gave no such opportunity for catharsis. There were no visitors’ centers and tourist information booths. It was a raw experience that included stumbling upon a vandalized grave at a major Holocaust-era massacre site and reburying the bones. It left her feeling “angry at the Nazis who did cruel and horrifying deeds. Angry at the Ukrainians who seem to have chosen to ignore the past. And angry at my fellow Jews who go only where is established.” Pointedly, she asked: “Who chose Poland to be the place where tortured Jews are remembered?”

And that is the crucial question for us as one of the most affluent and numerous Jewish communities.

Somehow in telling the story of the Holocaust, we have managed to leave out half our dead. We’ve told ourselves half the story. And while the material objects from the Holocaust in the USSR may be gone, the bones of the victims are still there. They lie in unprotected graves, they get in the way of commercial construction projects as they did recently in Belarus, and they get desecrated.

To be sure, there are local memory activists doing commemorative work in these countries. In fact, those I know do it on a voluntary basis, with no financing for their projects and no pay. Many are not even Jewish. They do it because they care deeply about the history of their towns and villages and about the people — the Jews — who used to live there and are no more.

But against the scale of atrocities that took place here, these efforts are minuscule. We cannot expect that they will do the work of remembering for us. They are waiting for us to come, with our know-how and our financial and organizational abilities, to become their partners.

A lot of time has passed. In this region, the last vestiges of what used to be a rich Jewish culture are rapidly disappearing. We need to start incorporating these stories into our collective memory. And we need to start thinking of them as our own.

We can begin by including the stories of Ukrainian, Russian, Moldovan, Belarussian, Lithuanian, Estonian and Latvian Jews on major Holocaust commemorative events. We could also learn about additional dates when commemoration might be appropriate. One such date is right around the corner: June 22, the date Nazi Germany invaded the USSR. It was then that mass murder of the Jews began in earnest ultimately paving the way to the Final Solution.

Auschwitz is undoubtedly our shared heritage. But so are Babi Yar, Zmievskaya Balka, Rumbula, Drobytsky Yar, Pechora, Malyi Trostinets, and the estimated 2,000 other places. Our Holocaust memory work is not done yet. The hardest part, in fact, may still lie ahead.

Izabella Tabarovsky is a scholar with the Kennan Institute at the Wilson Center in Washington, DC. Her research focuses on Holocaust in the USSR, politics of historical memory, and anti-Semitism.

Most Jews Weren’t Murdered In Death Camps. It’s Time To Talk About The Other Holocaust.