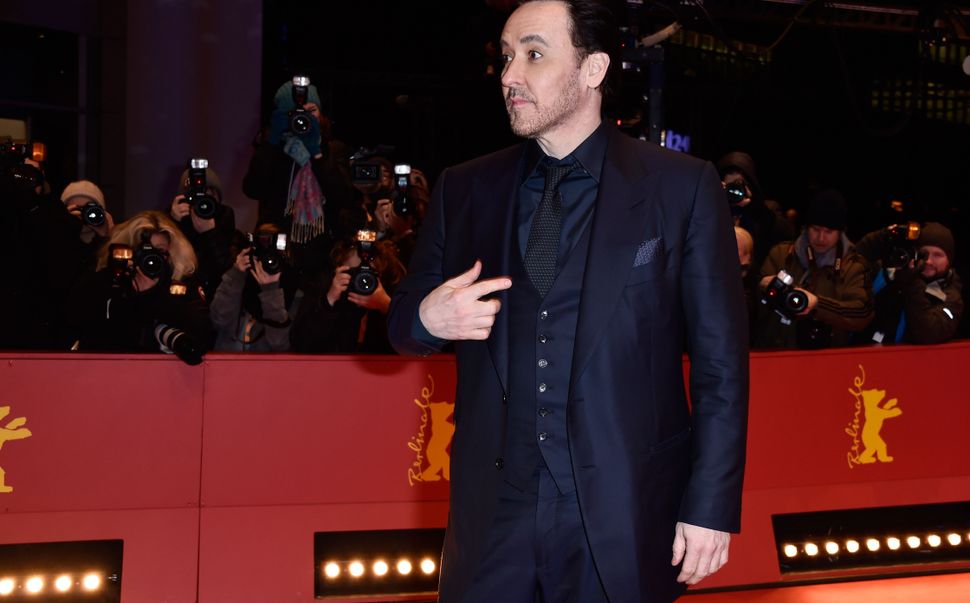 And this week’s anti-Semitism controversy comes to you courtesy of… John Cusack!

Yes, here we go again: A public figure tweets something anti-Semitic, semi-apologizes, and then we move on to the next outrage.

My weary tone doesn’t mean I’m not upset by Cusack’s actions. The meme he shared is indeed unambiguously antisemitic: An image of a Jewish hand, marked by the star of David, crushing the people, accompanied by the quote, “To learn who rules over you simply find out who you are not allowed to criticize” — erroneously attributed to Voltaire, but actually from a neo-Nazi called Kevin Alfred Strom. Cusack added his own gloss, a glibly hateful “Follow the money.”

This was all bad enough. But in some respects, it was his confused attempts to atone that frustrate me most. He first defended the tweet, citing Israel’s “atrocities against the Palestinians,” then conceded that “even if you don’t have an anti-Semitic bone in your body, it is still an antisemitic cartoon”. He then explained that he initially thought the start of David signified Israel. Now he understands that yadda, yadda, yadda. He never did address the “Follow the money” quip.

3. John Cusack repeatedly defended his tweet before deleting it.

His “bot” excuse is absurd. pic.twitter.com/Jm2NArFVEO

My frustration is partly because, given the incessant controversy over anti-Semitism, it’s extraordinary that anyone can claim ignorance anymore. Was Cusack asleep during the firestorm surrounding Ilhan Omar’s “All about the Benjamin’s” comment? I’m also frustrated because the implication of his apology was that, had there been a symbol that could signify Israel without implying Jews, it would have been fine. I say this not as a defender of Israel, but as someone who believes that the Palestinians are being oppressed not by a world-conquering venal conspiracy, but by regular human beings.

I’m sure that one conclusion that could be drawn from people still tweeting such things even now is that whatever apology they make can only be false, that ignorance can no longer be an excuse, that only true anti-Semites will share these memes. However, I still resist that conclusion. Aside from the fact that I don’t have a window into John Cusack’s soul, we underestimate the temptations of social media at our peril.

It’s the easiness of social media that is our downfall. Did John Cusack ponder his post for hours until he got it just right? Almost certainly not: I would guess that he was in the queue for the dry cleaners, sitting on the toilet, or half-watching TV when he lazily pushed the button.

None of that means that there wasn’t something real behind his desire to post. Anger on behalf the Palestinian people is of course not, in and of itself, illegitimate or anti-Semitic. Cusack may have been moved by very real suffering.

But what is truly poisonous about social media is that it provides a constant temptation to respond to genuine concerns in a facile way. Too often, we are drawn into a simplistic logic: I am angry about something, I want to address the cause of that anger, I will express my anger in the strongest possible terms, I will hate, I will draw on the most convenient way of expressing that hate.

And in the case of Israel-Palestine, anti-Semitism offers the most convenient form of hatred.

I don’t think we really know how to respond to convenience anti-Semitism of the Cusack-variety. Too often, Jews are working with an implicitly essentialist model of anti-Semitism in which a particular anti-Semitic incident is evidence of a wider world view that is implicitly or explicitly anti-Semitic. But what if there is no world view at all? What if all that exists are the lazy pleasures of hating, generated by equally lazy forms of empathy?

It’s no comfort to recognize that the superficiality engendered by online convenience is a much wider problem. Many of us fall prey to it. I once felt briefly gratified when I tweeted a very rude word in response to a British TV psychic who claimed to have made contact with an abducted toddler in the spirit world. My tweet didn’t stop him being terrible, and it didn’t make me a better person.

John Cusack’s tweet didn’t help the Palestinian cause and it didn’t stop him from ruining his reputation.

What we desperately need right now is a collective effort to try and nurture a more reflective, less convenient, online discourse. This is probably a generational project and it’s difficult to know where to start. Still, it’s worth considering how, when we call anti-Semitism out online, we can refrain from the lazy hatred that Cusack expressed.

Might a patient, clear and calm explanation of where Cusack went from work better than mass derision and anger? One challenge here is that even those tweets that are carefully expressed can, if joined by many others, create a cumulative effect that ends up looking like a hate campaign — so-called “dogpiling.” I spent a portion of yesterday being accused by one tweeter of doing just that, despite trying (sometimes successfully) for years to be as civil as I am able. It may be that online restraint, posting only when one has something new and different to say, is the model to follow.

Restraint is not a fashionable virtue these days. Perhaps though a counter-cultural emphasis on not saying immediately what is on your mind could popularize the practice. Even then though, for a film star with declining name-recognition, the desire to be heard and state that “I am still here” may be too strong to resist.

Keith Kahn-Harris’s book Strange Hate: Antisemitism, Racism and the Limits of Diversity is published on June 11 2019 by Repeater Books.