How Young American Jews Made Palestinian Rights All About Themselves 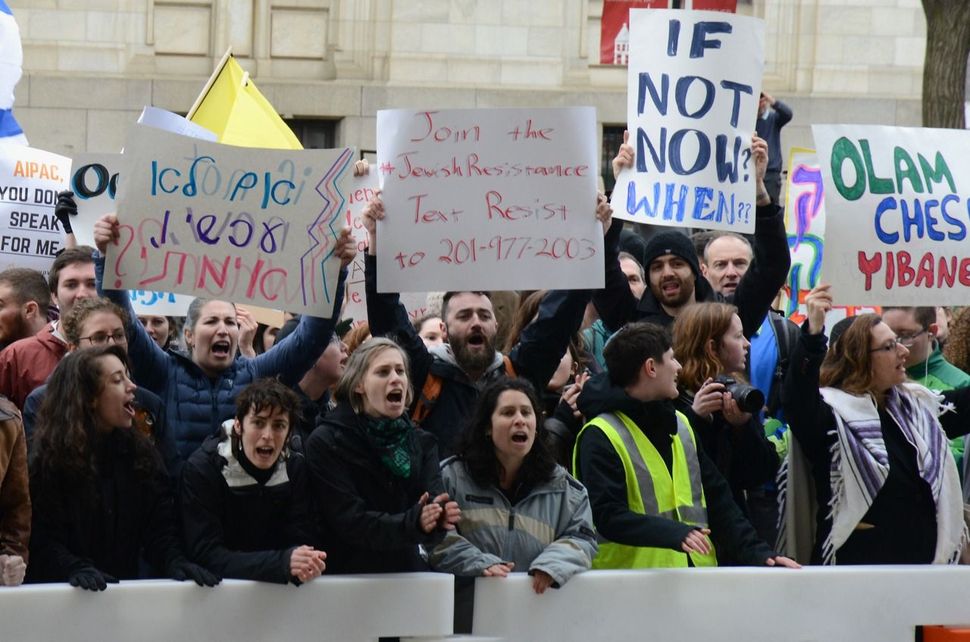 There’s a lot of talk about how young American Jews are abandoning Israel. It’s spoken of as an existential threat for the American Jewish community, whose identity is so tightly bound up with Israel education and advocacy. But this account is wrong on two fronts.

Young Jews aren’t abandoning Israel so much as vocally opposing its occupation of the Palestinians – a valuable corrective for an erstwhile complicit community. Moreover, they are doing this work from within a framework that far from rejecting the paradigm of their parents simply repurposes it.

The so-called abandonment of Israel has been ushered in by organizations like IfNotNow and J Street U, organizations which are as centered around Israel (and its proxies in the U.S. like Birthright) as the community they criticize. In giving young Jews a valuable institutional space and vocabulary for opposing Israel’s occupation, these organizations have simply replaced their parents’ adulation of Israel with their own opposition to it as the main component of American Judaism.

Even more surprising is the fact that young Jews portray the pursuit of justice for the Palestinians through a decidedly Jewish lens. Their materials and their members are steeped in what they view as the Jewishness of this struggle, something they share with the right whom they seek to replace. This choice is not inconsequential. For embedded in the language they have developed to do the crucial work of opposing the occupation is the appropriation of the Israeli-Palestinian conflict as an avatar for their own unformed identities, and the erasure of the very people they are trying to help.

Take, for example, J Street’s new youth tour, launched last week and billed as an “alternative” Birthright for progressive minded Jewish-Americans, called “Let Our People Know.” On the tour, college-aged Americans from Pittsburgh, St. Louis, New York, and Miami visited the Palestinian cities of Ramallah and Hebron. They also talked with settlers, and went to Yad Vashem. The tour promised its participants an “Occupation 101” crash course, in direct response to Birthright, which is viewed by its critics as a one-sided view of Israel.

But the J Street joint has at least one thing in common with the settlers its participants will visit, who are no doubt meant to represent the dangers of the occupation: the use of Judaism as the source material for its views.

“Our work is grounded in the Jewish and democratic values on which we were raised,” J Street’s founding principles state.

This use of Jewish values to justify political views is something J Street shares with the right that it seeks to replace. For the right, mixing religion and politics is par for the course: Religion justifies everything from occupying the Palestinians to building the Third Temple to putting a sledgehammer through a brick wall in a dubious historical site. It also gives the right demagogic ammunition to attack their liberal counterparts for being “anti-Semitic” and to lambaste others as Postmodern-Post-Zionist, self-hating Jews.

How ironic that these efforts by younger American Jews to question these ideas and Israel’s policies, and to break with their parents by even being willing to utter the word “occupation,” stem from the same source as those ideas they oppose: the idea that engaging with Israel is inherent to one’s Judaism.

The same problem plagues IfNotNow, a millennial organization that opposes the occupation. The younger, more radical sibling of J Street, IfNotNow is not a Zionist organization. But the impulse to resist Israel’s crimes still comes from religion. IfNotNow’s manifesto states that the young activists who founded it were inspired by the rabbinic sage Hillel. It goes on: “Just as Moses was commanded to return to Egypt and fight for the liberation of his people, we too feel called to take responsibility for the future of our community. We know the liberation of our Jewish community is bound up in the liberation of all people, particularly those in Israel and Palestine.”

IfNotNow’s leaders liken themselves to Moses atop Mount Horeb; they are the ones to bring liberation to Jews and Palestinians (Israelis are not mentioned). In line with this manifesto, their actions are steeped in Jewish religious practice, like the time they organized a Kaddish to lament the loss of Palestinian lives in Gaza.

The Mourner’s Kaddish for those killed in Gaza. As the Mishnah proclaims: “Whoever destroys a single life…is considered by Scripture to have destroyed the whole world.” pic.twitter.com/fGZygsRoDx

This isn’t about ending the Israeli-Palestinian conflict. Just like the fanatics on the right, for the young American Jewish left, Israel is viewed as a kind of justification for Jewish-American values.

Birthright, and now J Street’s trip, give an almost Orientalist tinge to these American efforts: Young Jews tour Israel on an expedition to “transform the future of Judaism” as Birthright promises or “Let Our People know” as J Street does. Then there’s IfNotNow’s “You Never Told Me” campaign: Me.

The American Jew is at the center of this learning experience. Israeli and Palestinian subjects are erased.

When J Street or IfNotNow talk about Jewish values and Jewish liberation, they not only exclude Palestinians and non-Jews, but they appropriate the struggle to fit their own worldview and create an identity for themselves.

This is not to say that progressive American Jews are the same as the right or the occupation apologists, or the pundits paying lazy lip service as a means to “liberal-wash” Israel. American Jews have always been front and center in every human rights struggle in the 20th Century. They are and should be an essential part of the movement to end the occupation and make Israel a state where there’s equality for all.

But what unites leftists in Israel, Jew and Arab alike, is not “Jewish values” but international law. What unites the left is not seeking to advance the Jewish community, but the fight for basic human rights — for everyone.

What holds this coalition of resistance together in Israel, away from protests outside of Birthright’s New York headquarters, is not religion but citizenry. Being a citizen means you’re an American or an Israeli that deserves the same basic rights, and when you see someone who doesn’t have the same civic rights, like the Palestinian people, you can demand they should simply have the same.

And if a Jewish reference is still needed to remind ourselves how we fight against dehumanizing of other people, let’s remember the word of Hillel who taught, “Where there is no man, be thou a man.”

Where there is injustice, one need not be a Jew to oppose it. It is enough to simply be human.

How Young American Jews Made Palestinian Rights All About Themselves