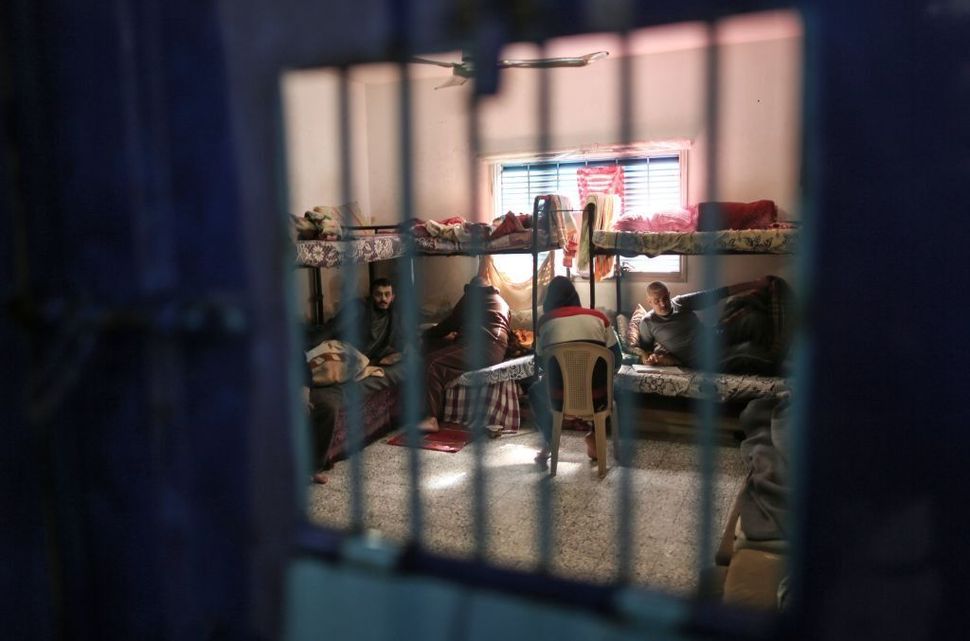 TOPSHOT – Palestinians who are unable to pay off their debts, sit in a cell in a Hamas jail in Gaza City on February 20, 2018. Over 40,000 Gazans were charged in 2017 with failing to keep up with debt payments as the economy in the Palestinian coastal enclave of two million, sandwiched between Israel, Egypt, and the Mediterranean collapses with around 600 businessmen currently in jail, according to Hamas’ police. / AFP PHOTO / MAHMUD HAMS (Photo credit should read MAHMUD HAMS/AFP/Getty Images) Image by Getty Images

Trump’s envoy for Mideast Peace, Jason Greenblatt, has a peculiar habit. He likes to troll Palestinians on Twitter. He mostly tweets out unsubstantiated claims that reiterate right-wing Israeli propaganda, or insensitive statements glorifying Netanyahu’s rightwing government, whitewashing its systematic assault on the peace process. And of course, there’s Greenblatt’s repeated claim that the Palestinian Authority pays convicted terrorists a reward to incentivize murdering Jewish civilians. “Pay to Slay” Is what he called it in his latest tweet.

Again & again & again the PA ignores the countries that graciously donate assistance for the Palestinians by INCREASING its funding of its DESPICABLE “Pay to Slay” program BY OVER 11% in the first months of 2019. Why do the donor countries tolerate this?

Greenblatt did not invent the “Pay to Slay” canard. It’s already been propagated by Israeli Prime Minister Benjamin Netanyahu and his cabinet, despite being granted two Pinocchios by the Washington Post’s fact checkers.

Neither Greenblatt nor Netanyahu have provided evidence to back their claim that the PA rewards Palestinians for “murdering Jews,” with an increase in the reward concordant to the number of Jews killed. And yet, these claims were used to push the Taylor Force Act through Congress.

The truth is rather more complicated. Official records show that back in 1964, the Palestinian Liberation Organization created a “Martyrs Fund” to aid and compensate all Palestinians killed, detained, or wounded by Israel as casualties of the conflict and the struggle for independence.

After the Oslo accords were signed in 1993, the PA maintained the fund as a counterbalance to the occupation, to last until the occupation came to an end.

It also maintained the fund because the issue of Palestinian prisoners and martyrs was of cultural and historical importance. Indeed, the payments have a different connotation inside Palestine than outside. Locally, Palestinian prisoners and martyrs are usually seen as either victims or heroes who paid great personal sacrifices in pursuit of their freedom and dignity.

Rather than viewing these payments as rewards to violent terrorists, Palestinians view them as compensation to Palestinian victims of the Israeli occupation, itself a violent force.

And if some terrorists are also recipients of the funds, Israel’s penchant for imprisoning Palestinian nonviolent activists and for keeping Palestinians jailed indefinitely under administrative detention without a trial, has rendered Israel’s claims to who is a terrorist and who is not immaterial. With a conviction rate of 99.74% for Palestinians, Israel’s military courts are justly regarded as kangaroo courts within Palestinian society.

Worse, the UN recently reported that Israel detains 300 Palestinian children, mostly for social media posts or for throwing rocks, a charge that is punished by up to 20 years in prison if the perpetrator is Palestinian (Israelis convicted of throwing rocks are at best sentenced to community service, if not let off the hook entirely).

About one million Palestinians have been imprisoned by Israel since 1948 under these conditions. And while some were certainly terrorists, a huge portion of them were not, and are not. The Israelis know this, just as we Palestinians do. And it radically compromises Israel’s ability to maintain the moral high ground, drunk on outrage, over the Palestinian Authority’s payments.

The aid money that the PA gives to injured or imprisoned Palestinians and families of Palestinian martyrs isn’t a reward as much as a welfare handout that’s meant to keep afflicted Palestinians off the streets rather than leaving them prone to further radicalization from extreme poverty. The monthly allowance comes to around 1,000 shekels, or $327.

The families of detained or murdered Palestinians receive a similar monthly salary based on the number of household members. But again, this is a form of welfare more than a kind of reward, a way of keeping a family whose primary breadwinner has been killed or imprisoned off the streets.

Additionally, released Palestinian detainees and their spouses, and children of Palestinians murdered by Israel receive tuition-free education and a small monthly handout, which plays a significant role in their rehabilitation. They usually stop receiving the money as soon as they are reintegrated into the labor market. This was the case with a friend of mine, whose family was being supported by his older brother, until that brother was killed in the Second Intifada. My friend and his younger siblings were given a free education, care of the Martyrs Fund. He’s now a celebrated writer.

If the fund didn’t exist, he tells me, “I would have been forced into child labor and never left the refugee camp.”

It’s just not a free for all reward system for terrorists. And recently, to comply with international demands, the PA cut off the salaries of about 1,600 families of Palestinians detainees and martyrs under the pretext of the beneficiaries’ association with Hamas.

These are what sustain the existence of the PA Martyr Fund. Mr. Greenblatt should consider criticizing them for once.