We Palestinians Condemned A Leader’s Anti-Semitism. Will It Matter? 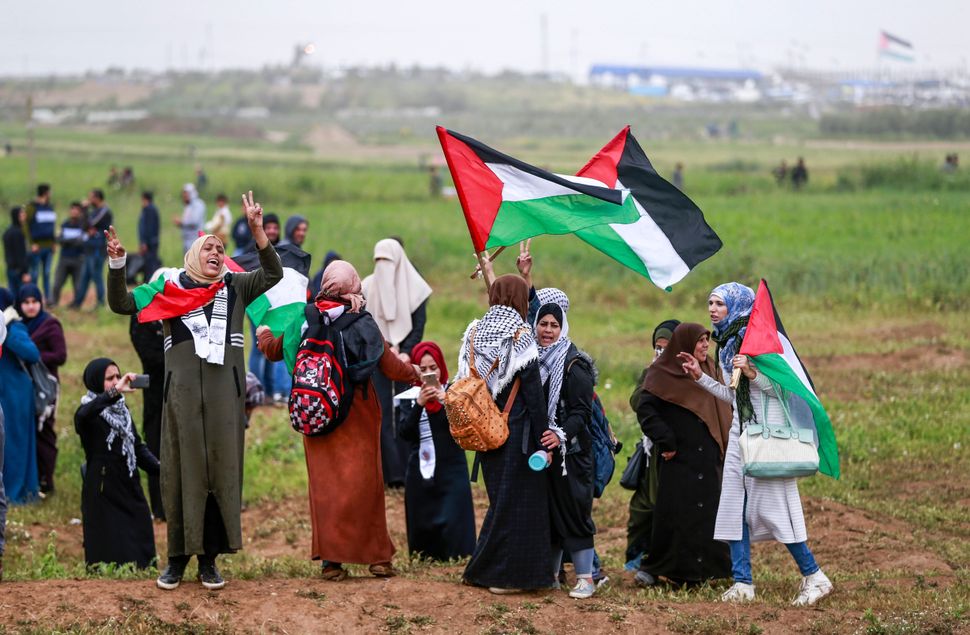 Last Friday, the controversial Hamas leader Fathi Hammad made some particularly vile comments during the weekly Gazan Return March protests. In the context of calling on Israel to lift the blockade on Gaza, Hammad promised, in the most extreme terms, to pressure Israel with all possible means. He then called on all Palestinians to “slaughter Jews” worldwide if the blockade wasn’t lifted next Friday.

Expecting applause from Gazans — which never came — Hammad then went even further, describing a Hamas factory for making explosive belts which, according to close sources in Hamas, does not exist.

Controversy and exaggeration are nothing new for Hammad. It’s earned him a poor reputation and he’s hated across the Gaza Strip and even inside Hamas itself.

But if his statements are not supported by average Gazans, they are always well received in another arena: anti-Palestinian propagandists. For example, when Hammad implored Arab neighbors to support Hamas, claiming that “half of Gaza is Egyptian and the other half is Saudi Arabian,” groups like the Middle East Media Research Institute translated and published his words, circulating them to delegitimize the national Palestinian struggle for statehood.

And though I haven’t seen a single Palestinian promoting or defending Hammad’s latest hateful statement, his poisonous performance was applauded on the other side of the fence. No less a persona than Netanyahu’s spokesman literally thanked Hammad for providing very valuable quotations that Netanyahu would use to “reveal Hamas’s true face.”

In other words, Hammad’s disgusting anti-Semitic comments will act as a pretext to perpetuate the Israeli blockade and occupation. His statements will be generalized with bizarre moral inferences to showcase that Palestinians are unworthy of solidarity and sympathy, and that our suffering is entirely “self-inflicted” by the “dedication to destroy Israel,” as one always hears.

Meanwhile, no one seems to care what we Palestinians feel when we hear such outrageous anti-Semitic comments.

The truth is, we abhor them. When I watched Hammad’s speech, I was outraged by the hatred, the machismo, the pure darkness his words embodied. And I was not alone. Hammad’s rhetoric absolutely does not represent us Palestinians at all.

The disgraceful speech instantly sparked widespread denunciation in Gaza and the West Bank from different political and grassroots groups.

PLO Secretary General, Saeb Erekat denounced Hammad’s rhetoric and wrote: “The just values of the Palestinian cause include love for freedom, justice and equality. The repugnant statement of Hamas leader Mr. Fathi Hammad about Jews doesn’t represent any of them. Religion shouldn’t be used for political purposes.”

The just values of the Palestinian cause include love for freedom, justice and equality. The repugnant statement of Hamas leader Mr. Fathi Hammad about jews doesn’t represent any of them. Religion shouldn’t be used for political purposes #Palestine https://t.co/NmcxBtVMKt

Furthermore, in a public statement, Hamas officially denounced Hammad’s comments and insisted that they don’t represent the movement. Senior Hamas leader, Ahmed Yousef, argued that “the call for killing Jews stands in violation of [our] religion, principles, moral values, and contradicts the [new] Hamas charter.”

And well-known Palestinian Human Rights Defender, Issa Amro, strongly condemned Hammad’s rhetoric and argued that it’s “not part of our tradition nor religion.”

I condemn strongly what Fathi Hammad said. It is not part of our tradition nor religion to ask to kill the Jews. No one should be targeted based on religion.

Amro eloquently concluded that “in a free society, hate like Hammad’s fizzles and dies. In an unfree society where millions are subject to injustice, siege, and Apartheid, this ugliness can sadly catch. Ending Israeli Apartheid and occupation will stunt the growth of this hate more than anything else.”

Palestinians are using Hammad’s comments to draw a clear distinction between acceptable demands, like our struggle against the occupation, and anti-Semitic dogmatic notions like those of Hammad. This incident opened a chance for a lively debate to emphasize that our struggle is never against our Jewish sisters and brothers, but rather against the injustice we’re living beneath called the occupation.

It essentially ignited an ongoing Palestinian call for refraining from conflating Israel with Jews, which is crucial because in the isolated, blockaded and impoverished Gaza Strip, people usually use the words Israelis, Zionists, Occupiers, and Jews interchangeably without realizing the consequences or sometimes the difference.

Veteran Gazan journalist, Khaled al-Haroub, used Hammad’s comments to draw some critical and crucial lessons in a note entitled “Whenever that man talks, we Palestinians lose.” Al-Haroub noted that Islamic religion doesn’t tolerate such calls to “kill Jews,” and overemphasized that “Palestinians unanimously, including Hamas, agree” that our conflict is only with Israel.

Finally, our Jewish sisters and brothers around the world have for years shown us remarkable and inspiring solidarity, compassion and sympathy. Anti-occupation activism to help Palestinians realize a dignified and free life is now becoming vibrant and widespread more than ever.

It’s crucial for us to denounce and protest such anti-Semitic language whenever it crops up in our struggle for freedom and dignity. We must keep our struggle from getting polluted by such poisonous and dehumanizing notions.

This shameful incident should open a window to go beyond denouncing and protesting anti-Semitic rhetoric. It should help us build bridges of mutual respect and solidarity with our Jewish sisters and brothers around the world in the quest of combating hatred and racism.

We Palestinians Condemned A Leader’s Anti-Semitism. Will It Matter?