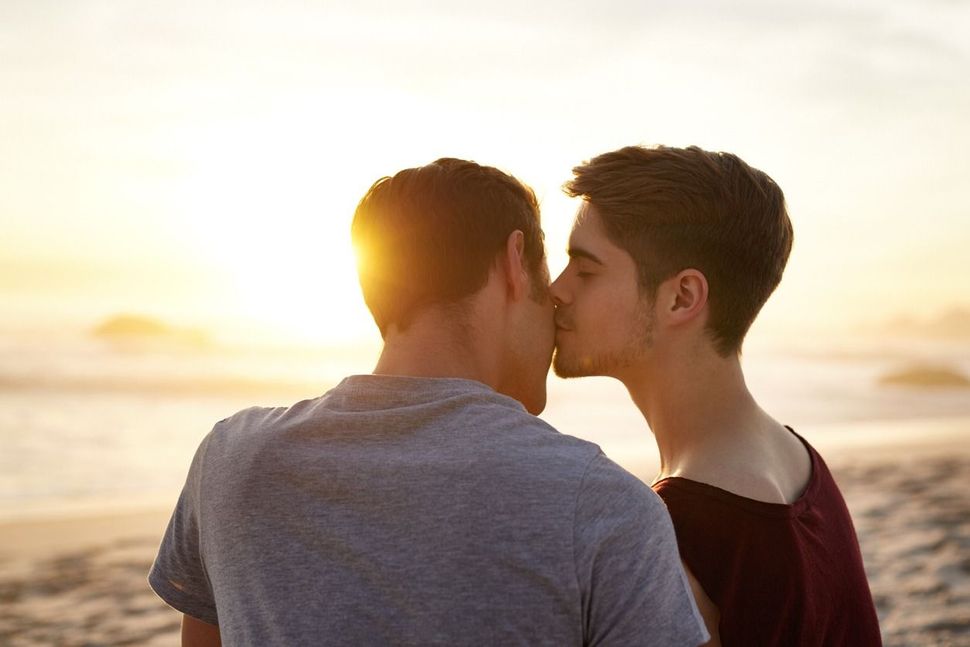 Gay couple having an intimate moment Image by iStock

Is a person’s sexual orientation immutable, predetermined, biological, and unchangeable? Or is it suppressible, environmental, sociological, and fluid? Today’s Orthodox Jews are of two minds on the issue.

If you ask Netanyahu’s Education Minister Rafi Peretz, he will tell you that the latter is the case. He will say that Conversion Therapy works, and that he personally knows at least one Jew who has successfully undergone a conversion from gay to straight.

If you ask Rabbi Shlomo Riskin of Efrat, a man who occupies a distinctly more progressive corner of the Orthodox Jewish world, he will tell you that being gay is not a choice at all. He will tell you, as a growing contingency of Orthodox rabbis will, to be “compassionate” to queer Jews. Some are even taking it further, arguing that homosexuality can (theoretically) be permitted under Jewish law by right of “Ones Rachmana Patra,” a principle which states that one is not guilty of a sin which one has been forcibly compelled to commit, e.g., at gunpoint.

At first glance, it seems clear that the view which welcomes queer people because their sexual orientation is not of their choosing is the liberal one, while the view which sees queerness as mutable, which would subject queer youth to Conversion Therapy — with all the risks of depression and suicide it entails — is a regressive one.

In truth, these two approaches are not actually all that different. They both rest on the same assumption: that being queer is bad, a strange mixture of sin and disease. If it is curable, one must cure it, a lá Peretz. If it is not curable, the treatment must be palliative, a lá Riskin.

It’s not, of course, just the Orthodox world that’s struggling with this. Lady Gaga’s gay pride anthem “Born This Way” felt passé when it was released in 2011. The discourse around queer people when I was growing up in the 90s and early aughts often centered on whether or not being queer is a choice. Even as a child I recognized the absurdity of this line of argument, which politicized the search for a “gay gene” and forced queer people to defensively put ourselves in some kind of box.

Cynthia Nixon raised eyebrows and elicited jeers when she dared to express that she “chose” to be a lesbian. And while I, personally, do feel that I was “born this way,” I sympathized with Nixon when she was dragged for “speaking her truth.”

As far as I can tell, Nixon is an outlier. Still, queer people shouldn’t have to hide from outliers or deny their existence for the sake of defending ourselves against the charge of choosing. Against this charge, we have a strong case. The science seems to back up the position that sexuality is biologically determined. No, they didn’t find a gay gene. But they didn’t find a straight gene either.

Still, we must ask ourselves why we are defending against the charge of choosing in the first place. Is it a relevant or legitimate charge? In America, Jews are protected against religious persecution. This goes for converts as well as those born to Jewish families. So why is the question of choice relevant to the question of gay rights?

It is only relevant if the baseline assumption is that straightness is natural, healthy, joyful, and moral — and that queerness is unnatural, unhealthy, miserable, and immoral.

I don’t remember ever choosing to be gay. My mother claims she knew when I was just two years old. Looking at some of the pictures from my childhood, I’m not surprised. Little gay boys have a way about them, and I had that way. From what I gather from other queer people, this is how it is for most of us.

But sometimes I wonder why we are so insistent. What is it that gives weight to the question of whether or not being queer is a choice?

For one thing, as Mr. Peretz has exemplified, it is a matter of survival. When being queer is perceived as a choice, there are those who forcefully insist queer people make another choice.

But we are playing a dangerous game when we even concede to having this argument. If the only thing separating the (dangerous, deadly) Conversion Therapy approach from the (more palatable, less deadly) Compassion Approach is the answer to the question, “Can sexuality be changed?” then we have a problem.

Because sexuality can be changed. We know this. Here are some examples:

People live in the closet while being married to opposite-sex partners.

We should rather insist that being queer is a good thing. It’s not a sin. Not a crime. Not a disease. It is inherently legitimate, whether chosen or not. This must be our starting point.

Its failures are common and unconscionable. Its successes are not only rare, but utterly meaningless. It is the amputation of a healthy limb. It is an attempt to fix what is not broken.

When given the chance to live free lives, and to shake free of the harmful stigmas that the world has put upon us, queer people love being queer. We have no gun to our heads.

We were born this way, yes, but many of us would choose being queer over and over again if we only could.

Matthew Schultz is a writer based in Tel Aviv. His first collection of essays, What Came Before, is forthcoming with Tupelo Press. His work has also appeared in Best American Nonrequired Reading, Ecotone, Haaretz, Tablet and elsewhere. Follow him on Instagram