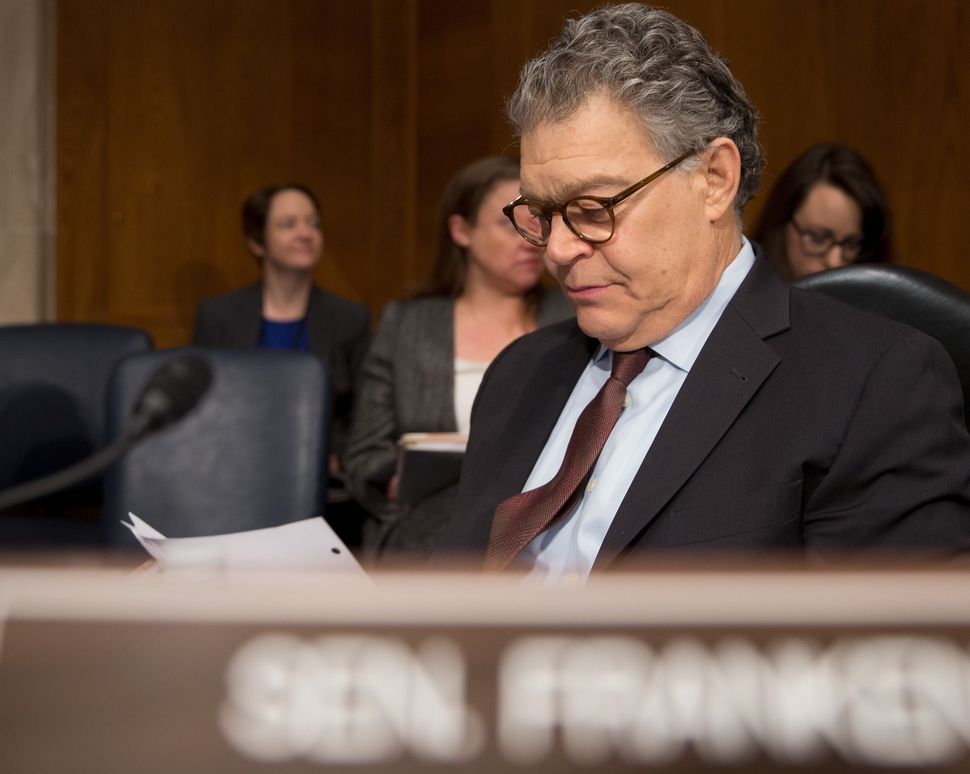 In the latest #MeToo news, veteran New Yorker reporter Jane Mayer has published a lengthy investigative story that appears to vindicate Al Franken, the former Democratic Senator from Minnesota who resigned in 2017 under a barrage of sexual misconduct charges. Mayer’s conservative critics have accused her of partisan bias, especially in view of her (they say) unskeptical coverage of charges against Supreme Court Justice Brett Kavanaugh. They have a good point. But partisan though it may be, Mayer’s piece is a step in the right direction—that of tempering the #MeToo movement’s laudable concern with sexual violence and abuse of power with a genuine commitment to a presumption of innocence and a more realistic view of sexual dynamics.

Back in 2017 when the Franken scandal played out, some of us—including some who, like my own libertarian/center-right self, did not particularly care for most of the Senator’s politics—said all along that he was the victim of a witch-hunt. Granted, the notorious 2006 photo in which Franken (then a comedian) reached toward a sleeping woman’s breasts in a mock intent to grope while grinning at the camera was not a good look. But the details that quickly emerged added some strong exculpatory context.

The photo was taken aboard a plane when Franken and his accuser, newswoman and former entertainer Leeann Tweeden, had just completed a USO tour filled with mutual bawdy hijinks; it seemed clear that for him, it was a funny postscript to that adventure. Needless to say, such intent would not excuse an actual sexual assault. But the photo did not, as some claimed, show Franken groping Tweeden; his hands were well away from her chest, and she was wearing a flak jacket.

Tweeden claimed that on the tour, Franken had deliberately scripted a skit that included a kiss between them, gave her a wet kiss during rehearsal, and turned nasty when rebuffed; the mock-grope photo on the flight home, she said, was one last insult. Some commentators such as radio host John Ziegler—definitely no Franken fan—cautioned at the time that Tweeden’s allegations had never been properly vetted and that there were major problems with her story. For one, Franken had previously done the same skit with other female partners—and its whole premise was a nerdy male officer writing an audition script just to get a sexy woman to kiss him.

Mayer also points out the lack of vetting and the holes in the story but adds a jaw-dropping new detail. It turns out the skit ended with a coda in which Franken, playing a doctor, offers Tweeden a “complete breast examination,” comes at her with outstretched arms aiming for a grope, and gets deftly rebuked. So, the offending picture was literally Franken reenacting part of the skit. (Also, while Tweeden claimed the mock-grope photo was specially added by Franken to her CD with tour photos as a personal taunt, other tour members said it was on their CDs as well.) One may say that, regardless, it was wrong for Franken to play a coarse joke on Tweeden offstage without her consent. But it seems like an offense that would call for an apology, not career destruction. Yet Tweeden never asked for an apology. Mayer notes that three years later, she attended a USO event honoring Franken in Washington, DC and was photographed laughing with him. Ziegler also points to a 2011 tweet in which she shared a photo of herself and Franken at the 2006 USO tour with a friendly comment. Does this prove she did not feel wronged? Maybe not; but unlike Harvey Weinstein accusers who remained on friendly terms with him, Tweeden did not have to stay in Franken’s good graces for career survival.

One’s perspective on this incident depends to a very large extent, I think, of one’s more general view of sexual dynamics in our culture. Are women who take part in risqué flirtation and ribald humor, whether as professional entertainers or as consenting adults in social situations, truly willing participants—or victims of patriarchy who have no choice but to cater to the sexual wishes and fantasies of dominant males? To see women as powerless in sexual interactions with men is much too simplistic even when we’re talking about far more male-dominated times such as the 1950s. After more than half a century of women’s liberation, such a framing amounts to an insulting denial of female agency—not to mention a bizarrely Victorian assumption that a natural, freely chosen female state would be a chaste and modest one.

Franken would likely have survived Tweeden’s charge if it had not been for additional allegations from seven other women. Usually, multiple accusations are compelling; but in this case, as both Ziegler and I argued in 2017, and as Mayer demonstrates in her piece, they leave plenty of room for doubt.

Three women, two of them anonymous, claimed Franken touched them on the rear during photo ops—of which he must have done thousands. (Franken claimed accidental hand slippage; for what it’s worth, Canadian TV personality and photo-op veteran Liana Kerzner told me back in 2017 that it’s not nearly as ridiculous as it sounds.) An Army veteran said he cupped her breast during a USO tour photo op in 2003; the photo shows her smiling while he hugs her. A local officeholder claimed he tried to give her a “wet, open-mouthed kiss” while hosting a live radio broadcast from a theater (the kiss landed on her cheek, and numerous people watching noticed nothing amiss). A former congressional aide said Franken moved to kiss her in 2006 after her boss appeared on his radio show and that he told her it was his “right as an entertainer.” Franken tells Mayer he must have meant to hug her good-bye and may have said something like, “That’s what we do in show business.”

The eighth allegation, from New York writer Tina Dupuy, is so preposterous I still find it hard to believe it got published in The Atlantic: Dupuy wrote that Franken “groped” her by squeezing her waist during a photo op in a way she considered inappropriate, partly because she felt self-conscious about her weight gain. Mayer points out that minutes later, Dupuy posted the photo online with the comment, “Totally stoked.”

Mayer’s piece makes a compelling case that Franken’s alleged “sexual misconduct” amounts to an ill-advised crude joke after a comedy tour and several awkward physical interactions in the course of social hugs and kisses. But there are some caveats. As conservative writer Andrew Egger commented on Twitter, Mayer’s story repeatedly suggests that Tweeden, a right-wing Republican, was out to get Franken for political reasons—as Egger says, “a notion that was verboten when it was Kavanaugh under the gun.”

What’s more, Meyer’s meticulous parsing of the charges against Franken is in stark contrast to her (and Ronan Farrow’s) rush to report the claim by Kavanaugh’s former Yale schoolmate Deborah Ramirez that he exposed himself to her during a drunken party. Ramirez admitted that her recollection was very fuzzy and that it was only after six days of “carefully assessing her memories”—in the midst of the sexual assault accusations against Kavanaugh by Christine Blasey Ford—that she finally decided he was the culprit. In a follow-up, Mayer and Farrow extensively quoted another Yale alum who told them he was “one-hundred-per-cent certain” he had heard about Kavanaugh’s indecent exposure to Ramirez from a classmate who had witnessed it himself. Buried inside the piece was a single line acknowledging that when The New Yorker reached that classmate, “he said that he had no memory of the incident.”

Whatever one thinks of Brett Kavanaugh, it’s not hard to conclude that Mayer is guilty of partisan double standards.

Nonetheless, Mayer’s new story on Franken makes some important points that I think are essential if we are to have a fair and reasonable conversation about #MeToo issues. Namely:

If Mayer’s story can bring this message home to a progressive audience, more power to her. As for Franken, Mayer reports that getting #MeToo’ed has “led him to spend time thinking about such matters as due process [and] proportionality of punishment.” There is definitely some irony here, considering that a few months before his downfall, Franken was among the Democratic senators opposing attempts to reform federal guidelines on campus sexual assault to give more protections to the accused. With his newfound wisdom, I wouldn’t mind seeing him run for office again.