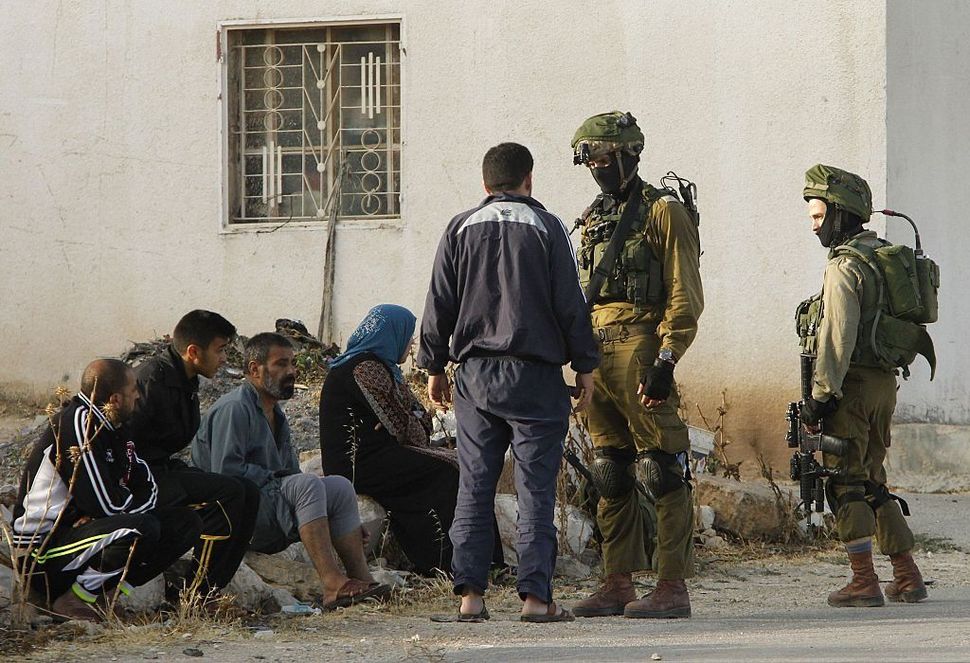 One could read thousands of books and articles about the Israeli-Palestinian conflict and still be stunned by a first glimpse of the separation barrier. Before J Street U’s “Let Our People Know” trip, most of us were familiar with data and statistics about the conflict and the Occupation. Yet, we confess that we were utterly unprepared to bear witness firsthand to the hardships faced by both Palestinians and Israelis on a daily basis.

The trip was structured to both provide a nuanced understanding of the Israeli-Palestinian conflict, including the Israeli occupation of Palestinian Territories, and help us examine our own Jewish identities and connection to Israel. Through interacting with a variety of places and people, from Israelis in kibbutzim and Jerusalem, to Palestinians in Ramallah and Susya, otherwise distant narratives became painfully authentic and deeply personal. The volatile debates on our college campuses suddenly seemed trivial and distant.

“Let Our People Know” is lamentably unique; most young Jews who visit Israel on organized trips are not given a comprehensive education about the geopolitical history of the region, let alone able to meet Palestinians living under occupation. For the vast majority of us, this trip was the first opportunity to hear from those who live the day-to-day reality of the Israeli-Palestinian conflict.

One particularly impactful conversation came during our visit to the Palestinian village of Susya, located 60 km south of Jerusalem, and well over the Green Line. There, the community leader, Nasser Nawajah, gave us a glimpse of what living under the Occupation truly means.

For the villagers of Susya, Occupation means having their land seized from under them and not being allowed to return. Occupation means being detained when they need water, and bearing exorbitant sentences from Israeli judges in an Israeli judicial system. Occupation means their thirsty children cannot finish high school, and are forced to leave education behind in order to help support the family. Occupation means facing a system designed to dehumanize and destroy them, and struggling to survive in spite of that. Mr. Nawajah’s life and experiences are painful and heart-wrenching, and no statistic could capture what he expressed.

We also visited Netiv HaAsara, a small moshav bordering the Gaza strip. There, we heard firsthand from Israeli resident Hila Fenlon how hard it is to live in a place where your life and the lives of your loved ones are under constant threat.

Hila moved to the moshav from the Sinai willingly because, as she put it, “peace is a good reason to give up your home.” Her new home is anything but peaceful. Hamas began firing rockets over the Gaza border in 2001, and has not stopped since. Today, residents are never more than 3-4 seconds from a bomb shelter. They live in fear, never knowing how many bombs, mortars, and rockets today will bring.

These genuine and personal narratives brought about immense feelings of frustration and despair for many of us. We were faced with accounts of human suffering that were attributable to the state many of us were taught to love, praise, and cherish since birth. Yet as the trip continued, we began to more fully process these visceral reactions and transform them into a measured response.

One of the catalysts in this transformation came in the form of Israeli activists. Hagit Ofran from Peace Now and Yael Patir from J Street in Israel guided most of our time in the West Bank, and provided nuanced Israeli perspectives on controversial issues. Their guidance extended beyond the facts, as they exemplified how one could translate frustration and despair, after viewing blatant injustice, into positive practical action.

Hagit and Yael are not alone in this effort — countless other Israelis and Palestinians, who’ve also recognized the pain caused by the system, feel inspired to transform it.

After hearing the stories of those on the ground, we feel more connected to Israel, Palestine, and the people who live there than we ever did before. This trip helped to humanize the politics of the Israeli-Palestinian conflict, reminding us all that we are collectively trying to eliminate the oppression of people rather than debate abstract political entities. It brought life and meaning to the statistics we often throw around. And in doing so, it furthered our connection to and investment in the land and its people.

Returning to the U.S., this strengthened connection has inspired us to take action. While we heard many different perspectives, most people agreed on one thing: major change is possible.

As one Israeli non-profit organizer, Maayan Dak, put it: “If [the Palestinians] don’t give up on us, then how can I?”

We also refuse to give up. To catalyze a just end to the Occupation, we are starting conversations within our Jewish communities, pressuring our politicians to speak out against injustice, and organizing, leading, and educating on our college campuses.

No numbers, data, statistics or rhetoric will ever do justice to an individual’s experience. Deuteronomy 22:3 commands “you must not remain indifferent” in the returning of lost objects, but the words transcend the page — compelling us to not be complicit in the injustice done to others.

Through our meetings with Israeli and Palestinian community leaders and activists on “Let Our People Know”, we gained insight into how this injustice impacts lives, lives that are often callously thrown around in detached, ideological rhetoric.

Ultimately, “Let Our People Know” demonstrated the power of experiential knowledge in catalyzing change; we feel both more connected to Israel-Palestine and more motivated to help transform it than ever.