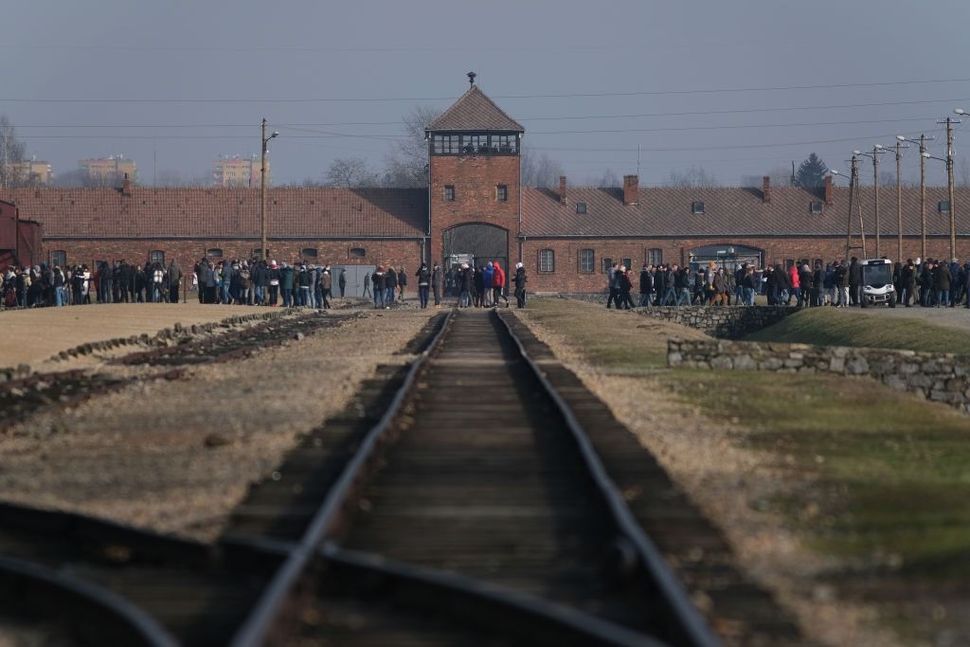 OSWIECIM, POLAND - FEBRUARY 15: Visitors walk past the entrance gate and original railway tracks, where arriving Jews were sorted between slave labor and the gas chambers, at the Auschwitz II-Birkenau memorial concentration camp site on February 15, 2019 in Oswiecim, Poland. Next year, 2020, will mark the 75th anniversary of the liberation of Auschwitz. The Nazis used the Auschwitz camp and its satellite camps for slave labor and large-scale extermination of arriving inmates. In all 1.1 million Jews and others died at Auschwitz between 1940 and 1945. (Photo by Sean Gallup/Getty Images) Image by Getty Images

When Rep. Alexandria Ocasio-Cortez referred to detention centers for asylum seekers in the U.S. as “concentration camps”, a controversy rightfully erupted. Some decried AOC for trivializing the Holocaust; others defended her statement as a legitimate image to draw attention to suffering and inhumanity. Others argued the fine points of terminology (she said “concentration camps,” not “extermination camps”).

Fundamentally, though, both sides of that controversy embodied and demonstrated a major Jewish victory: the stunning success, at least as measured by awareness, of Holocaust education. The question remains whether that victory was a pyrrhic one.

For decades, the Jewish community has been educating the world about the horrors of the Holocaust. Museums were built, best-selling books were written, and powerful movies were produced. In most of the Western world, the Holocaust is part of school curricula and Holocaust Remembrance Day is marked in most countries. And that exercise in historical memory was, in fact, incredibly successful.

Yes, there’s still Holocaust denial and obfuscation, but it would be almost impossible to find anybody in the Western world who doesn’t know what “concentration camps” are. Most human beings on the planet have a visceral, instinctive reaction when seeing a Nazi symbol — and that’s good.

But here’s the paradox: By highlighting the Shoah as the ultimate example of evil — which it was — we made it into the yardstick by which all evil is to be measured. We can’t be surprised, then, that when anybody wants to call something “evil” they will measure it by that yardstick.

Furthermore, in order to convince the world to learn about and remember the Shoah, we Jews have been the first to remind people of the Holocaust’s universal human relevance: what hate can do; what dictatorship can do; what majority populations have the capacity to ignore; what supposedly civilized societies can find it in themselves to do.

Jews have been willing and eager to discuss the universal relevance of the Holocaust when the question is whether the broader world should remember it. We have made that case successfully, so can we now be surprised that people use Holocaust analogies to refer to issues unrelated to Jews?

Neither should we be surprised when people use the Holocaust to talk about problems that don’t rise to the same level of evil. Analogies aren’t always about proportion; they can be about feelings or flavors.

The murder of Daniel Pearl evoked associations to the Holocaust in a way that the death of dozens in a car bomb in Afghanistan won’t. The lynching of a black person by a white mob is a hate crime and therefore “feels” more similar to Nazi violence than a murder in a botched robbery. The “magnitude” of the crime has little to do with the associations it evokes.

So it’s easy to see the appeal and the rhetorical usefulness of Holocaust analogies. In fact, they are almost inescapable. We have given the world a language for speaking about evil, and they are using it.

Of course, it didn’t start with AOC. As Chemi Shalev duly notes, “Before Ocasio-Cortez was portrayed as having ‘desecrated the Holocaust’ by using the term ‘concentration camps’, it was the lingua franca outside of Israel as well. Bill Clinton described Serbian holding pens for Muslim Bosnians as ‘concentration camps’, the same term used by Republican Senator Marco Rubio last year in order to blast China. In 2017, Pope Francis said that the overcrowding in camps for refugees is reminiscent of ‘concentration camps’.”

On the political right, anti-abortion activists routinely refer to abortions as a “Holocaust of the unborn” and gun rights activists have used the Holocaust as an excuse to advocate liberalizing gun laws even further. President Trump, who of course jumped to attack AOC, has himself compared American intelligence agencies to those of the Third Reich.

But the left has long participated too. Rep. Keith Ellison and George Soros are among the left-wing figures who invoked Nazism in reference to George W. Bush.

In a 2018 video for PETA, Natalie Portman quoted Isaac Bashevis Singer in comparing all meat-eating humans to Nazis. And of course, countless BDS-niks and other anti-Zionists have been saying or implying for many decades the hideous slander that Israel is a Nazi state.

So this conundrum is not new. But it’s still a conundrum. On one hand, we have a moral imperative to keep the memory of the Holocaust front and center for all people. On the other hand, we want to preserve the Jewish particularity of its memory, and ensure that people remember the true severity of the event instead of treating it as a generic symbol for any level of evil.

These goals are in no small tension. We want the world to own the memory of the Holocaust, but once they own it, how can we control how they use it?

Maybe that quandary has no solution, but if it has one, it starts with us Jews. Knowing how the memory of the Holocaust is distorted and misused, we have a particular duty to use Holocaust analogies sparingly and responsibly. We have a long and ugly tradition of using and abusing the Holocaust in our political and social discourse.

Just a couple of weeks ago, Israeli Education Minister Rafi Peretz called intermarriage “a second Holocaust”, and Israeli Prime Minister Benjamin Netanyahu routinely calls Iran and other enemies of the State of Israel Nazis, accusing them of wanting to perpetrate another Holocaust.

The abuse of Holocaust imagery is not new for Netanyahu, nor restricted to Israel’s enemies; at the beginning of his career, in 1995, he presided over a rally in Jerusalem’s Zion Square in which then-PM Yitzhak Rabin was depicted wearing an SS uniform.

And the American Ambassador to Israel, David Friedman, referred to J Street as “worse than kapos”.

Referring to other Jews as “Nazis” is not confined to the Jewish Right. Philosopher Yeshayahu Leibowitz called the occupation of the West Bank and Gaza a “Judeo-Nazi” enterprise, a charge echoed by many other left-wing Jews.

And in a 2016 Yom HaShoah speech,, Maj. General Yair Golan said that he saw trends from the run-up to the Holocaust happening among Jews in Israel today. Many Jewish leaders, on both the left and the right, compare the situation today in Europe to that of the 1930s, a nonsensical comparison which has become commonplace.

The irony is that the use of those comparisons is not only wrong, but also self-defeating. People know that even with growing pockets of anti-Semitism, the Europe of today is not really like the 1930s — not even close. The more we cry wolf, the more the legitimate parts of our message are disregarded.

And, naturally, every time we call the Palestinians Nazis, we are inviting the world to use the same imagery against us. It’s not that Israel’s enemies need any encouragement to call Jews Nazis, but we certainly don’t help bolster the norm against trivial Holocaust analogies by using Holocaust imagery to refer to an enemy that, even when vicious and destructive, has little in common with the Third Reich.

For the Jewish people, the main difference between our times and the Nazi era is not any difference in desire of others to destroy us, but the utter defenselessness of the Jews at the time. Today Jews still have enemies with genocidal designs, but also a sovereign state and, thank God, the 8th strongest army in the world, and enough atomic weapons to take the entire Middle East back to the Stone Age.

How can we demand respect for the victims when we are the first to misuse their memory? How can we insist on centering the Jewish story in Holocaust memory when we use the Holocaust to vilify and demonize other Jews?

So if we want to stop the use and abuse of the Holocaust for political purposes, let’s start doing so ourselves. Let’s declare a moratorium on Holocaust imagery and a suspension of Holocaust comparisons (especially to refer to fellow Jews). Let’s use the Holocaust analogy only in situations where Jews are facing genocide in a state of utter and total defenselessness (in other words, let’s save them for a planet in which there’s no Jewish State). Or, if considering the analogy in a non-Jewish context, let’s save Holocaust imagery for scenarios in which some other people faces actual genocide with no homeland to defend them.

Of course, that standard is very different from “not talking about the Holocaust.” We should continue, more than ever, with our efforts to preserve the memory and uphold the historical veracity of the Shoah—precisely to make sure that people know the difference between current political situations and the worst crime in humanity’s history. Education and memory, yes; distortion and misuse, no. In these times of quick sound bites and exaggerated tweets designed to provoke easy outrage, it’s critical for people to be reminded of what made the Holocaust so uniquely vicious.

We can expect the memory of the Holocaust to be misused further. It’s too much of a tempting shortcut to people’s emotions, a cheap way to get immediate attention. But not trivializing the Holocaust begins at home. Until Jews take that responsibility, our moral right to criticize the cynical use of the Holocaust by others is hypocritical. Either nobody banalizes the Holocaust, or we all do.

Andrés Spokoiny is President and CEO of Jewish Funders Network.