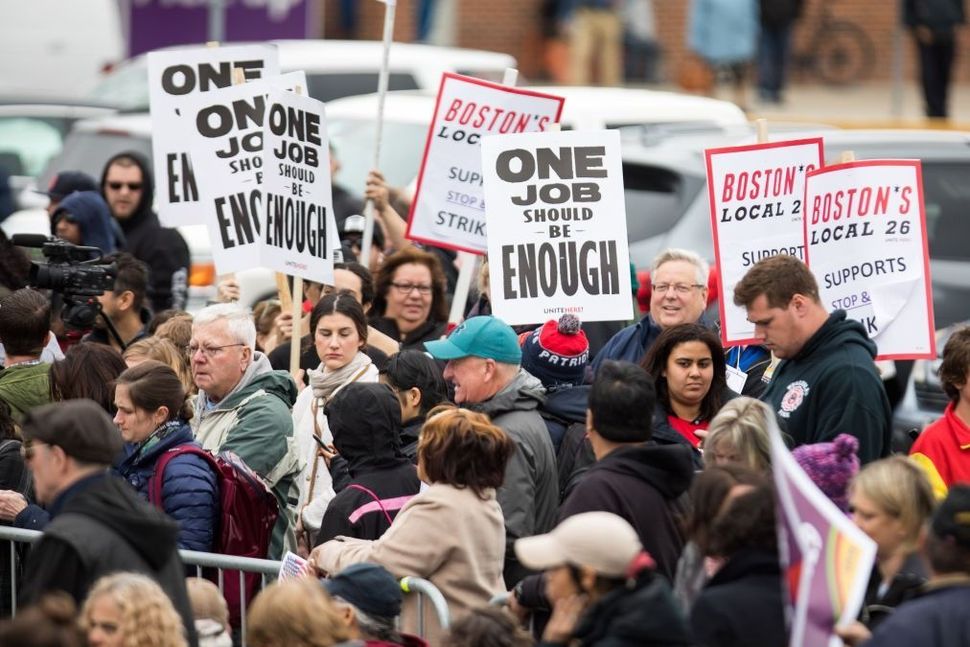 The fight for working people — for labor and against income inequality — is picking up steam.

Workers’ voices are being heard. Organized labor unions in the transportation sector are standing up. Teachers unions are being revitalized. Non-traditional walkouts at places like Google or Wayfair are increasingly common. Both the right and the left have strong populist movements and feel the need to appeal to working class voters.

If you keep your eyes open, the trend is clear. Now is the time for a revitalized labor movement — and Jews have to be a part of it. If Jews are to be true to their values, history, and law, then we must support labor rights for all.

To be true to ourselves, we have to remember where we came from. We must remember our Jewish history. In the mid-19th century, when many Jews started to arrive in the United States, most were workers. From the very beginning of the labor movement in America, Jews have played a pivotal role, be they in the garment industry, or in professions like cigar makers, bakers, printers, painters, or actors, or in labor leadership such as Samuel Gompers, a Jewish founder of the American Federation of Labor. The Forward was originally founded as a Yiddish-language daily socialist newspaper, and newspapers like these were critical to building the class consciousness of the Jewish people. The roots of the American-Jewish experience is tied to the fight for a better life—the fight for labor rights.

Still, it’s not just a matter of the values of Tikkun Olam and social justice. It’s also a matter of Jewish law. Halacha, Jewish law, has many clear instances of siding with workers, from the right to prompt payment, to the right to stopping work at any time, limiting hours of work and giving the benefit of the doubt to workers in disputes over wages, to setting aside part of the fields for the hungry and the stranger. More specifically we are commanded, “You shall not oppress a hired servant who is poor and needy, whether he be of your brothers, or of foreigners who are in your land within your gates.” (Deuteronomy 24:14).

But what about modern Jews who do not follow Halacha, who might not be familiar with the history of the Jews in the labor movement, and who may care about social justice, but don’t gravitate towards doing that work through a Jewish lens? I would argue that for all Jews there is an imperative to take the fight for working people and against income inequality seriously.

Jews must understand this moment. It is no coincidence that as income inequality has risen, so too has the number of hate crimes committed against minorities, including Jews.

It is during times of economic turmoil and anxiety when people start looking for others to blame for their lot in life. Research shows that places with higher income inequality have a tendency to also have higher rates of hate crimes and hate incidents. One way anti-Semitism operates is by redirecting economic frustrations and blaming Jews, re-creating the age old fantasy that Jews “secretly” control the economy.

Jews have to care about making an economy that works for everyone because that’s the only way Jews can not only be economically secure, but secure in our lives as well.

There are ways to re-engage with the fight for working families. Support your local unions. Join your chapter of the Jewish Labor Committee. Make sure your synagogue’s social action committee includes economic justice as part of their mission. But ultimately, whatever way you get involved, it’s time, this Labor Day, for the Jewish community to renew its ties to the labor movement.

Ari Fertig is the Executive Director of the New England Jewish Labor Committee.