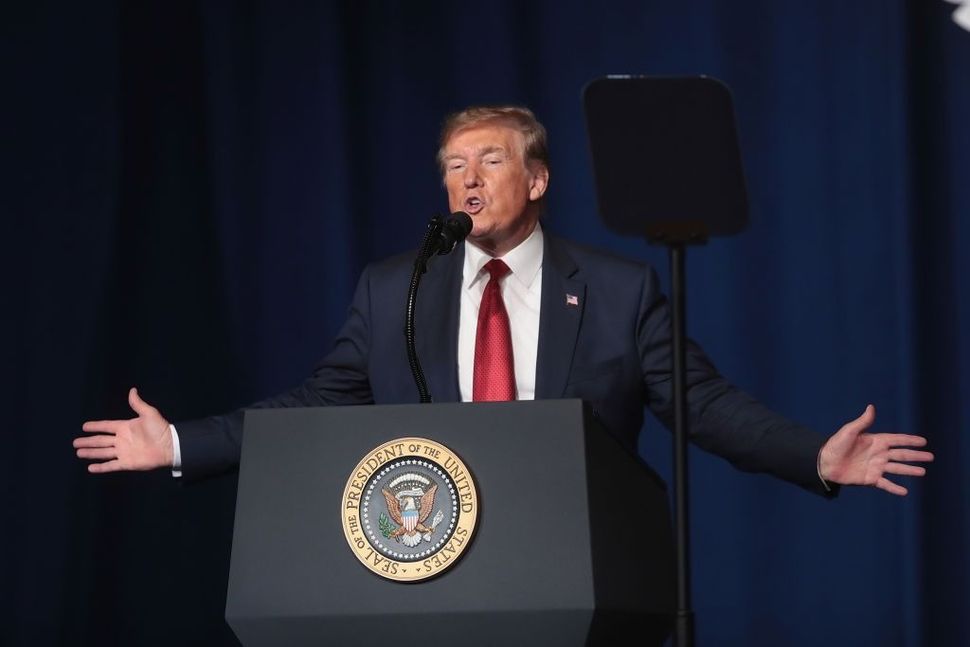 President Trump’s chutzpah in instructing American Jews on how to vote is appalling on multiple levels.

He violates the Founders’ instruction that the first rule of American democracy is to seek the common good, not to advance your clan, or family, or race, or religion at the expense of everyone else. Trump may view American democracy as a war of all against all, but, thank goodness, George Washington and Abraham Lincoln knew better. American Jews have been among the greatest beneficiaries and the most enthusiastic proponents of that ideal. As a small, often despised minority, we’ve benefited by the search for the common good because, in this country, it has enabled us to transcend the swamp of tribal prejudice that has too often doomed us to tragedy elsewhere.

Furthermore, when did Donald Trump become the guy who knows what’s good for the Jews? Is it his long history of empathy with the downtrodden? Is it his superior wisdom about building stable and enduring institutions that don’t go into bankruptcy? Is it his superior understanding of geopolitical dynamics that leads him to urge Russia’s readmission to the G-7, or makes him friends with every thug who runs a country by force, but pushes him to quarrel with every leader of a democratic nation?

Actually, Trump has no idea what’s good for the Jews. But he knows what’s good for Donald Trump. If splitting American Jewry into warring factions advances Trump’s short-term political interests, then he’ll do just that, while telling American Jews that joining his war of all against all is best for them. Watch how quickly our new friend, Donald, dumps us when making pro-Israel noises isn’t in his interest any more. Wait for the wink and the nod to “the very fine people” who marched at Charlottesville.

Finally, his advice about what’s good for Jews is just terrible. Not merely because he urges us to throw away the essence of what it has meant to be Jewish — concern for the stranger; respect and toleration for others; love for the entire Jewish community; and pursuit of individual excellence to advance the common good — but because Trump’s way, the way of tribalism and intolerance; disrespect and oppression; and the glorification of might over right, will mean the end of Israel. Just as individual Jews do not thrive in a climate of tribalism and intolerance, a Jewish state cannot endure forever as a fortress that uses its power to crush the aspirations of others.

The only enduring path forward is the path of peace and mutual respect.

Of course Israel must be protected. History teaches that there must always be a secure haven for the Jewish people. But there is no unbridgeable chasm between Israeli security and living in mutual respect with Palestinian neighbors.

Mr. President: I’m an American Jew. I’m informed. And I’m loyal, both to my beloved United States and my Jewish heritage.

And you are a scoundrel who would drive a wedge into the Jewish community just to help your re-election prospects. I’d say “have you no shame,” but, of course, you have none.

Burt Neuborne is the Norman Dorsen Professor of Civil Liberties and founding Legal Director of the Brennan Center for Justice at NYU Law School.