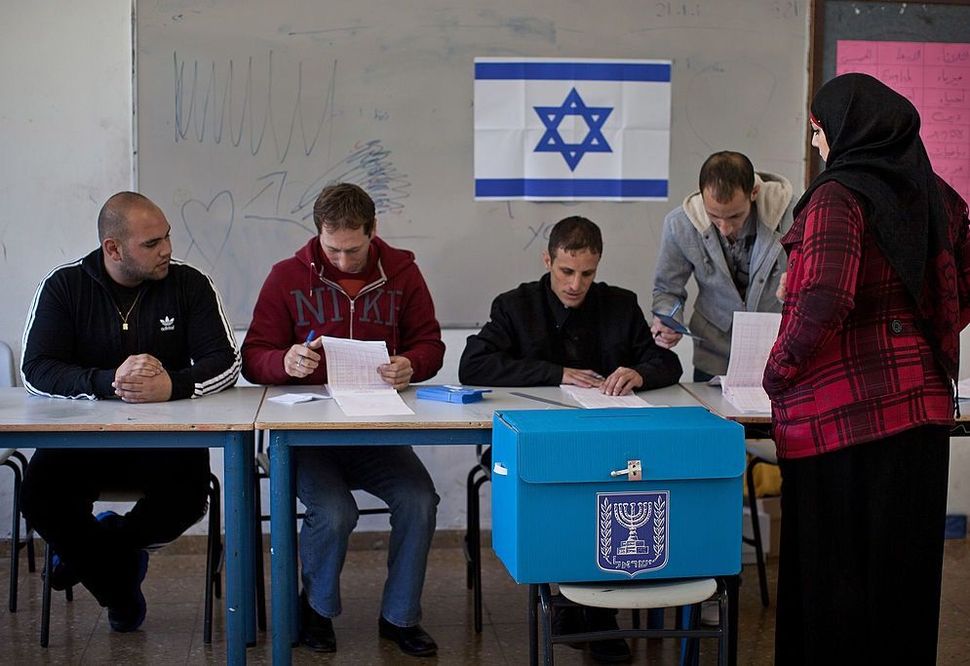 Jewish and Arab-Israelis at the polls Image by Getty Images

The tempest over Israel’s travel ban on two congresswomen and the year-long roller coaster of back-to-back elections has unleashed an avalanche of misplaced condemnations and hand-wringing about the health of the country’s democracy. Yet democratic life in Israel remains remarkably strong and resilient.

For starters, democratic and liberal norms continue to predominate. Voter turnout, contestation, a free press, and other indicators of democratic life and the rule of law are high. Israel’s electoral committee, a key institution, enjoys wide public legitimacy. Moreover, the committee was recently chaired by Salim Joubran, a judge from the Arab sector, reflecting further progress the country has made in overcoming some of its deep-rooted internal cleavages.

It’s not just voting, either. Pay attention to the post-election concession speeches, and opposition politics more broadly, as these are also critical barometers of democratic health and Israel has traditionally performed well in these areas.

Furthermore, political reform is strengthening Israel’s democratic institutions. The best example is the country’s steadily rising electoral threshold, now at 3.25%. The rising threshold is curbing factionalism and ultra-fringe politics and encouraging blocs and party consolidation — outcomes you can see across the spectrum in the current election. Still, 3.25% is low by global standards, and a further rise to four or five percent would go even further towards stabilizing the Israeli political system and promoting parties with broader and more moderate appeals.

That said, don’t expect Israelis to go much higher, or abandon their proportional voting system altogether, given the high value Zionism has always placed on pluralism and given the Jewish people’s long and bitter experience with political marginalization. Once the current prime minister leaves office, whenever that may be, do not be surprised if the Israeli political system takes a hard look at term limits, as Americans did after FDR’s presidency.

It is also the case that Israel’s national security community remains a reliable and staunch bulwark of democratic life and the rule of law. Lieutenant General Gadi Eizenkot, the recently retired military chief of staff, is a good example of this dynamic, particularly in his handling of Elor Azaria, a soldier convicted and jailed for killing a subdued Palestinian attacker.

Another example is the widespread criticism by national security figures of proposals to limit judicial oversight, and of the Nation-State law, widely viewed as challenging Israel’s long tradition of equality for all citizens.

Then there’s the fact that world Jewry is also a growing source of support for Israeli democracy. Beyond serving as a lifeline of financial support for leading non-governmental organizations that seek to strengthen democratic life, like the widely-regarded Israel Democracy Institute, Jewish communities themselves are increasingly concentrated in the world’s strongest democracies, including the U.S., Canada, France, the U.K., and Australia. With the exodus of Soviet Jewry following the end of the Cold War, almost the entirety of the Jewish world — 95% — is now located in democratic countries and steeped in democratic values.

Although the abiding commitment to Israel by world Jewry is multi-sourced, the state’s democratic foundations are of central importance. Earlier this year a leading diaspora advocacy organization, the American Jewish Committee, spoke out publicly against the participation of the ultra-right Otzma Yehudit (“Jewish Power”) Party, a censure quickly endorsed by the American Israel Public Affairs Committee (AIPAC). “Reprehensible” is how AJC characterized the party’s views, and the group’s Israel director took to the airwaves to deliver that message in Hebrew. Both groups opposed the travel ban on the congresswomen, but it is their earlier intervention into Israeli electoral and internal politics that is more profound.

“The views of Otzma Yehudit are reprehensible. They do not reflect the core values that are the very foundation of the State of Israel.” Read our full statement: https://t.co/S1uC9Vv0rR pic.twitter.com/Ae5goQkj4x

These types of interventions were largely taboo in earlier eras, when the Jewish diaspora was still spread between East and West, when the number one priority was Jewish security, and when American Jewry primarily viewed its role as supporting Israeli welfare and galvanizing outside advocacy.

More broadly, world Jewry is now well placed to challenge the rising tide of illiberalism globally, which would also further protect democratic life in the one and only Jewish state.

Granted, there are illiberal dynamics afoot in Israel, most notably calls to undermine judicial independence and a climate in which many non-governmental organizations and segments of civil society sometimes feel besieged.

The Palestinian question is probably Israel’s toughest challenge, and the one most likely to threaten democratic ideals over the long haul. A seemingly unending occupation, complicated by on-going Jewish settlement expansion, has left Israel with a variety of democratic deficits, including parallel standards of law. Moreover, there remain pockets of Jewish settlers who continue to challenge state institutions, often acting outside the law.

But Israelis themselves are not naïve. They harbor their own critical self-assessments, as the pollster Tamar Hermann and her colleagues have documented, anxieties that are especially pronounced among secular Israelis.

Still, context also matters, and against the backdrop of deep social cleavages and relentless external threats and security challenges, Israel’s democratic balance sheet appears brighter and more positive than many outside observers will acknowledge.

The drama of Israel’s current electoral double-header and the stir caused by the travel ban should not obscure the big picture of a society that is free and open and still the only stable democracy in a region where liberty remains largely and dangerously absent.

Scott Lasensky is a visiting professor of Israel Studies and Jewish Studies at the University of Maryland. From 2011-2017, he was a senior advisor on Israel, the Middle East and Jewish affairs in the Obama Administration.