This Is How Israeli Democracy Ends 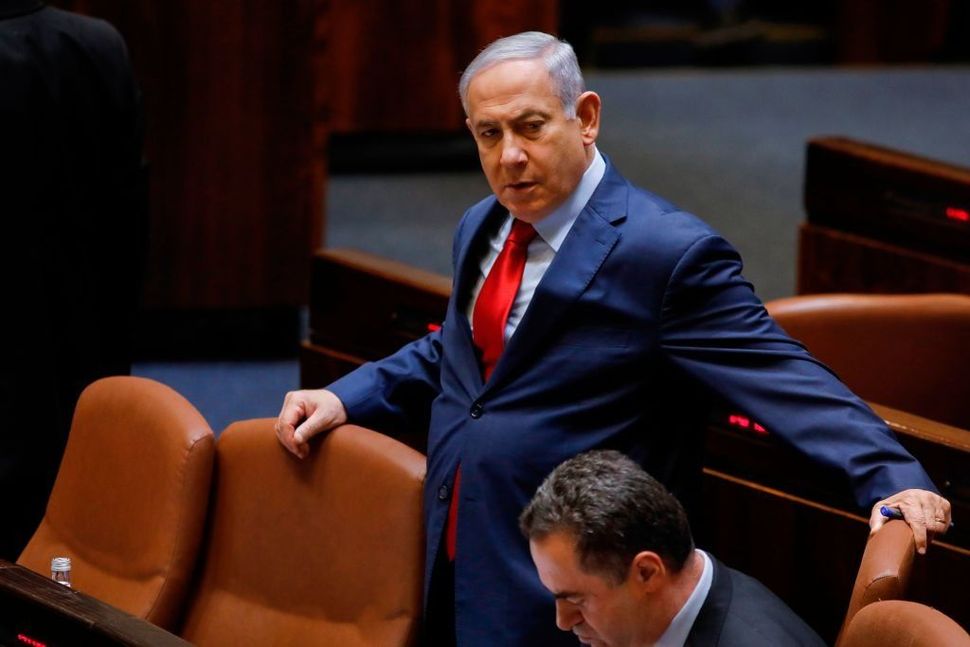 Israeli Prime Minister Benjamin Netanyahu stands before a vote on a bill to dissolve the Knesset (Israeli parliament) on May 29, 2019, at the Knesset in Jerusalem. (Photo by MENAHEM KAHANA / AFP) / The erroneous mention[s] appearing in the metadata of this photo by MENAHEM KAHANA has been modified in AFP systems in the following manner: [before a vote on a bill to dissolve the Knesset] instead of [during a party meeting]. Please immediately remove the erroneous mention[s] from all your online services and delete it (them) from your servers. If you have been authorized by AFP to distribute it (them) to third parties, please ensure that the same actions are carried out by them. Failure to promptly comply with these instructions will entail liability on your part for any continued or post notification usage. Therefore we thank you very much for all your attention and prompt action. We are sorry for the inconvenience this notification may cause and remain at your disposal for any further information you may require. (Photo credit should read MENAHEM KAHANA/AFP/Getty Images) Image by Getty Images

This morning, it was reported that Israel would be denying entry to two U.S. Congresswomen, Ilhan Omar and Rashida Tlaib, who sought to visit the West Bank and East Jerusalem. But Israel’s decision to block Representatives Tlaib and Omar, though shocking, is no surprise. Rather, it is part of a trend just as alarming as it is persistent for a country long hailed as “the sole democracy in the Middle East.”

Three years ago, Israel passed the so-called “NGO Law,” a piece of legislation that asked human rights organizations to declare whether they receive the majority of their funding from foreign sources. The effect was to stigmatize pro-peace and left-leaning groups like B’Tselem and Breaking the Silence, sending the signal that their support doesn’t come organically from within the country.

That same year, Public Security Minister Gilad Erdan proposed sanctions against Israelis who actively oppose official government policy toward the Palestinians. It would take a whole lot of spin to label sanctions against dissent as somehow democratic.

Last July, Israel barred Boycott Divestment Sanctions activist Ariel Gold from entering the country. She was told by authorities that among her violations was “telling soldiers in Hebron they weren’t acting with Jewish morals.” Then, in August Simone Zimmerman, an American Jewish activist and founder of IfNotNow, was held at the border and questioned, and prominent writer Peter Beinart was detained at Ben-Gurion airport.

In October Lara Alqasem, an American student of Palestinian descent, was detained at the airport and told she could only enter the country if she renounced her support of the B.D.S. movement.

Today’s news is an escalation of these fear-mongering tactics. To block two sitting U.S. members of Congress from entering the country is a new extreme that ought to set off alarm bells. The decision stems from a recently passed law blocking foreign nationals who support a boycott of Israel from receiving entry visas. Prime Minister Benjamin Netanyahu said that when he received the Congresswomen’s visitation plan, “it became clear that they were planning a campaign whose sole purpose was to strengthen the boycott and negate Israel’s legitimacy.”

The Israeli government’s decision has already been condemned by a number of Israeli diplomats, including Israel’s former ambassador to South Africa and the former consul in New York, who called it “fake policy.”

Even the American Israeli Public Affairs Committee decried Israel’s stance against Representatives Tlaib and Omar, tweeting that “every member of Congress should be able to visit and experience our democratic ally Israel firsthand.”

Someone should tell AIPAC’s leadership that our “democratic ally” isn’t looking so democratic.

American leadership, meanwhile, has maintained its typical cheerleading stance. President Donald Trump tweeted that Representatives Tlaib and Omar “hate Israel & all Jewish people” and applauded Israel’s signal that they wouldn’t be permitted to visit the country.

Representatives Omar and Tlaib are the face of the Democrat Party, and they HATE Israel!

The debacle underscores the need for a far more critical examination of what policies the U.S. government is willing to tolerate in its ally, as Peter Beinart has called for, as well as a more vigorous debate among democratic presidential candidates about ending America’s blank check military aid toward Israel.

So far, Bernie Sanders has been among the only democratic contenders to seriously challenge current unquestioning American support for Israel, recently saying: “The United States gives a whole lot of money to Israel, and I think we can leverage that money to end some of the racism that we have recently seen.”

Last week, an Israeli teenager was stabbed to death in a West Bank settlement. The boy was raised and educated in the heart of occupied territory, yet the book found under his arm when he died was a novel by pro-peace author David Grossman — a year-end gift that he’d been intending to give to his rabbis. And it was recently revealed that he was part of an interfaith dialogue group with Palestinians.

Even Israel’s most staunch supporters of the occupation are open to hearing voices from across the ideological divide. The Israeli government should take a cue from its own citizens.

As America’s long-time Middle East ally escalates its suppressive tactics, it brings to mind an Ernest Hemingway quotation about how the author went bankrupt: “Two ways. Gradually, then suddenly.” So too goes a nation’s slide away from democracy.

This Is How Israeli Democracy Ends