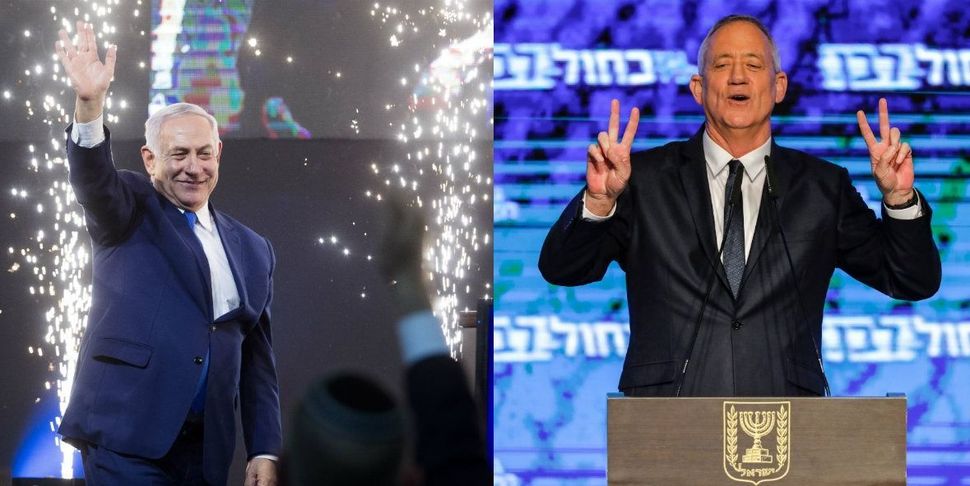 1. Based on initial exit polls, both Benny Gantz and Benjamin Netanyahu can point to historic achievements in Tuesday’s election. Gantz came out of nowhere and within a few short months set up a political party that is now inches away from power. Netanyahu overcame natural fatigue from his decade in power, three criminal indictments, a looming submarine scandal and the wholesale enlistment of his rivals. Although the jury is still out, the exit polls indicate that Netanyahu is within striking distance of a fourth straight term in office, during which he will pass David Ben-Gurion on way to become Israel’s longest ruling prime minister.

2. The overall appraisal of the results is in the eyes of the beholder. Those who view the Israeli public as inherently right wing can view Gantz’s achievements as spectacular. Those who maintain that in any normal country, a prime minister wallowing in a can of worms such as Netanyahu would have crashed and burned in elections will concede that public opinion is, indeed, in the right’s pocket, and could very well stay there forever.

3. Israel’s election procedures have given rise to the cliché “waiting for the seamen’s vote”, which is equivalent more or less to “it ain’t over till it’s over.” With several parties hovering around the 3.25-percent electoral threshold, the final outcome will likely be decided by the 300,000 Israelis who vote in “double envelopes” and whose votes are counted only after Election Day. These include soldiers, diplomats, the few Israeli seamen that still exist as well as those in hospitals and mental institutions. Some people might find it apt that the latter group might decide the outcome of what many describe as the looniest election campaign ever.

4. In its final weeks, the campaign was influenced by differing views on the crucial legal-constitutional question concerning the degree of leeway that President Reuven Rivlin has in picking the politician who will get first crack at forming a new government. Those who swear by the bloc maintain Rivlin must pick the Knesset member who is recommended by most of his peers. Those loyal to the party insist Rivlin must choose the leader of the party that gained the most seats. If the final results indicate that Gantz’s Kahol Lavan gained more seats but Netanyahu has more recommenders, Rivlin could legitimately decide in either direction. Given the tense relations between the two, Rivlin is sure to make Netanyahu sweat before indicating how he’ll proceed.

5. Regrettably, for Gantz, the celebrations in his camp on Tuesday night sparked a sense of déjà vu to the 2009 elections. Tzipi Livni also proclaimed victory with a one-seat advantage of her Kadima over Likud, but by then Netanyahu had already secured enough pledges of support to block her way. Shimon Peres then supplied the precedent that will now be embraced by Netanyahu and Co. as holy writ: Despite his personal preference, Peres skipped over Livni and picked Netanyahu to form the next government.

6. Similarly, within minutes of the publication of exit polls, Netanyahu was working feverishly on extracting vows of support from his natural allies on the right. His first aim is to force Rivlin’s hand. His second would have been to gain leverage in advance of what many observers now see as inevitable – a broad-based government with Gantz. Netanyahu’s supreme goal, however, is averting the long arm of the law, by hook and by crook if necessary. Only a narrow right wing coalition can answer his wishes, and only if he agrees in return to undermine Israeli democracy and scuttle any remaining chances for a peace deal with Palestinians.

7. The very real chance that some parties will fall below the electoral threshold could provide consolation prizes for whichever side winds up in the opposition. The left’s grief is likely to be mitigated if Naftali Bennett and Ayelet Shaked’s Hayamin Hehadash party remains out of the Knesset. The right’s sadness at losing power – if it comes to that – might be moderated by the ejection of the Arab nationalist Balad. Moshe Feiglin’s Zehut party, for its part, spent too much time basking in the popular prediction that it would be the big surprise of the election, to the point that the biggest surprise is that it might not make it into the Knesset at all.

8. Throughout Election Day, leftists fretted about the fate of left-wing Meretz – only to learn that it was Labor who suffered most from Gantz’s successful campaign to attract center-left voters. Despite the party’s stellar Knesset list and the media’s praise for Avi Gabbay’s election campaign, Labor voters deserted in droves to vote for Gantz. They left Labor with the worst showing in its long history, and, potentially, on the verge of extinction.

9. A large chunk of the Israeli Arab community boycotted the polls. They voted no confidence in Israeli democracy, in general, and in their own representatives, in particular. Although there are myriad reasons for their abstention, which many justify, the bottom line is that they may have paved the way for Netanyahu to remain in power. By doing so, they did the bidding of their worst haters: Rather than wait, they ostracized themselves. Their self-exile could have ramifications above and beyond the 2019 election: A minority that feels deprived and discriminated against and also lacks proper political representation could channel its frustrations in ways that would lead to further deterioration and alienation.

10. This should in no way detract from the severity of the crime against Israeli democracy – and criminal code – committed by Likud in trying to smuggle hidden cameras into polling booths in Arab-populated areas. They used an excuse that is familiar to perpetrators of voter suppression in the U.S.: The need to prevent widespread voter fraud, of which there is only scant evidence. Their true aim was to deter Arabs from voting. Judging by results, their crime paid off handsomely.

11. With Labor crushed, Meretz cut to the bare minimum and one of two Arab parties eliminated completely, the so-called Israeli left has been whittled down to minuscule proportions. The messianic right, on the other hand, is thriving, whether or not Bennett makes it past the threshold. Together with like-minded Likudniks, the anti-democratic, anti-Supreme Court, anti-peace and some would say anti-rationality bloc in the Knesset probably comprises about a third of the body’s members. If this were Europe rather than Israel, analogies to the 1930s would flow freely.

12. Finally, a warning to U.S. Democrats: If Netanyahu can win in 2019 – Donald Trump can win in 2020. The combination of nationalism, ethnocentrism, polarization, incitement and tactical genius, it turns out, can easily overcome charges of corruption, contempt for the rule of law and efforts to harm democracy. Former Israeli Prime Minister Ehud Barak used to say that immoral decisions are destined to collapse under their own weight, but he didn’t cite a timetable. The wait, it seems, could be long.