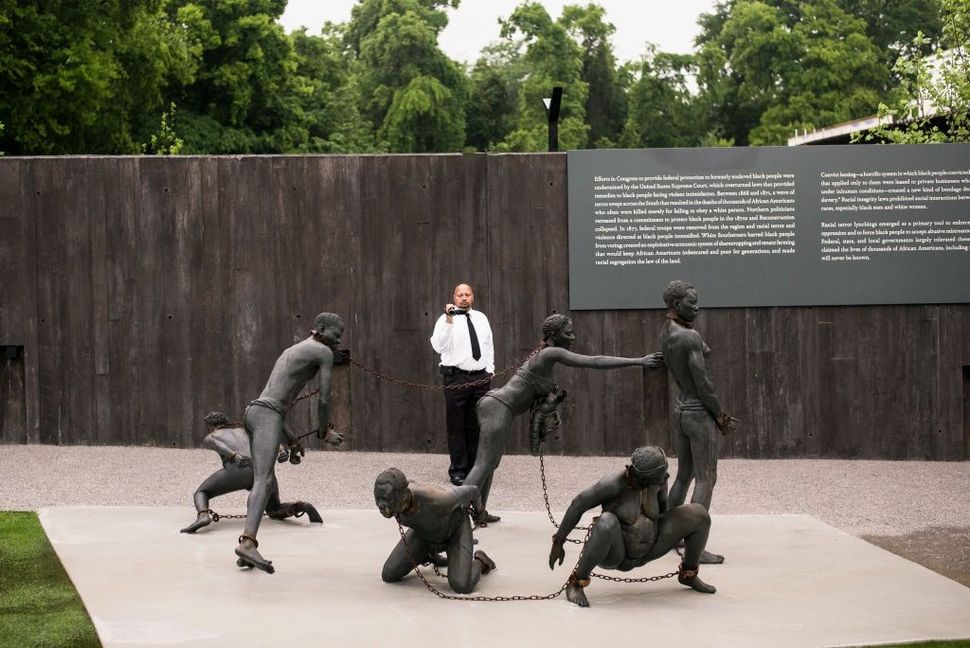 The National Memorial for Peace and Justice in Montgomery, Alabama Image by Getty Images

When I arrived at the Whitney Plantation in Louisiana earlier this summer, a staff member handed me a card with a photo of a statue of a young girl wearing a yellow dress. A quote on the back of the card explained that before this girl, Carlyle Stewart, was freed at the age of seven, she worked in the fields of the plantation.

“They had straps and a whip, and they better not catch you praying to God,” Stewart later told a researcher. “You can’t say your prayer.”

My wife and I were touring the South to learn about the history of racism in our country, and the Whitney Plantation, which memorializes the enslaved people who worked there, was our first stop.

On our tour, I learned new details about America’s brutal chattel slavery; I learned enslaved people who tried to escape had their hamstrings severed, and when pregnant women were whipped, they were partially buried face down to protect their valuable fetuses.

A few days later, at the National Memorial for Peace and Justice in Montgomery, Alabama, I learned that the popular understanding of lynching is woefully incomplete. Many of those murdered were black political and labor organizers. Lynching was, among other things, a tool for maintaining a broader white supremacist social order throughout much of this country well into the twentieth century.

As Jews enter the month of Elul and begin the season of teshuva — repentance — I’ve come to understand that I, along with many other white Americans, am collectively in a long process of penitence. Thanks in part to sites like those I visited this summer, mainstream white American culture seems to be finally taking seriously the important work of prominent black thinkers who place racial oppression at the center of this country’s history.

Ta-Nehisi Coates’s writing, new museums and the tearing down of confederate statues have all helped white Americans begin to internalize how important racial oppression is in American history. More recently, The New York Times began its 1619 Project, which commemorates 400 years since the beginning of American slavery. The support of leading Democratic presidential candidates for reparations for slavery indicates how this conversation is having an impact on mainstream white American consciousness.

Still, there has been resistance. The considerable conservative backlash against the 1619 Project shows that much of white America still resists accepting the centrality of racism in this country’s history and in how society functions today. But white liberals like me who consider themselves open to narratives of oppression also have much work to do. Before my trip this summer, I knew that this country was built by slaves and that racism continues today, but I had not yet begun the work of coming to terms with the horror that entailed.

After my time touring the South, I am more convinced than ever that this slow awakening among white Americans ought to be part of a larger process of national teshuva around racism and the atrocities against Native Americans. As we do this work of teshuva, I and other white Americans can learn from the Jewish tradition that teshuva means doing the difficult work of humbly accepting one’s misdeeds and breaking down one’s self image.

In his Mishneh Torah, Maimonides outlines a four-step process for teshuva: First, one confesses that one made a mistake and asks forgiveness. Next, one swears never to repeat the mistake. Then one does what one can to rectify the injustice, and finally, one acts differently if given the opportunity to repeat one’s misdeed.

We’ve clearly not gone through this process when it comes to making up for the crimes we have perpetrated as Americans. We are collectively still struggling with just the first step of acknowledgement in Maimonides’ four-step process.

The true work of this first step is difficult. As my wife and I drove through the South, we listened to books on tape by James Baldwin and Cornel West. Both writers suggest that a white acceptance of this country’s racial history would mean undoing the white conception of the United States as an innocent and virtuous actor in history. [Rabbi Danya Ruttenberg] for one has argued (https://www.washingtonpost.com/news/posteverything/wp/2017/09/18/we-still-have-time-to-repent-for-american-racism/) that teshuva should take place through reparations. Because of realities like mass incarceration and high infant mortality rates, there is an urgency to the need to rectify racial injustices in this country.

Jews know from the High Holy Days that the work of repentance means surrendering one’s sense of righteousness. In the Ashamnu prayer, for example, the congregation collectively confesses to an alphabetical list of sins as congregants tap their hearts, regardless of whether or not they personally committed these sins. In this time of year, Jews know that they must humble themselves so much that they can’t even catalog their misdeeds.

As the American Jewish community enters its most holy and reflective time of the year, perhaps we Jews can contribute to the broader conversation on race what we learn from this season of teshuva. Perhaps we can spread the message to white Americans that the urgent work of racial repair includes accepting that most of us don’t yet know the staggering extent of our country’s misdeeds.

George Altshuler is a rabbinical student at the Hebrew Union College – Jewish Institute of Religion in New York.