To Counter Israel’s Racism, Every Israeli Jew Should Vote For The Arab Joint List 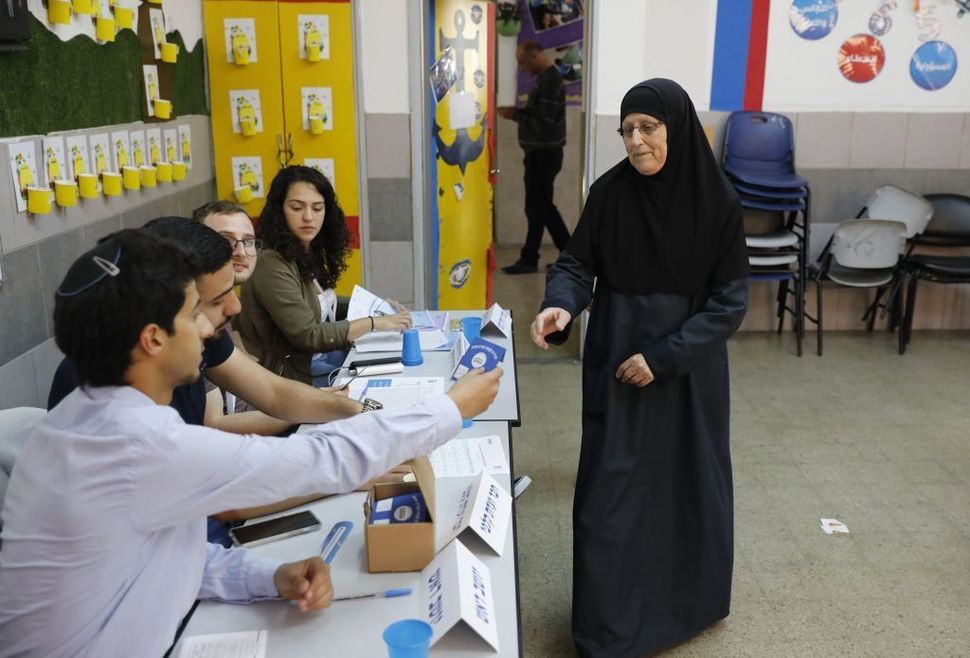 It happens in every election cycle: After beating the drum of the threat Iran poses to Israel, and after attacking the media, flying to Ukraine and England, and touting his special relationship with President Trump, Israeli Prime Minister Benjamin Netanyahu and his nationalist Likud Party always finish off their campaign with one final, racist push against Israel’s Arab population.

Who can forget election day in 2015 when Netanyahu warned that “droves of Arabs” were being bussed to the polls by the left, or the time just before the April 2019 election when Likud tried to suppress the Arab vote by placing cameras in polling stations.

The right’s attacks against the Arab population include accusations that Arabs are trying to “steal the elections” or that Arab politicians are conspiring with other parties to “overthrow the government,” as though Arab Israelis aren’t rightful citizens exercising their democratic rights. On Facebook and Twitter, Likud ads insist that “Only a big Likud will stop a Left and Arab government,” as though some citizens don’t deserve to have their representatives govern.

There’s really only one way to combat this racism that seeks to disenfranchise Israel’s minorities: vote for them.

For attacking the Arab population isn’t unique to Netanyahu. To center themselves on the Israeli electoral map, Jewish-dominant parties on the left, center, and right have been attacking Israel’s Arab citizens and their representatives. This leads not only to discrimination and marginalization but also to lower turnout in the Arab community, leading to a systematic underrepresentation in Israeli political life.

And when Arabs show a desire to be involved — again, as is their democratic right — they are put in their place. This election cycle, Ayman Odeh, leader of the Joint List of Arab parties, made a surprise and historic declaration, announcing that he would be willing to sit in a broad center-left party under certain conditions, including renewing the peace process with the Palestinians, reversing the controversial Nation Law, fighting crime rates in Arab areas, establishing a new Arab city, and building a hospital in an Arab city. The announcement was significant, for Arab parties had previously not been willing to sit in the government.

And yet, far from welcoming this decidedly democratic move, Blue and White leader Benny Gantz first ignored him, and then outright rejected him. Gantz and his running mate Yair Lapid said they couldn’t sit in a government with Odeh because the Balad members of the Joint List don’t recognize Israel as a Jewish state.

The exclusion of minorities from political life and representation is not only a problem for Arabs; it is the burning issue that’s tearing the Israeli society apart, whether it’s the exclusion of Arabs, Ethiopians, women, or leftists. It corrupts a society to have certain of its members be treated as less than.

And it for this reason that Jewish Israelis should vote for the Joint List.

Jewish Israelis should vote the Joint List to combat racism and hyper-nationalism. They should do so to signal to politicians that 20% of the population isn’t a monolith they can simply disregard as “Arabs.” Rather, this group is comprised of men and women, Christians, Muslims, and Jews, democrats, socialists, and conservatives who have opposing points of view, aspirations, and ambitions.

Gantz and his ilk may shy away from direct attacks against Arabs in order to portray themselves as centrists, insisting they will only sit with moderates to keep a status quo. But in Israeli politics, maintaining the status quo is extremism. Maintaining the status quo means demonizing minorities and pitting social sectors against each other. And it’s clear by now that Gantz and his fellow centrists aren’t offering a new vision for justice, equality, or unity. They are not talking about solving the occupation or the struggle of Israeli families to make ends meet. All they have to offer is that they are “not Netanyahu.”

But Netanyahu, as much as he’s the cause of this division, is only a symptom. Yes, he might go away, but the occupation will stay. Yes, he may go to jail for corruption, but the system he and others built will still be here. Yes, his harmful rhetoric against the media will stop, but the reality shown on TV will go on unless we take a different path and deal with the root causes that are making the Israeli society frail and weak.

Israelis should vote for the Joint List because it is one of the few parties that offer a reimagining of Israeli society for all its citizens based on a constitution, human and worker’s rights, free education, social housing, and peace with your neighbors and within your country; it’s a politics of addition instead of subtraction.

Many Jewish-Israelis might not share all the aspirations and values of the Joint List. Some goals of its representatives might be at odds with the traditional left Zionism, like the secular one-state the Balad members are advocating. But a debate inside a democratic tent is much better than walling off the opposition. Besides, as it stands today, concerns about maintaining democratic society are more realistic than fears that Balad will somehow get sixty seats and overthrow the Zionist majority.

In fact, there was Arab representation in the first twelve Israeli governments as part of the Labor’s satellite lists, and they sat in coalitions in the first twenty years of Israel’s existence. Although they had no minister, Arabs sat in the coalition and raised issues affecting their constituencies without changing the Jewish nature of Israel. As early as 1948, the Maki Jewish-Arab communist party was running for office in the newly formed state of Israel. Even though they didn’t sit in the coalition, the courage to stand together opened a debate that alleviated the plight of Arabs living under military rule.

Many Palestinian-Israelis see these Jewish-Arab coalitions as fig leaves masking massive inequalities, and many oppose Ayman Odeh’s Israeli socialist agenda. Many on the Palestinian side call for boycotting the election. But as rapper Tamer Nafar argued, “Our political presence in this system of inequality is way better than being absent. When we live in a democratic society, then we can boycott the elections.”

Having a joint Jewish-Arab party be a real force in the next Knesset will make Israelis, Jews and Arabs, contend with the reality they live in and the future they want to see. Blue and White’s slogan is “Israel before everything.” But the truth is, before anything, we must ask, what does it mean to be an “Israeli?”

The answer is clear: The Joint List represents what it means to be Israeli. Because the true Israel is an Israel of Muslims, Christians, Jews, Bedouins, Communists, Nationalists and liberals, religious and secular, all debating the nature of this place. It is not some imagined place only reserved for certain types of Jews or a country that is an island unto itself.

To Counter Israel’s Racism, Every Israeli Jew Should Vote For The Arab Joint List