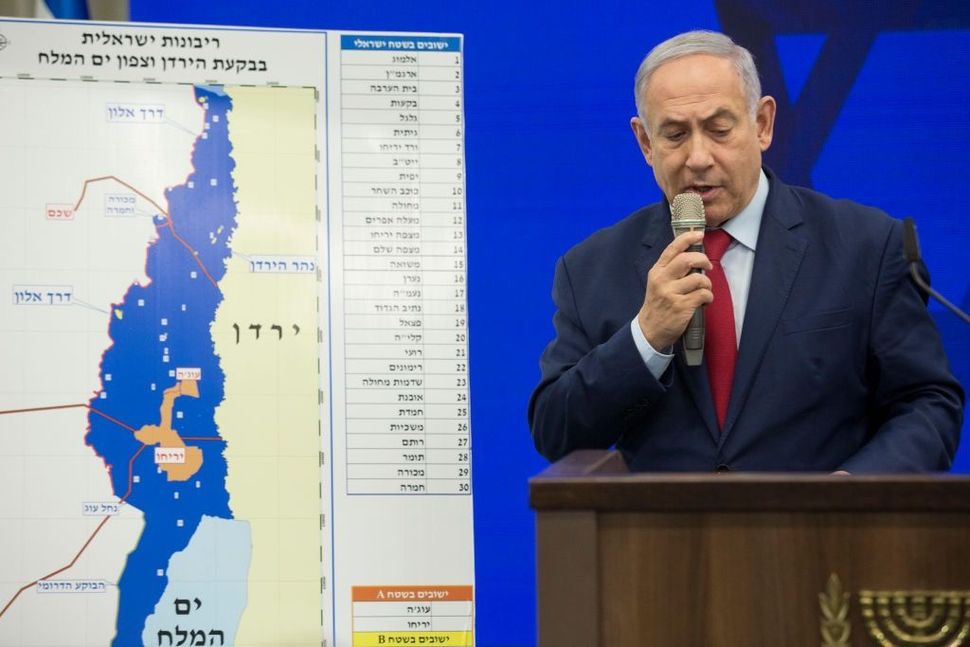 Standing next to an easel bearing a large map of Israel stands Palestinian President Mahmoud Abbas. Pointing to the map, Abbas declares that, if re-elected, he would annex one third of Israel. The Palestinian state’s new borders would include some of the most valuable parts of Israel, such as Tel Aviv and Haifa, and maybe even the historic city of Acre where battles during the Crusades were fought. The annexation, he goes on, would cast the thousands of Israelis who currently lived on the land into limbo; there would be no guarantee of Palestinian citizenship, of equal rights, or even that they would be allowed to remain, despite having lived there for generations.

On Tuesday after Israeli Prime Minister Benjamin Netanyahu declared his intent to do just this to the Palestinians and annex the Jordan Valley. If Bibi has his way, the estimated 65,000 Palestinians living in the area would enter a state of limbo, because he has given no details about what would happen to them. Plus, the land Netanyahu wants to annex in the fertile Jordan Valley has long been viewed by Palestinians as “the breadbasket of a future state.”

The plan, if implemented, would be the final nail in the coffin of the two state solution. With the Jordan Valley as part of Israel, Palestinians would be left with a territory that was a third smaller and surrounded by Israel on all sides.

With the two state solution dead, the only possible alternative for those seeking justice for Palestinians and basic human rights would be a one state solution – a state of all its citizens – which is what the boycott, divestment and sanctions movement is advocating.

And in killing the two state solution, Netanyahu is effectively recruiting for the BDS movement.

This is not even Bibi’s first time making a proposal like this. He made a similar statement before the April Israeli elections, leading the Israeli paper Haaretz dismissed Netanyahu’s proposals as “a recycled pledge that’s unlikely to shift the direction of a single Israeli voter.” One recent poll found that nearly half of Jewish Israelis would favor annexation if supported by the Trump administration.

But this latest plan is much more fleshed out. And what’s more alarming is that this time, Netanyahu bragged it will actually happen, due to his “personal relationship with President Trump.” (The White House confirmed they were made aware of the proposal before it was released but has not publicly endorsed it.)

And keep in mind that Netanyahu has kept his past “election eve” promises, when he promised both in 2015 and this past April to bar the creation of a Palestinian state on his watch.

Netanyahu has also supported the construction of settlements in the West Bank, evidence of his commitment to prevent self-determination for the millions of Palestinian Muslims and Christians who live there. These are people like my family, who have lived under military occupation for generations, and in some cases have even died without ever having many of the basic freedoms that others take for granted.

Of the 2020 Democratic presidential candidates, all but Bernie Sanders have been silent on the annexation proposal so far, though as Peter Beinart noted in these pages on Tuesday, Pete Buttigieg has supported action in the past, even suggesting that he’d be willing as president to stop U.S. military aid to Israel if Netanyahu should pursue annexation of parts of the West Bank.

The United Nations and the EU, on the other hand, quickly condemned Bibi’s proposal. UN spokesperson Stephane Dujarric slammed the land grab as being “without any international legal effect,” labeling it as “devastating” to “regional peace,” and an EU spokesman called the plan “illegal” under international law and capable of undermining “the prospects for lasting peace.”

None of that matters to Bibi, who is in the fight for and of his political life. Netanyahu, like President Trump, will say and do almost anything to win an election, including using bigotry.

But if Netanyahu does win this election and — with or without Trump’s backing — defies international law and before our eyes grabs one third of the West Bank, you can expect a surge in people becoming active in the BDS movement. I made this same prediction in April shortly before the last Israeli election, and that was when Bibi was simply opposing a Palestinian state.

If you oppose Netanyahu’s annexation and want to impact Israeli policy to champion equality for Palestinian Christians and Muslim, barring the emergence of a new movement, BDS is the only visible vehicle to do just that. And the argument that Netanyahu’s policies are violating international law and denying human rights for Palestinians will be even more persuasive as the world watches Netanyahu’s massive land grab and possible ethnic cleansing of Palestinians play out.

I don’t know if BDS will ultimately impact Israeli policy in the long run. But it’s likely that it will be far more visible than it is today. And if that happens, the person responsible will be Netanyahu — with an assist from Trump.