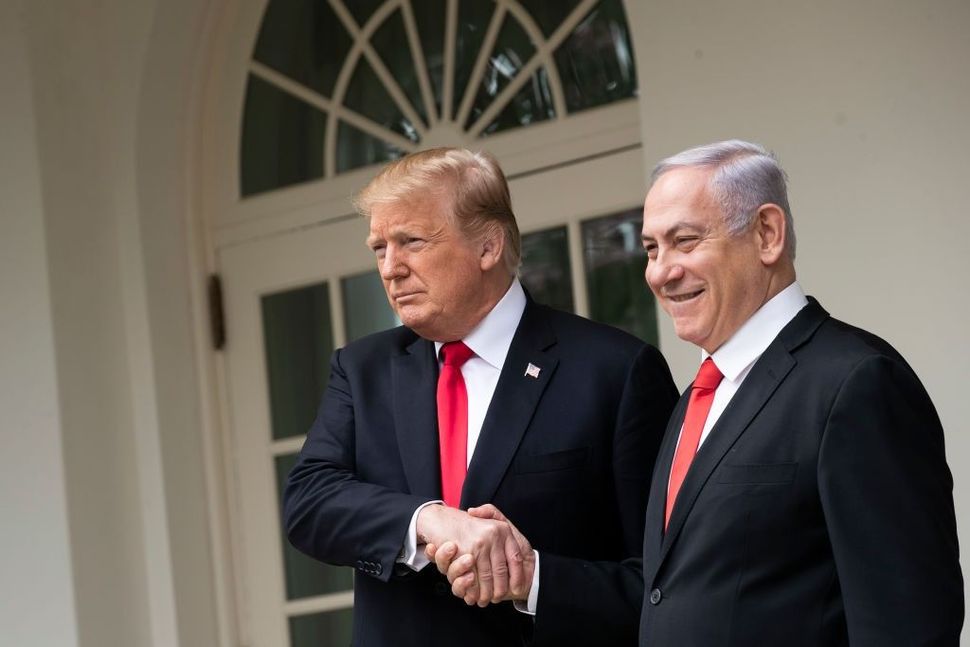 WASHINGTON, DC – MARCH 25: (L-R) U.S. President Donald Trump and Prime Minister of Israel Benjamin Netanyahu shake hands while walking through the colonnade prior to an Oval Office meeting at the White House March 25, 2019 in Washington, DC. Netanyahu is cutting short his visit to Washington due to a rocket attack in central Israel that had injured seven people. (Photo by Drew Angerer/Getty Images) Image by Getty Images

President Trump and Israeli Prime Minister Benjamin Netanyahu have so very much in common.

They’re both being investigated for corruption; Netanyahu is on the verge of being indicted, while Trump is still being investigated by the U.S. Attorney in the Southern District of New York. Both Bibi and Trump use the term “Fake News” to delegitimize media outlets critical of them. And both have courted the support of extremists. Trump has retweeted visible white supremacists and defended racists as “fine people” after Charlottesville, while Netanyahu recently embraced the political party known as “Jewish Power” which has been called the KKK of Israel.

And now these BFF’s have something else in common: They both oppose self-determination for Palestinians. And in so doing, Netanyahu and Trump will almost certainly push people desperate for justice to join the Boycott, Divestment and Sanctions movement, known as BDS.

Bibi has made it clear for a while now that he opposes a Palestinian state, though the American media has for the most part shockingly ignored this. He stated it point blank in 2015 when he last ran for re-election, insisting there will never be a Palestinian state on his watch. And just a few weeks ago, he reaffirmed that position. He told Israeli voters, “A Palestinian state would endanger our existence” and slammed his main political rivals by claiming that in contrast to him, “Sooner or later, probably sooner, they will establish a Palestinian state.”

And because Netanyahu opposes both a Palestinian state and — one presumes — granting the millions of Palestinians in the West Bank and Gaza the right to vote in Israeli elections, he is committed to permanently dispossessing them of civil rights and citizenship in any state — a Palestinian one or a Jewish one.

And it now appears that Trump is following the lead of his pal. Last week, Trump’s Secretary of State Mike Pompeo, while testifying before Congress, refused to commit to a two-state solution. “We think we have some ideas that are new and fresh and different,” he said.

I can only imagine what “new ideas” Trump has in store. After all, Trump has already cruelly cut over $360 million in aid to the United Nations Relief and Works Agency that is a lifeline for countless Palestinian refugees, providing them with food, medical care and schooling.

Add to that, Trump ended $25 million in aid to hospitals in East Jerusalem that provide specialized care for Palestinians unavailable in the Palestinian territories. And Pompeo’s State Department recently slashed $200 million dollars in aid that had been set aside for Palestinian infrastructure projects in the West Bank and Gaza.

And this is where BDS comes in. With Netanyahu emphatically opposed to Palestinian self-determination and Trump seemingly on board with that, there are limited options for people who support human rights for Palestinians and the creation of a Palestinian state. As far I can tell, there are three:

They can simply surrender to these powerful forces and stop advocating for Palestinians. Obviously, that’s an unlikely option.

Or, they can continue to advocate for the Palestinians with more traditional ways of trying to effectuate a change of policy, such as by lobbying elected officials, making the case in the media, and the like. That’s where I am and have been for years as I’ve tried to present Palestinians like my family living in the West Bank as human beings deserving of human rights and self-determination.

But with leaders like Trump and Bibi at the helm, this option seems less and less effective with every passing day. Which leads me to the third option, which is join the BDS movement and the call to put economic pressure on Israel, since it doesn’t seem willing to end the occupation on its own.

I’ve had my reasons for not getting involved in BDS before, mostly because I have long supported a two-state solution, while many in the BDS movement seek a one-state solution. I respect their push for a single state where Israelis and Palestinians would be equal citizens, but I would prefer to see my family have their own nation that they can govern.

But if Netanyahu and Trump both team up to say no to Palestine, and yes to Palestinians living under permanent occupation with no civil rights, where does that leave people like me? Do I simply continue to repeat the same actions over and over and hope for a different result?

Or do I join BDS?

Of course, BDS has its own problems. For starters, as of now at least, while it has grabbed some headlines, it’s proved as ineffective as my own methods. Despite some visible successes by the BDS movement since its founding in 2005, Israel’s economy has been growing robustly the past few years plus foreign direct investments and tourism are at or near all times highs. There’s no real delegitimization happening, only bad PR for Netanyahu’s regime. And as a person who supports two states, I’m not seeking to “delegitimize” the state of Israel, which some on the right have claimed is the true goal of BDS.

The answer for me — and I suspect others — is to wait for the results of the April 9th election in Israel.

If Netanyahu wins, it’s likely Trump will formally embrace Bibi’s position of no Palestinian state. Then it seems to me the only option I have is to reluctantly become a part of the BDS movement in order to attempt to change this policy.

And if I’m right, many others who had been hesitant to join the BDS movement will get on board as well. And to those upset with that result, you have two people to blame: Netanyahu and Trump.