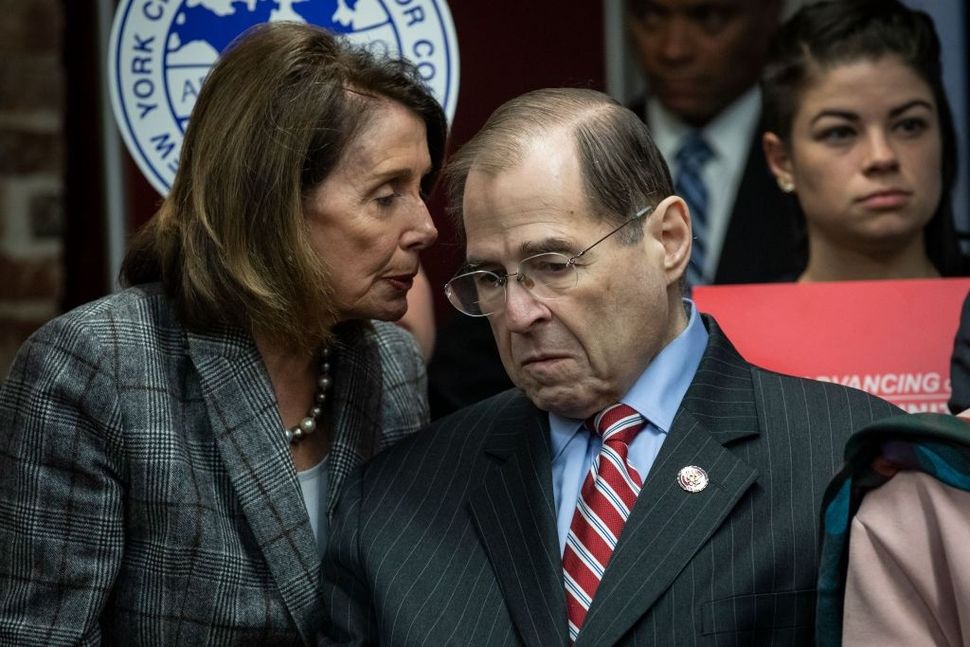 House Democrats have introduced a new bi-partisan resolution opposing the boycott of Israel, known as BDS, and reaffirming their support for a two state solution to the Israeli-Palestinian conflict. On Thursday afternoon, Republican Representatives Lee Zeldin and Ann Wagner joined Representatives Brad Schneider and Jerrold Nadler in support of a resolution “opposing efforts to delegitimize the State of Israel and the Global Boycott, Divestment, and Sanctions Movement targeting Israel.”

The resolution comes on the heels of a Republican-led effort to oppose BDS; S1, the first bill introduced in 2019, sought to affirm the right of local and state governments to boycott those who who boycott Israel. Free speech advocates, as well as a number of local judges, objected to S1 on the grounds that it violated the First Amendment. So did a number of Democrats, and all but one of the Democratic senators running for president in 2020 voted against it, despite the fact that each has publicly voiced opposition to the boycott.

As a result, Republicans have been casting the Democrats as “anti-Israel” and even “pro-BDS,” claims that the new resolution seeks to directly rebut by opposing BDS without infringing on free speech. According to a source with knowledge of the resolution, it was modeled on a similar bill opposing BDS that passed in the New York City Council in 2016, which the ACLU did not oppose.

The resolution opposes BDS on the grounds that it “undermines the possibility for a negotiated solution to the Israeli-Palestinian conflict by demanding concessions of one party alone and encouraging the Palestinians to reject negotiations in favor of international pressure.”

The resolution argues that the BDS movement “does not favor a two-state solution” and “does not recognize, and many of its supporters explicitly deny, the right of the Jewish people to national self-determination.” While the BDS movement’s platform doesn’t explicitly oppose a two-state solution, many of its leaders do, and its insistence on the right of return for Palestinian refugees is viewed by many as essentially advocating for the end of a Jewish majority state.

This commitment to a two-state solution was also absent from S1; indeed, under the Trump Administration, Israeli Prime Minister Benjamin Netanyahu has been free to pursue something of a one-state solution, dropping all pretense to pursuing an end to the occupation of the Palestinians. And just last week, the U.S. State Department dropped the word “occupied” from its report about the West Bank, Gaza, and the Golan.

By insisting on a two-state solution and opposing BDS without infringing on the First Amendment rights of American citizens in so doing, the resolution will defang Republican efforts to cast Democrats as anti-Israel.

Well, it will if Democrats vote for it.

Two of their own — Representative Ilhan Omar of Minnesota and Representative Rashida Tlaib support BDS. And last time Democrats tried to pass a resolution that took issue with Omar, after comments she made that utilized anti-Semitic tropes, she received a wellspring of support from the Congressional Black Caucus as well as the Progressive Caucus. Even some of the most prominent candidates for president in 2020 stood by her.

Ironically, the resolution, which casts BDS as undermining a two-state solution, perfectly reflects Omar’s own view on the topic that she expressed during her campaign, before she came out in support of BDS. At a forum for Democratic candidates before the election, Omar was asked about whether she supports BDS.

“I believe right now with the BDS movement, it’s not helpful in getting that two-state solution,” she told Jewish constituents. “I think the particular purpose for [BDS] is to make sure that there is pressure, and I think that pressure really is counteractive. Because in order for us to have a process of getting to a two-state solution, people have to be willing to come to the table and have a conversation about how that is going to be possible and I think that stops the dialogue.”

It will be interesting to see if Omar votes for the resolution, which so perfectly reflects her previously-stated view on BDS, or if she will choose to stand by her support for BDS.

And if she votes against it, it will be interesting to see if the Democrats running for president will publicly back the resolution, which is pro-Israel but anti-BDS — like they themselves have claimed to be — or if they will again choose to stand by her.

The resolution will grant pro-Israel Democrats a landing pad on which to plausibly fight back against cynical Republican barbs. The question is whether presidential hopefuls are more worried about fighting the right — or embracing the left.

Batya Ungar-Sargon is the opinion editor of the Forward. Her email is [email protected]orward.com. Follow her on Twitter @bungarsargon.