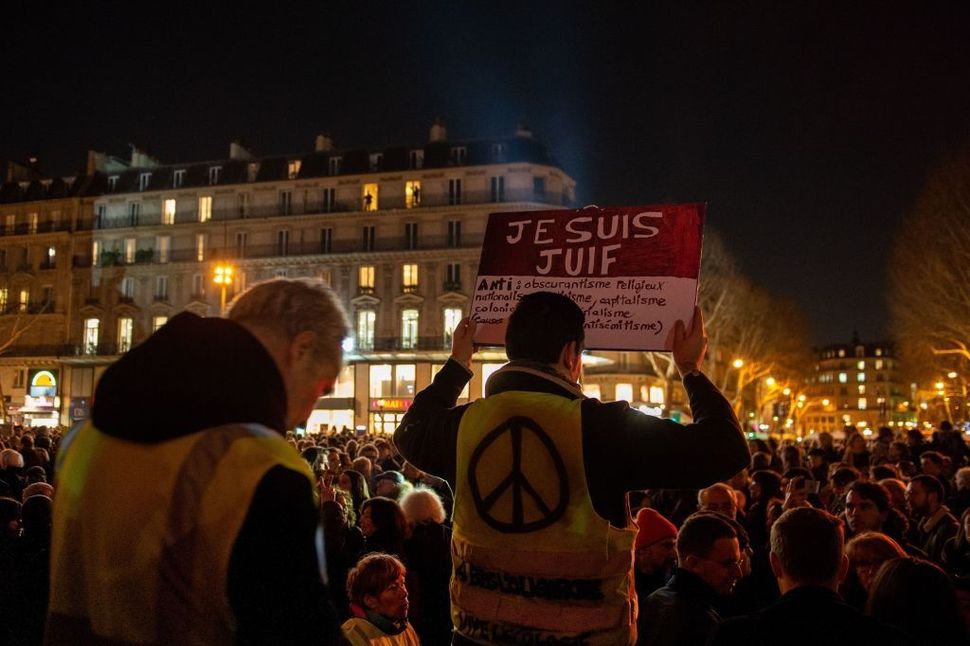 People take part in a rally against antisemitism at Republique square in Paris, on February 19, 2019 after a flare-up of anti-Semitic acts culminated in a violent tirade against a prominent writer during ‘yellow vest’ anti-government protests last weekend. Image by Getty Images

In a recent op-ed in these pages, Peter Beinart argued that anti-Zionism — the ideology that posits that Israel does not have a right to exist as a Jewish state — is not inherently anti-Semitic.

Beinart’s claim stands in stark contrast to what polling has shown, namely, that anti-Semitic beliefs and anti-Zionism are positively correlated. Furthermore, most Jews regard eliminationist statements about Israel as anti-Semitic, as well as the most popular anti-Zionist movement — the boycott, divestment and sanctions movement movement, known as BDS. All prominent BDS activists advocate dismantling the State of Israel.

Since BDS is in the news, here’s its co-founder Omar Barghouti calling for abolishing Israel entirely. Let’s be clear what this is about. pic.twitter.com/aSur9Dr2EU

Beinart’s claim also stands in contrast to the the Macpherson principle, which generally ascribes to the targets of racism the right to define racism against themselves. Beinart acknowledges that this is generally the case. Still, he dismisses any definition of anti-Semitism formulated by mainstream Jewish communal organizations on the grounds that they are typically pro-Israel.

“It’s an understandable impulse: Let the people threatened by anti-Semitism define anti-Semitism,” he allows. “The problem is that, in many countries, Jewish leaders serve both as defenders of local Jewish interests and defenders of the Israeli government.”

What Beinart ignores is that our communal groups in fact reflect the beliefs of the vast majority of Jews, as confirmed by polls gauging the opinions of the Jewish community.

In a recent survey by the European Union Agency for Fundamental Rights, 88% of European Jews regarded the statement “The world would be a better place without Israel” as anti-Semitic, and 72% considered boycotting Israel to be anti-Semitic.

New poll shows that the vast majority of Jews consider anti-Zionism to be antisemitic. @EURightsAgency survey: 88% of EU Jews regard as antisemitic the statement “The world would be a better place without Israel”:https://t.co/CfJzYri4hN

The notion that anti-Zionism is anti-Semitic is prevalent outside the Jewish community as well. A YouGov poll found that the majority of British people think that “hating Israel and questioning its right to exist” is anti-Semitic.

And there’s proof coming from the other end, too. A recent survey found that the majority of British people who support boycotting Israel agree with at least one anti-Semitic statement about Jews.

The data show a positive correlation between anti-Semitic beliefs and the likelihood of supporting the Israel boycott; that is, boycott supporters are significantly more likely to be anti-Semitic than the general population, though the study also found that 42% of those who support boycotting Israel bear no hostility to Jews, so one must not assume that all proponents of an Israel boycott are anti-Semites.

More accurate would be the formulation Larry Summers came up with, that BDS is “anti-Semitic in its effect, if not in its intent.” Were the one state from the river and the sea championed by all major BDS activists to come to fruition, it is unlikely that the Jewish people would continue to have a refuge in Eretz Yisrael as codified in Israel’s Law of Return. Politicians from all three major Israeli majority-Arab parties have stated that they favor the repeal of the Law of Return, and it is impossible to imagine it would survive in a Palestinian-majority state.

Worse, a recent poll of Palestinians in the West Bank and Gaza found that 17% favor expulsion of Jews in their fantasy of how to end the conflict, and 8% support one state in which Jews would be denied equal rights (i.e. apartheid). 22% of respondents rejected all options or responded “do not know,” which the pollsters categorized as “other.” It is troubling that “other” is the most popular option selected by Hamas supporters (their second favorite option is expulsion).

When one considers that 47% of Palestinians favor expulsion, apartheid, or the ominous “other” preferred by Hamas supporters, it is difficult to imagine how one state could possibly work.

The one state advocated by all prominent BDS activists would certainly exhibit structural anti-Semitism, in which, at a minimum, Jews would lose the ability to flee anti-Semitism in the diaspora and seek refuge in Israel and at a maximum have their civil rights denied. It’s hard not to view people advocating this as advocating for a world that would be structurally worse for Jews — just 75 years after two-thirds of European Jews were exterminated.

The civic nationalism that Beinart touts in his piece existed at the time of the Holocaust, and what it meant then was that Jews fleeing the Holocaust were denied refuge in the US, and forced to return to Europe’s killing fields.

Almost all Jews are Zionists. It seems that the lesson we took from the Holocaust is the need for a state that serves as a sanctuary for the Jewish people. It would be unconscionable to eliminate this sanctuary, especially given that 38% of European Jews surveyed by FRA have considered emigrating because they do not feel safe as a Jew.

Finally, Beinart’s discussion of the right to self-determination is flawed, as he implies a false equivalence between Israel’s continued existence as a Jewish state, whose sovereignty and territorial integrity (inside the Green Line) is protected by the UN Charter, and secessionist movements, such as the Catalan independence movement.

As explained in an article published by The American Society of International Law, “international law bestows on all peoples the right to self-determination, but… the right to external self-determination, exercised through remedial secession, only applies in extreme circumstances, to colonized and severely persecuted peoples.” The article argues that these conditions do not apply to the Catalan, and thus, they do not have a right of secession.

Beinart’s analogy to South Africa also fails, as white South Africans do not constitute a people who are entitled to exercise the right of self-determination any more than white Americans constitute a distinct people, whereas the Jewish people are not only a nation with historical and religious roots in Eretz Yisrael, but also a historically persecuted people, one-third of whom were exterminated just 75 years ago.

But the solution to the structurally anti-Palestinian status quo is not to infringe on the Jewish people’s right to self-determination and impose a structurally anti-Semitic successor state. The solution is to pursue what both sides agree is the best resolution to this century of conflict: two states for two peoples. The Jewish people will not cede their sovereignty without a fight, so any concrete action taken to dismantle the state of Israel, infringing on the Jewish people’s right to self-determination, will inevitably lead to war.

To help pave the path toward achieving a peace agreement that respects both peoples’ right to self-determination, Israelis can choose on April 9th not to re-elect a governing party that officially opposes a Palestinian state.