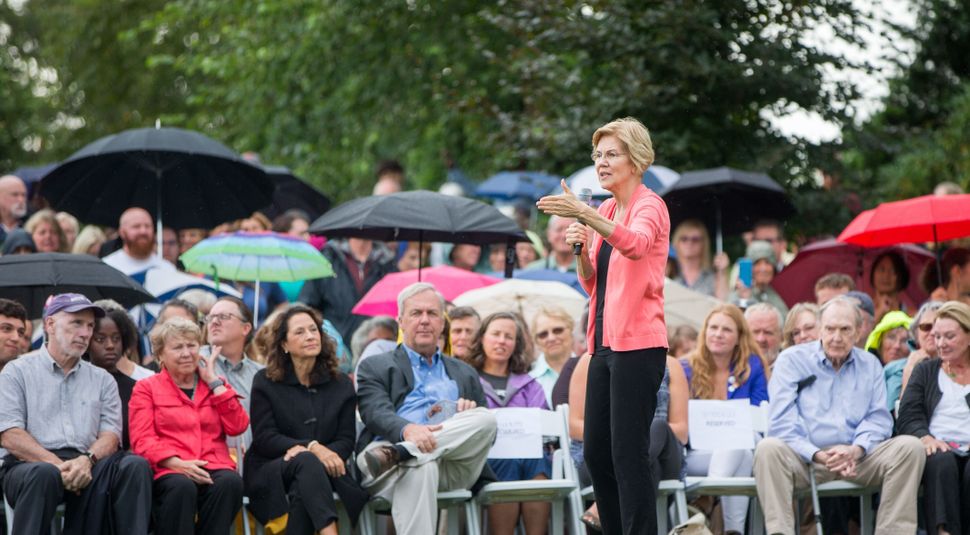 As the Democratic primary for the 2020 election heats up and candidates drop like flies, two candidates appear to be heading towards a face-off: former Vice President Joe Biden and Massachusetts senator Elizabeth Warren.

According to a Morning Consult and RealClearPolitics averaging, Biden is still ahead by a comfortable range of 10-12 percentage points. And Warren has yet to significantly pass Vermont Senator Bernie Sanders, even as she maintains solid positioning just to his left. Still, her policy positions are more coherent than Sanders’ or Bidens’, and she’s showed unmistakable energy on the campaign trail.

But the true test for Warren will not be her proposals or her stump speech. Warren’s ability to secure the nomination depends entirely on where she stands with Black voters.

No Democrat can win this primary without the Black vote, the most dominant, and, in a primary, occasionally the most unpredictable in the Party, representing over a quarter of the Democratic electorate.

And no Democratic nominee can win the presidency without it, either. Hillary Clinton found this out the hard way when she opted out of campaigning where there were crucial pockets of Black voters, assuming that they’d just be there when she asked. That arrogant miscalculation, compounded by voter suppression and an already jaded Black electorate, resulted in overall Black voter turnout dropping by seven percentage points in 2016.

Warren, then, will need to resonate with Black voters if she’s to realize any hope of becoming the Democratic nominee. The first real test will be in the early primary states in February; two out of four of those states, Nevada and South Carolina, are places where Black residents constitute more than 10% of the population, at 12% and nearly 30% respectively.

Warren’s topline messaging on equity, wage, income, gun violence and economic mobility issues might be hitting the right chords at first impression. It seems to be resonating with the Black intelligentsia. But is she resonating with the larger Black electorate as it examines her from their kitchen table, from the neighborhood and church? Are they excited when her name is mentioned in the barber shop and hair salon? It’s unclear. She’s in second place among Black voters in the most recent YouGov/Economist poll, with 44% of the vote, but that’s miles behind Biden, who still enjoys nearly 68% Black support and it virtually tied with Sanders’ 40%. The latest Quinnipiac poll, however, shows both Warren and Sanders barely budging with Black voters, at a paltry 10% each, while Biden is at a very comfortable 46%.

Other big questions loom: How is she doing among Black Millennials? How will she fare with the always reliable blocs of Black senior and Black woman voters, too? And will Black men warm up to her?

Warren took a very early stand when the pack was crowded on Reparations, one that was received positively for the most part in the Black community. But it’s hard to see that competing with the street credibility that Biden brings from his service with Barack Obama.

If there’s one thing Black voters are, it’s loyal.

There’s another issue that’s being ignored by the candidates that could explain Biden’s continued popularity: Black voters aren’t all on the same progressive page with respect to issues like education, health care and — most prominently — immigration. Democrats are woefully underestimating the tension in the immigration debate, and how lots of Black voters are perceiving it, namely, in a way that will be exploitable by Trump and the Republicans.

Worse, there is still a pervasive view in the Black community that immigration is being more centralized than the problems faced by Black voters. And the belief that migrants taking Black jobs is also not a thing of the past. It was something you felt in the room during the debate at Texas Southern University, a major Historically Black College and University: an impatience with the topic of immigration, and the feeling that it was a missed opportunity to address topics of more importance to the Black community.

Democrats will have to manage it better. And Warren specifically will have to overcome one last hurdle to Black support: being a White woman. As the Black electorate heads into 2020, it’s just fed up of White woman politics. More than half of the White female electorate voted for Trump in 2016, when it was assumed so many would do the opposite. That is an exit polling data point that, to this day, continues to frustrate the Black grasstops and grassroots alike. And as recent polls show, nearly half of White women voters still approve of the President’s job performance, even after all the chaos, corruption and open sexism of the current administration.

In a nutshell, Black voters, especially Black women voters, feel politically betrayed by White women. And given the President’s high approval ratings with White women, they might be forgiven for looking at Warren and seeing Kellyanne Conway or Laura Ingraham or former White House press secretary Sarah Huckabee-Sanders, evidenced by the ongoing skirmishes of politics and ideology between Black and White feminists and commentators.

For Democrats to ignore this problem would be to repeat Clinton’s failure to invest in Black voters in 2016 — a move also viewed as something of a betrayal, and another example of when the Black vote was taken for granted.

It may be counter-productive, and the type of split that could endanger Democratic prospects in 2020.

Charles Ellison is Principal and Chief Strategist of B|E Strategy. He is also Host/Executive Producer of “Reality Check,” a public affairs program airing Mon-Thur, 4-7pm ET on WURD radio (Philadelphia), Contributing Editor for The Philadelphia Citizen and Contributing Editor to theRoot.com. Follow him on Twitter @ellisonreport.