Race – But Not Justice – Were The Winners At The Democratic Debates 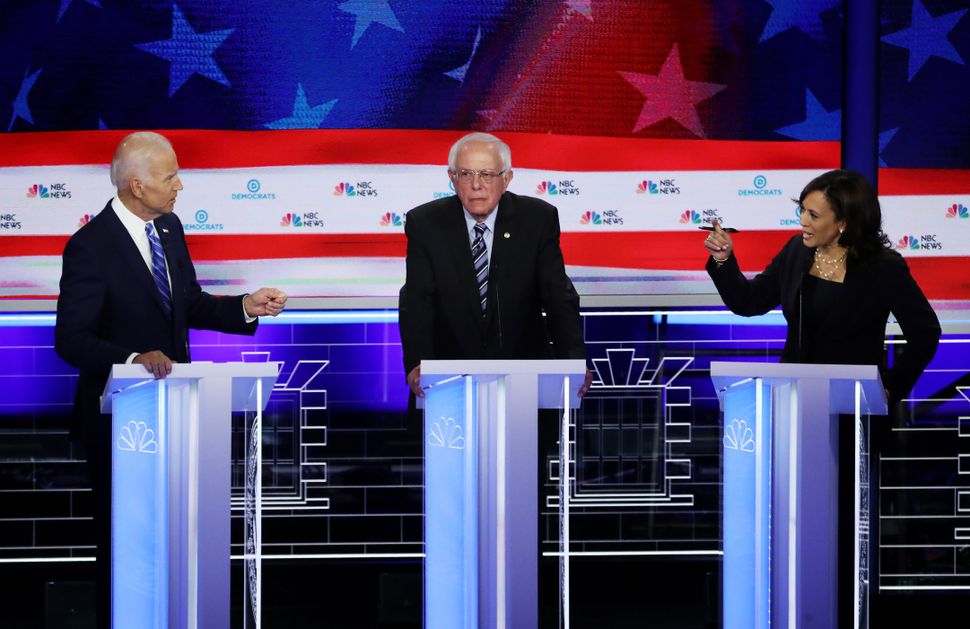 On Thursday, the Supreme Court stuck a country club steak knife deep into the gut of democracy when it barred challenges to gerrymandering. But somehow, voting rights — preserving the integrity of the American political process — did not come up as a topic. NBC moderators didn’t even bother to ask about it on what was the second night of the Democratic primary debates. Voter suppression, apparently, isn’t a thing. That the Democratic candidates themselves didn’t raise it is telling.

This is doubly troubling as the two breakout stars were people of color, who come from communities most disenfranchised by voting restrictions: Senator Kamala Harris and Julian Castro. Debate nights are all about who’s memorable, and these two stuck out as such. Each stole their night — Castro the first and Harris the second — by decibels and nerve. Each bowed in as if they had nothing to lose, a sort of “Well, here goes.” They were hungry in a way the others just weren’t.

Castro has barely registered in polling, steady at just 1% since he entered, and Harris has found herself slipping since the rise of Elizabeth Warren. Both thwarted expectations because the conventional wisdom only had White people shining these past two nights: It was all about how much higher could Warren rise, how intense would the heat between Biden and Sanders be. Once the dust settled, we were talking about the serious Latino man with the catchy historical last name and the bi-racial Black woman Black voters hadn’t figured out yet.

Safe to say that both nights did leave serious voters now reassessing the field. Should that reassessment turn into marked shifts in polling, and should Castro and Harris maintain momentum, it could radically alter the composition of the field.

Up till last night, primary wisdom showed that even if Democratic voters wanted to try something new, Vice President Joe Biden would still be the one. We need one old and arrogant White man taking on another, was the thought.

But last night, Harris came for Biden in a big way, peppering him with questions about his opposition to busing — and revealing that she had been one of those children bused to her school.

Biden wasn’t fatally wounded as Harris went into offense on race, but he was not able to articulate a decent response and, leaning on his seasoned gruff to get him through it. He had an entire week to get it together on his busing stance from the ‘70s, and all he could come up with was states rights?

If Biden is having trouble fending off Harris, then how’s he going to do it against Trump? Harris’ training as a prosecutor is now an asset.

Harris even went so far as to break the cardinal rule of criticizing President Obama and Biden, perhaps figuring she’s naturally shielded in a number of ways as the only Black woman on stage.

In the meantime, Biden still has legroom, on average 38% versus Harris’ 6%. She has a long way to go and has to muster more moments like last night to keep the fundraising going into next year.

Democratic voters do want someone who can take on Trump and both nights also spent an enormous amount of time on immigration and the unfolding humanitarian crisis on the border. But on the second night, Black voters seemed to get top billing. Harris seemed to have her eye trained squarely on Biden’s support in the Black community. And Pete Buttigieg came prepared with answers on his very own police shooting crisis back home, though the solid jabs from Eric Swallwell seemed to do significant harm.

And yet, despite the symbolic focus on race, many issues of relevance to our community didn’t come up. K-12 education is, last checked, in a state of crisis, and so is the very foundation of fair elections. Housing didn’t feature as a problem needing a solution, nor did poverty, homelessness, and food insecurity.

We got some good TV, at least the insiders and political junkies. But I’m just not sure the average American voter, or jaded non-voter on the sidelines, would agree.

Race – But Not Justice – Were The Winners At The Democratic Debates