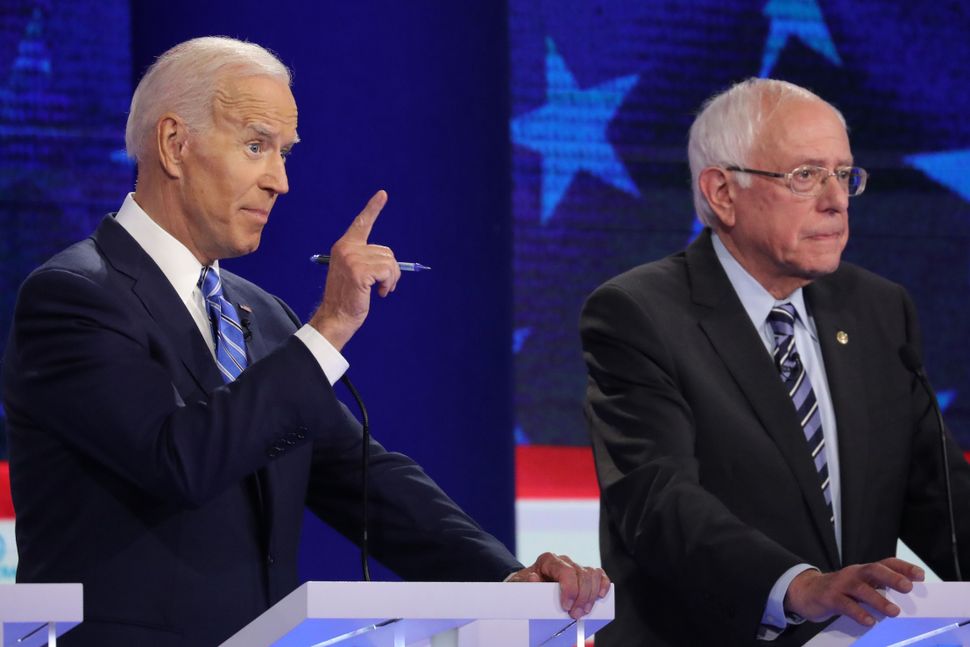 On Wednesday, hours before the first Democratic presidential primary debate aired, the Bloomberg columnist Jonathan Bernstein predicted that Democrats would evince a major party image never before seen in American politics. He was mainly speaking of the unprecedented racial and gender diversity among the Democratic hopefuls, but he could have just as easily been referencing ambitious policy positions, from completely replacing America’s health care system to writing off $1.6 trillion of student loans, that no one could have imagined being discussed among leading Democrats even just a few years ago.

George McGovern’s catastrophic loss in 1972 is often cited by centrist Democrats as a warning against running too far left. Surely if Senator McGovern were alive and running today with the same policy positions deemed utopian mishugas in his time, he would place somewhere between the center and the right of the pack. But while revolutionary ideas (at least for the United States) from the Democratic Socialists of America and left wing thinkers have received an unlikely national hearing, they did not escape attack from the party’s traditional moderate and liberal stalwarts, who declared in no uncertain terms they wouldn’t go down without a fight.

Republicans may dream of a Democratic Party represented by socialists Bernie Sanders and Alexandria Ocasio-Cortez, but neither the campaign nor the data support this wishful thinking, which helps explain why centrists like Amy Klobuchar, Pete Buttigieg, John Hickenlooper, Michael Bennet, and Joe Biden all see a path to the nomination if they somehow manage to beat out all the other moderates.

It also explains why some of the liberal candidates — Kamala Harris and Kirsten Gillibrand — tread more carefully, and reserved their strongest points for racial justice and anti-corruption, respectively. Elizabeth Warren, who is running just slightly right of Sanders on most issues, maintained her distinct reputation as a sober and learned left-wing candidate.

International affairs, the one area where an American president holds a greater deal of policy sway than Congress, was relegated to an afterthought during both debates. But when it did come up, leading candidates largely stayed within the confines of the Washington consensus, favoring American leadership in confronting threats from adversaries. A brief shot from Sanders towards Biden on the Iraq War could have been lifted straight from the 2008 primary debates. Democrats certainly distinguished themselves from Trump, but they did so in ways that were more Foreign Affairs than Jacobin or The Baffler.

On health care, Democrats had a robust debate on the merits of a single payer healthcare system against a more competitive market system that includes a public option (essentially a Medicare “buy-in”). Cory Booker, Klobuchar and Buttigieg in particular were frank about the relative modesty of their plans compared to the “revolution” proposed by Sanders — all, though, without losing sight of the goal of universal coverage. Harris and Gillibrand, who both support Medicare for All, were noticeably not as excited as Sanders to tell Americans that private health insurance would go the way of the Dodo.

It was on immigration and racial justice where there was a noticeable shift to the left in the baseline positions of an overwhelming majority of the candidates, nearly all of whom pledged to decriminalize the act of crossing into the country without documentation. The Trump administration’s loathsome treatment of undocumented immigrants and their families has sparked a backlash from rank-and-file Democrats that will be difficult to contain in a moderate framework.

The most memorable clip of both evenings was unquestionably Harris’ powerful confrontation with Biden over the latter’s praise of former segregationist colleagues and opposition to busing in the 1970s. It was jarring to see the most recent Democratic Vice President defend such positions in the Trump era; he appears constitutionally incapable of acknowledging that his ossified views on issues such as race and crime, while once amenable to a multiracial coalition of Democrats, are in terminal decline in the party.

Nothing is certain, but the presence of Harris, a black woman who directly benefited from busing, may prove too mighty a blow for Biden. He was clearly rattled by the suggestion that he had been anything other than a civil rights champion his entire political life.

As a whole, the Democratic candidates are not nearly as far to the left as many believe. But, as Joe Biden learned rather painfully, there are some issues where the center of the party has shifted firmly away from an older Democratic consensus that advised restraint and compromise in the culture war.

After watching the debates and reactions to them, I believe Democrats are not just looking for a candidate who will beat Trump; they are looking for someone who will totally reject the conservative social and cultural sensibilities that dominated American politics in previous decades. But that candidate may well opt for pragmatism over upheaval on the policy specifics.