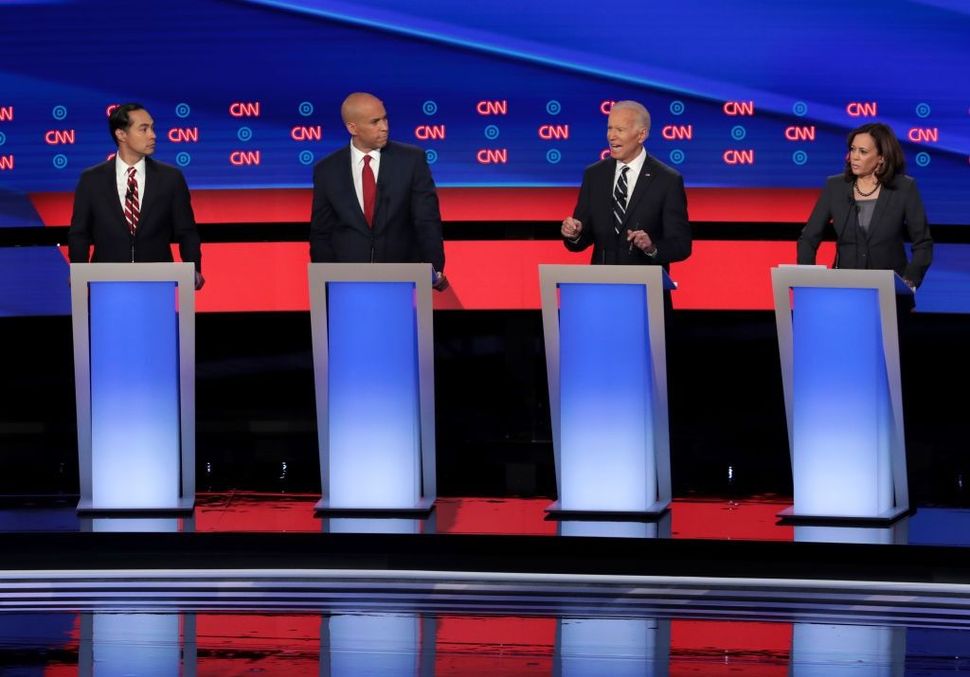 How do you have a world-viewed, prime-time presidential primary debate for a major political party in Detroit — and then just kind of gloss over Detroit?

You have Democrats lead it.

Two nights of sometimes contentious, sometimes fumbling debates between presidential wannabes yielded no honesty about the true state of things in Detroit. Candidates seemed afraid to step into the bowels of Motown’s nearly 35% poverty rate. With its median income of just $30,000, Detroit is a majority-Black city still swirling in a soup of socio-economic distress — like most majority-Black cities.

Voters in Michigan who want to hear that acknowledged and want to know what Democrats are going to do about it were sorely disappointed. It’s the same mistake Democrats made back in 2016, with their failure to inspire or motivate Black voters into the kind of mobilization that would have offset Trump’s chances of winning the state.

Ignoring the place they were literally standing was one of the most missed opportunities of this latest string of debates. It could have been a moment for Democrats to aggressively pitch their comprehensive plans for reviving urban American cities and, most importantly, the vulnerable people who live in them. President Trump himself provided the perfect excuse to so only days before, with his sustained tweet-driven attacks on Baltimore. But instead of offering up menus of coherent solutions to the dire conditions of some cities, candidates were more interested in lining up arguments to undermine other candidates, particularly front runners like Joe Biden.

What could have been a juicy and fruitful discussion that paints a vision of America post-Trump turned into a game-show-styled “match-up” void of any great ideas. The second night was worse, as it was all about “Get Joe.” Candidates were only interested in fulfilling headline and ratings expectations in a desperate bid to raise poll-standing and more money for future debate thresholds.

Detroit was the perfect backdrop to expose real poverty, racism and economic injustice for what it is. Instead, candidates couldn’t even get their health care proposals straight, way too much time was spent unpacking aspects of immigration that aren’t all that resonant with key Black voters watching.

The candidates assumed that all Black voters want to talk about is Reparations and criminal justice. But racism and inequality go so much deeper than that, especially economic racism. The discussion should have been intersected and thoughtful.

Instead, we got two nights of candidates finding ways to pluck low-tier candidates off stage or clever claps and snap-backs to dismount Biden. Bad enough the two nights were as segregated as they were – with the first night presenting an all-White line-up and the second night all the folks of color packed into the room. That already set a bad tone for the spectacle. Candidates “of color” should have been dispersed throughout the two nights and given a chance to mix it up.

Worse, the Democratic primary’s key voting bloc still missed out on a conversation with details about how to reverse their condition: Black unemployment rates are still high, there is an absence of Black small business growth in places like Detroit while Black children are still in highly segregated and woefully underfunded schools.

Violent crime rates are spiking suddenly in ways that are starting to draw lawmakers away from the criminal justice reform discussion. These are the crucial quality of life questions that aren’t getting the fresh highlights they need.

Instead, Black voters are getting type-cast. And Democratic frontrunners are getting away with simply mentioning buzz words like “Reparations” and phrasing like “’94 crime bill,” dusting hands off and checking a box.

The truth is, Black voters are not one to two issue ponies, and staying out of jail or getting paid for past enslavement is not all we’re interested in. There’s a yearning for a textured dialogue on how to reverse Republican-rule rollbacks on 50 years of progress and a plan for improving the Black condition. We also want to know, still, how these candidates plan to revive and protect our voting rights.

Top tier candidates like Biden, Kamala Harris and Bernie Sanders will only tip-toe around these issues — when they’re not so busy going after each other. This gave candidates like Elizabeth Warren moments to crack through it and resonate with those same voters on issues like wages and income inequality.

The overall two-night show was all gimmick and no substance. Democrats on stage have yet to show themselves as leading visionaries and seem, for the most part, comfortable with being just candidates. The policy proposals must be more than just talking points, and the debates should be expert discussions on how to fix America before it’s too late.