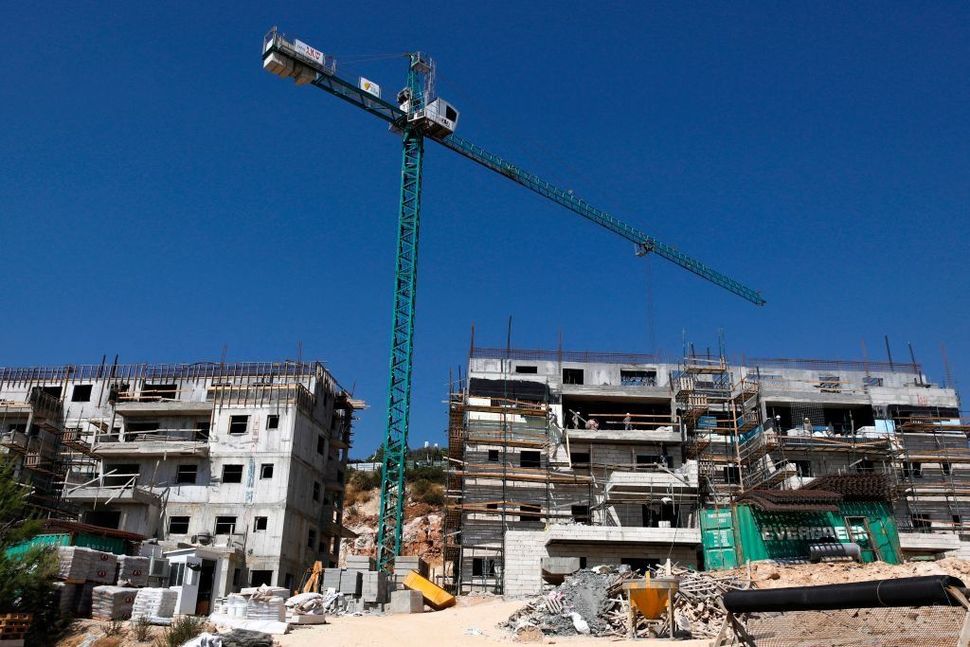 Construction on Palestinian homes in Israel. Image by Getty Images

We Israelis hear it all the time: Israel is a racist endeavor. It’s an Apartheid state. It’s a joke of a democracy. These claims are a mainstay of the movement to boycott Israel, and they are repeated like mantras at protests and on social media.

Well, haters, I hate to break it to you, but Israeli democracy isn’t just real; it’s thriving.

That was the lesson from last week’s election, Israel’s second in five months after Israeli Prime Minister Benjamin Netanyahu failed to form a coalition last time around.

In a surprise twist, Netanyahu’s Likud party lost thousands of votes in the redo election. Even more surprising, Arab voter turnout surged, making the Joint List, a combined list of four Arab parties, the third largest party in the Knesset.

After years of disaffection and alienation, and a refusal to vote on ideological grounds, Arab voters showed up demanding a seat at the table.

It’s wonderful. This is what a healthy democracy looks like: minorities showing up and demanding their fair share.

Not all Israelis will be equally thrilled by this. But here’s the thing: It’s not because they are Arabs. The problem is the ideology of some of the parties.

The Arab parties are extremely diverse in their political and ideological stances; they are made up of communists, socialists, feminists, Islamists, and Arab nationalists. But some are openly hostile to Israel — and to Israelis. Members of these parties have been caught smuggling cell phones to terrorists, visiting the families of terrorists, and praising these murderers of Israelis as “shahids” or martyrs. And this isn’t in the past, either. Just this morning on the radio, head of the Balad party Mtanes Shehadeh reiterated his support for BDS.

So it’s no wonder that many feel extreme apprehension at having terrorist supporters and people who oppose the Jewish State in the government.

I’ll tell you the truth: I’m scared, too. I’m scared to hope, scared to be wrong in hoping.

I’m scared they’ll seek to end the Jewishness of the state and work to make Israel one secular state next to a Palestinian State in a region surrounded by 27 Arab and Muslim nations. This is the stated intention of many who feel a true democracy can only be a secular one.

And yet, I am hopeful. The leader of this list, Ayman Odeh of the Hadash Party, has said all the right things. In a video in Hebrew, he spoke of Arab and Jewish cooperation, as he did in his New York Times op-ed explaining why the Arab parties broke from tradition and recommended Benny Gantz of Blue and White to form the government.

The only future for this country is a shared future, and there is no shared future without the full and equal participation of Arab Palestinian citizens.
https://t.co/1kcUbUcVsB

Of course, he could mean working together towards a secular non-Jewish State, which I oppose. I believe in a Jewish State. I believe the Jews deserve a home in their homeland where they will always be safe, welcome and able to defend themselves.

But I also believe that we can and must have a state where our minorities are content, secure and counted, having every individual opportunity and right that the Jewish majority enjoys.

It will take movement not only on the Israeli side, by ensuring budgets, police protection and investment into infrastructure — very reasonable demands of the Arab parties. It will also take movement on the side of Arab citizens, away from questions about identity politics and towards questions of dignity, as was suggested by Bassam Eid, a Palestinian activist who opposes BDS as it harms Palestinians and pushes for economic prosperity as the path towards peace.

The proof of what he says can be found not only in Odeh’s statements but in the NGOs who have quietly made headway in these areas. In East Jerusalem, where Arab residents have long been torn between where they live and how they identify, record numbers of Arab residents are signing up to learn Hebrew and slowly signing up to schools with an Israeli curriculum. This is a major shift, and matters because it represents an investment in the future instead of a clinging to the past.

Speaking Hebrew means employment. Using an Israeli curriculum with core subjects in schools means less hatred and violence, since a study found Palestinian school curriculum to contain a “dramatic amount of incitement and intolerance against Jews and Israel.”

According to the Institute for Zionist strategies, Israeli police have already linked summer Hebrew classes for Arab youth with fewer incidents of violence in the East Jerusalem neighborhoods where they were held. This coupled with the government investment into East Jerusalem, with two billion shekels pledged to education and infrastructure will ensure positive change.

And these changes can bring our respective communities together.

The fact that Netanyahu’s awful racist fear-mongering backfired proves that the majority of Israelis do not want to live in a country where our Arab citizens are our enemies. The fact that Otzma, the most extreme right Jewish party running in the elections, didn’t come close to the threshold puts the lie to the notion that Israelis on the whole are extremists.

Those abroad who truly want to see an end to this conflict — not just an end to Israel — would do well to accept this. It is time to understand that the people who live this conflict realize that our futures are linked. We must work together to create a reality where we can all prosper.

Israeli democracy is thriving. To ensure that it continues to do so, those of us who believe that we can be democratic and Jewish need to know that this democracy will not threaten the Jewishness of the state. For that we need an end to the BDS movement’s lies and incitement about Apartheid. We need to know that people accept the existence of a Jewish state in order for us to be able to make it the best it can be.