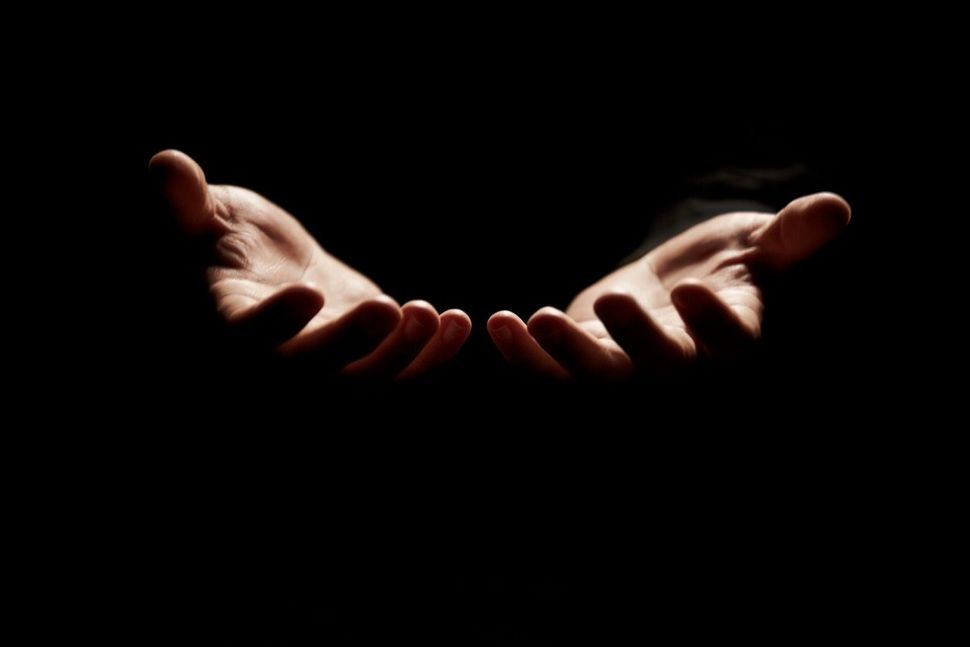 Palms turned up. Image by iStock

Here’s what I’ve learned this year. Apologizing is easy. Forgiveness is harder.

Nearly a year ago, our family home was broken into by a man with a knife. We’ve spent many months grappling with how, and if, our lives should change as a result. With the days of repentance approaching, my thoughts turn towards forgiveness.

But how can I forgive when I never got an apology? While I deeply desire offering forgiveness to my assailant, how can I do that when the one word I need to hear from him has yet to be forthcoming? How to get past this grave sin committed against me and my family when the sinner wont say the words?

I decided I had to say them for him.

I’m sorry. For the sin I’ve committed by entering your home.

So now, we lock our doors all the time. The key in my pocket a constant reminder. How I used to assume that anyone who bothered to trek up my long driveway had a good reason to be there. “Come in,” I would yell. “The door’s open.”

For the sin I’ve committed by threatening you.

“I’m gonna kill you.” I used to say that often. A throwaway line meaning stop bothering me, or, don’t remind me of my shortcomings, or, now I’m gonna have that song in my head all day! Now, when I hear it, I think, “Say what you mean.” Don’t give them so much power. Sometimes people really mean it when those words leave their mouth.

For the sin I’ve committed by beating you.

He hit me. Again and again. With picture frames he picked up off the table filled with photos of my own babies. I spoke softly, trying to calm him down, this man who yelled at me repeatedly to get out of “his” house. I hoped my children would know to hide. There was blood. I assumed it was from me. I hoped it was from me.

For the sin I’ve committed by locking you out of the house.

In a snowstorm. My children still inside with him. I screamed into my phone. I had silently dialed 911 as soon as I saw him, this stranger in my home. But it had been a long time, and still no one was in sight.

For the sin I’ve committed by standing in your son’s bedroom doorway, knife in hand, and telling him I was going to kill him.

And only now, a year later, he is learning to not be afraid in his own room. In his own bed that we picked out together when his crib got too small, the last of its four occupants who was in no rush to stop being the baby.

For the sin I’ve committed by chasing your husband behind a door, stabbing my knife straight through, no locks on those 110 year old slabs of wood.

He made us all more afraid. No longer having to wonder what we’d ever do “if.” I’m the only one with scars on the outside, and even my forty or so stitches are hidden beneath my thick curly hair, my bruises faded and healed. But inside, we all have new scars, and no thick hair, or pancake makeup, or well placed scarves, can hide them.

For the sin I’ve committed by causing brave police officers to be filled with doubt.

Because the 911 call didn’t make it to the local police for eleven minutes. And so we remained sitting ducks while an officer was only thirty seconds away. Call from a landline, I learned. I couldn’t have reached mine anyway. And for all that time, my children hid in a closet, and in a car, none of us knowing the fate of the others.

But there was good that came of this, or so I choose to tell myself. My entire family was deeply grateful that the police were able to capture him without firing a shot. We all spent time talking about what it means to have empathy for people with mental illness. Our primary emotion was not hate, or a desire for revenge, even as fear lapped at our heels. And we were thankful.

Thankful for the fact that we are all alive, and healthy, and safe. Thankful that when the police did finally arrive, in a few minutes it was over. And that those same cops shooed away the local news crews, and came by to check on us constantly, even as they, too, were managing their own anxiety.

We are thankful for our community — those who knew us and those who didn’t — who showered us with love, and flowers, and messages of support, and dinners, and scotch, and ice cream. Thankful that we live in Massachusetts, a state where it is so much more difficult to obtain a gun.

So I have decided that even though I’ve yet to get that ‘sorry’ I so crave, this season I will attempt to forgive. To let go of the resentment, and anger and frustration, and to focus on that thankfulness.

And to forgive those who don’t even know how to ask.

Leah Bieler is a writer with an M.A. in Talmud. She lives in Massachusetts.