Of Course Rabbis Should Preach Politics. Divorcing Religion From Politics Is A Christian Ideal. 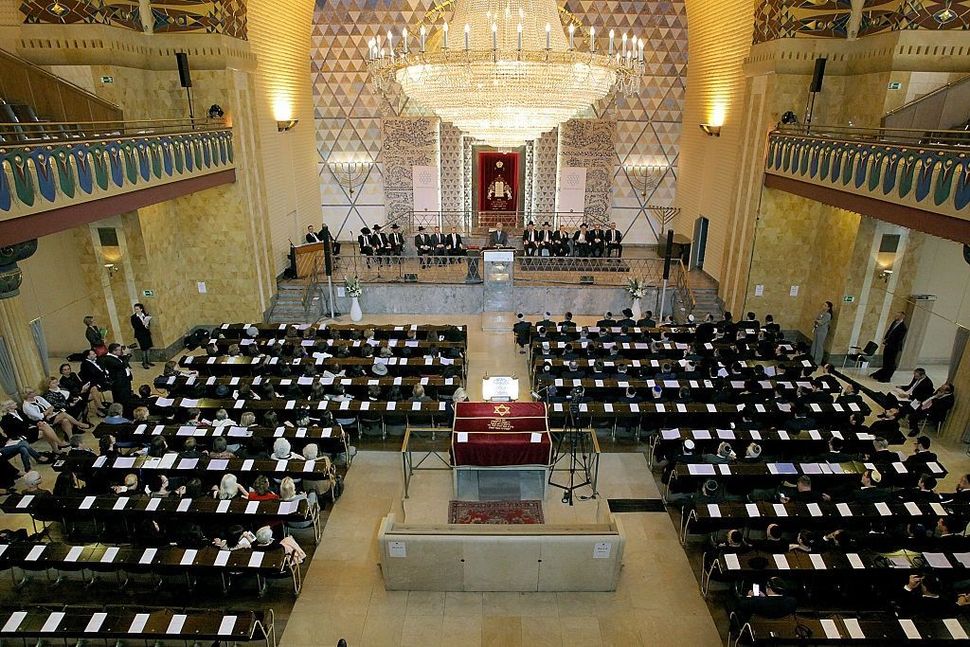 This time of year, during the High Holidays, there are a few things that non-Orthodox American Jews can reliably depend upon. In the days leading up to Yom Kippur, lots of us will complain about having to go without food for a day, and we’ll make jokes about Jews being the people “chosen to suffer.” We’ll complain about how gentiles insist on wishing us a “Happy Yom Kippur,” thereby clearly missing the entire point of the holiday. And we’ll debate innumerable columns fretting about whether rabbis should talk politics during their High Holiday sermons.

This isn’t a new debate, of course. It predates our current political moment. Debates over Jewish politics during the High Holidays were just as heated — if not more so — in the nineteenth century. On Rosh Hashanah in 1850, the police had to break up a fistfight on the bimah of Rabbi Isaac Mayer Wise’s Albany synagogue, the culmination of a dispute over whether American Jews should continue to believe in a messianic return to the Land of Zion, or whether such messianic beliefs undermined the American Jewish commitment to their new American home and emboldened anti-Semites claiming Jews could never truly be Americans.

And in 1870, the German Jewish community was wracked by a debate over whether to use the occasion of Yom Kippur to publish images of Jewish soldiers celebrating their holiday while fighting for Prussia in the Franco-Prussian War, in order to promote an image of Jews as loyal German citizens and so make a case for Jewish emancipation in Germany, or whether that would merely cheapen such a solemn day and take it away from its original meaning.

The Jewish Labour Bund in Vilna even famously held their annual banquet on the night of Kol Nidre, an act that would certainly be derided as “trolling” if a Jewish group did it today.

So the debate over whether to talk politics during the High Holidays is not a new one. But in the age of Trump and the resurgent far-right, when the Prime Minister of Israel cozies up to the global far-right even while far-right violence against Jews is on the rise in the U.S. and across Europe, the debate feels particularly fraught. As a result, it can be tempting to argue for rabbis to stay away from politics entirely. Whichever political stance a rabbi takes, whether left or right, it is going to alienate some congregants, the argument goes, so it’s better to stay away from politics entirely.

I understand the appeal of the argument, especially at a time like this. But it would be a grave mistake for rabbis to stay away from politics during the High Holidays, this year and any year. Because the truth is, staying away from politics has never been Jewish tradition; it’s a Christian one.

The idea that “religion” and “politics” reflect separate spheres of human cultural experience that can be kept separate and discrete reflects the Christian legacy of the West, and is foreign to Jewish culture. If rabbis decide not to talk politics during the High Holidays, they will be accepting a tacitly Christian view of what “politics” even is — which is surely a statement as political in itself as any sermon about climate change or impeachment could ever be.

Allow me to explain. There is famously no word in Biblical Hebrew that means “religion” in the modern sense of the term. The word that is used to denote the concept of “religion” in Modern Hebrew, dat, is more accurately translated in the Hebrew Bible as “law” or “sentence,” in the juridical sense.

This of course makes perfect sense, given that in the cultures described in the Hebrew Bible, the rituals and practices which we might now label as “religion” were intimately connected to the laws and guidelines used to govern the land politically; it thus made no sense to speak of “religion” as a sphere of human life separate from the political. Even after the destruction of the Second Temple and the ensuing exile from Judea limited the scope for Jewish authorities to govern their communities politically as well as ritually, rabbinic sources continued to speak of the ideal Jewish authority as one that draws no boundary around the “religious” elements of society as distinct from the political and the economic, such that Rabbi Judah states in the Babylonian Talmud that a king would be the ideal form of Jewish government, an opinion later echoed by Maimonides.

In the Middle Ages, when Jewish communities were permitted to exercise some limited degree of governing autonomy, ritual considerations that would be considered “religious” in a modern sense were expressly used to compel actions that we would nowadays consider “political” acts; for example, if a male individual refused to pay taxes or fair wages owed to his employees, he risked not being permitted to be counted as part of a minyan in synagogue.

In short, there was no need for a word to designate “religion” for most of Jewish history, because there was no discrete sphere of human experience denoted by this word, separate from the rest of an individual’s daily life and political experience. In fact, the term “religion” itself was in many ways an invention of Christianity, and specifically of a form of Protestantism which, in the words of anthropologist Talal Asad, “emphasizes the priority of belief as a state of mind rather than as constituting activity in the world.” The idea that there can be a split between the religious and the political spheres of life, that “religion” is something that one does in the privacy of one’s home and place of worship that remains separate from one’s political life in the country at large, is premised upon an implicitly Christian notion of what “religion” is in the first place.

As Jewish scholar Gil Anidjar writes, Christianity “divided itself into private and public, politics and economics, indeed, religious and secular.” By placing the greatest emphasis on one’s internal life of private belief, rather that one’s behavior in the world at large, with all the political, social, and economic dimensions that being in the world implies, “Christianity invented the distinction between religious and secular and thus made religion.”

And now there are American Jews who, in the name of preserving some degree of communal harmony during the High Holidays, want to accept this Christian distinction between the internal life of religious belief and the external life of politics. These people would have us go to synagogue during the High Holidays to talk about our personal beliefs about God, about the people of Israel, about atonement, and then have us go out into the world as American citizens who must cast votes and participate in the political system, and keep these spheres separate. We should be Jews in one world and American citizens in another. But such a notion of separation and division is itself a Christian legacy. It isn’t coincidental that the notion of separation of church and state evolved in Christian countries, and that the sole Jewish modern nation-state explicitly lacks such separation.

Of course, believing that Jewish history teaches us that our ritual practices impose value judgments about how to live in society with others, value judgments which are necessarily political, does not mean that all Jews have to agree with one another in our politics.

Far from it. In fact, our tradition values discussion and debate, and much of the Talmud consists of debates and dialogues among rabbis about how to live in society as a Jew in the new political condition of exile. As American Jews living in our own exile, we can reclaim this tradition of respectful argumentation and textual study at a time when we need it more than ever.

But this High Holiday season, let’s not try to emulate Christians by assuming that our religion can be kept separate from our politics, that we can possibly live in a nation governed by Donald Trump without that fact bearing on who we are in synagogue and in the rest of our lives as American Jews. Let’s not claim that Judaism can ever be non-political.

We just finished a year when we were accused by our own president of being disloyal. Let’s enter 5780 and be proud of our disloyalty to Christian political institutions, proud of our difference. And let’s understand that, at a time when anti-Semitic attacks are on the rise all across the Diaspora, being a Jew in exile is itself a political statement.

Joel Swanson is a Ph.D. student at the University of Chicago, studying modern Jewish intellectual history and the philosophy of religions. He refuses to identify as either a “religious” or a “secular” Jew, because he believes that the binary division between religion and secularism is an invention of Christianity. Find him on Twitter at @jh_swanson.

Of Course Rabbis Should Preach Politics. Divorcing Religion From Politics Is A Christian Ideal.