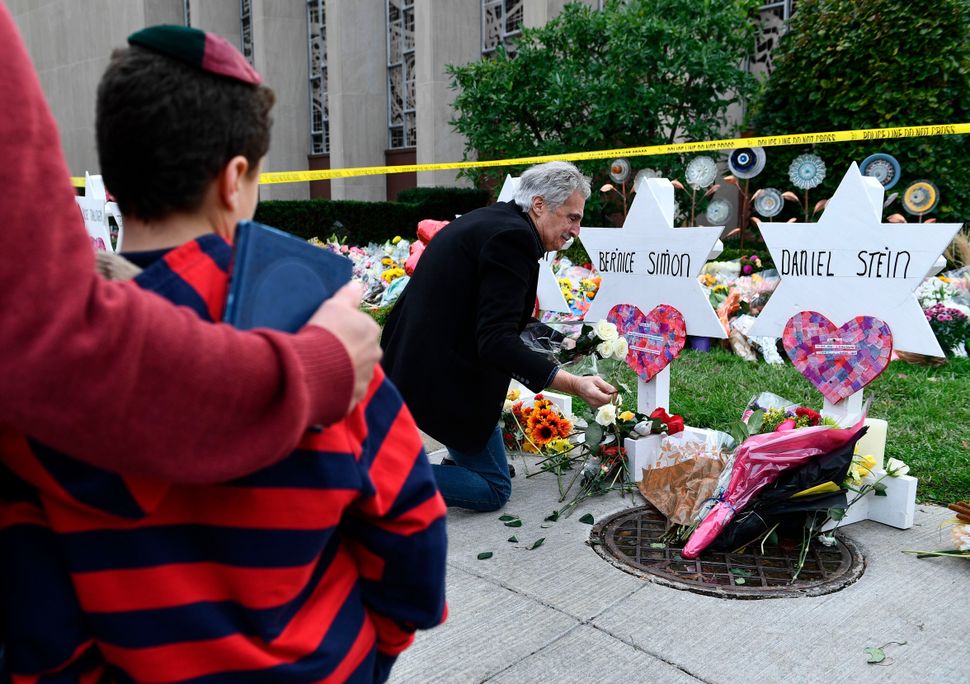 “Open you Eyes! It’s the filthy EVIL jews Bringing the Filthy EVIL Muslims into the Country!!”

These words were distributed on social media by Robert Bowers, the man who would turn his hatred into reality when he forced his way into the Tree of Life synagogue on Shabbat one year ago and murdered 11 Jews.

A year later, his words and the ideas behind them still ring in my ears.

In the days and weeks after the attack, while a community sat shiva and Jews around the country took to synagogues, the streets, and the press to sound the alarm and reaffirm our place in this society, other conversations, in hushed tones, occurred behind closed doors: Is it happening here? Anti-Semitism in America? Or was the murderer just one lonely and crazy guy?

It was tempting to dismiss him. Look at the poor grammar and the even worse ideas. HIAS, a Jewish refugee resettlement agency, is engaged in a conspiracy to turn America brown? Surely nobody believes these bobe mayses.

But with Poway now also a part of our consciousness and words like atomwaffen now a part of our lexicon, no longer can anyone argue in good faith that the anti-Semitism espoused by the shooter at Tree of Life was isolated to one violently bad apple. The shooter’s hatred is part of a larger set of far-right anti-Semitic beliefs and ideas finding followers in America.

This may all feel novel. But there is nothing new about this anti-Semitism.

In 1933, the celebrated Anglo-American poet T.S. Eliot gave a series of lectures at the University of Virginia which he later compiled and published under the title “After Strange Gods”. Eliot earnestly spoke in favor of a traditional society, which he defined as the habits, customs, and norms of “the same people living in the same place.” In Eliot’s telling, the ideal society was a racially and religiously homogeneous one. This meant there was no place for Jews:

“What is still more important [than cultural homogeneity] is unity of religious background, and reasons of race and religion combine to make any large number of free-thinking Jews undesirable.”

Did you expect to see Jews so plainly targeted and framed as a threat to a “traditional society” by a prominent poet? Eliot, who harbored reactionary beliefs, and the Tree of Life shooter, are generations apart. They expressed themselves with differing degrees of sophistication. Yet they still reached the same conclusion: A white Christian society is good and natural, and Jews are a threat to it.

Why the Jews? you may be wondering. Eliot may have taken a dim view of the massive wave of Jewish immigration that transformed New York City a century ago, but to hear it today from those committed to a project of social engineering to make America uniformly white and Christian, all the problems began when Blacks fought for and won civil rights, women fought for equality, and America opened its doors to (non-white) immigrants from all corners of the globe.

The “traditional society” in this telling featured what should now be a familiar theme: a homogenous white Christian society. The white man was the breadwinner, the wife stayed at home with the kids, and everybody you knew was at church on Sunday.

How could they willingly give up their status, their family structure, and their community to a bunch of inferiors like Blacks, feminists, and foreigners? Those groups couldn’t destroy this “traditional society” on their own, the anti-Semite believes. No, they needed help from within. A conniving group which could go undetected among whites to control entertainment, the press, and the government.

It will not surprise you to learn that the modern and very online incarnation of this worldview, the alt-right, as part of their efforts to raise white racial consciousness, speak of “white genocide” and mark white-presenting Jewish journalists with an (((echo))) tag.

Anti-Semitism in this telling then is not just one hatred among many but the unifying belief system which unites them all.

What then is a Jew to do in the face of violent antisemitism such as the kind visited upon Pittsburgh? Should she despair? Perhaps give Nefesh B’ Nefesh a call?

In the wake of the tragedy at Tree of Life, Jews found a model of what to do in the tens of thousands of Jews mobilized by their grief: Show that Jews will not be scared away from our synagogues, that we are just as American as anyone else, that we have allies in the struggle against white supremacy, and that we will fight for the diverse, tolerant, and just society that anti-Semites abhor — for Jews and for every other marginalized group.

The Forward is collecting real stories about living with anti-Semitism from readers, in response to the AJC survey. Add yours here.

Alex Zeldin is New York-based writer. You can find him on Twitter at @JewishWonk.