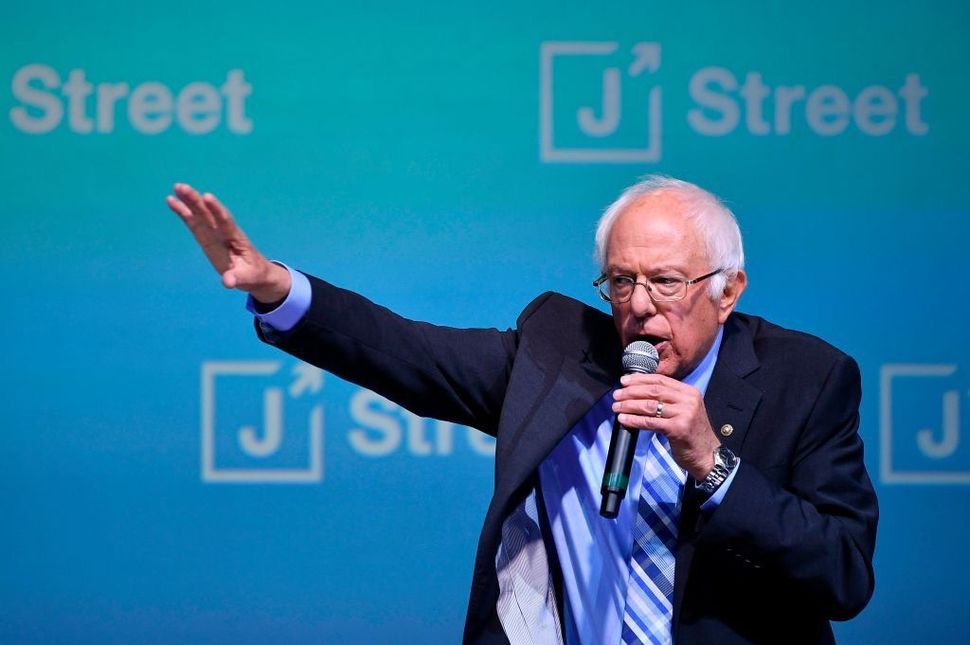 The 2019 J Street Conference, held last week in Washington, was the first time in recent memory that the Israeli-Palestinian conflict was openly discussed and critically assessed in the mainstream American public sphere.

Historically, presidential candidates on both sides of the political spectrum have been deaf to Palestinian grievances, blind to Israel’s injustices and defensive of Israel’s transgressions. In the 2016 race, for example, Donald Trump and Hillary Clinton seemed to be engaged in a competition over who could be friendlier to Israel and harsher on the Palestinians.

It was not an unusual situation in American political life. In fact, back then, it was unthinkable for a presidential candidate to break the taboo of openly criticizing Israel and showing sympathy toward the Palestinians, instead of asserting blind commitment to Israel.

But this year, several Democratic presidential candidates actually debated serious action — including leveraging US military aid to Israel — to end the ongoing destruction of the peace process.

My eyes filled with tears as I watched Bernie Sanders demand that Israel “fundamentally change [its] relationship to the people of Gaza,” my home.

Then he went even went further, calling for a redistribution of some of the annual $3.8 billion that Israel receives in aid — to Gaza. His statement made headlines around the world, and revived hope among despairing Palestinians. A US presidential candidate showing genuine care for both sides of the conflict, rather than paying lip service to the topic in general and obscure terms, was a powerful gesture.

Pete Buttigieg and Elizbeth Warren also discussed leveraging US aid to Israel, though their language was more cautious and diplomatic. And despite bringing up aid, their remarks felt more like plans to maintain the status quo, rather than to introduce real change. And with annexation of the West Bank becoming more and more of a reality every day, Buttigieg and Warren’s plans are simply not enough.

For in truth, Israel is already engaged in de facto annexation. To suggest as Buttigieg and Warren did that extreme action is only necessary should Israel turn that de facto annexation into de jure annextion will do far too little for the Palestinian lives that are already under the thumb of COGAT policies, IDF brutality, and state-sanctioned settler expansion, plunder and violence.

Critics will undoubtedly continue to characterize Sanders’s pledge as a long shot that would endanger Israel’s security. But his plan, making aid contingent on advancing the two-state solution, is not only morally urgent; it can in fact be undertaken without causing damage to Israel, or to US-Israel relations.

Sanders clearly understands that the problem is the “inhumane, unacceptable and unsustainable” status quo, which takes a toll on both Israeli and Palestinian lives. The current blockade of Gaza perpetuates a vicious circle of hate and violence on both sides of the fence, that could go from bad to untenable in a matter of months. The changes we need are urgent.

Sanders’s position uniquely reflects compassion and solidarity with Gaza — something that is critically needed, yet virtually unseen amongst the other Democratic candidates. But he also expressed a desire to make Gaza more livable, a message which demonstrates great care for Israeli lives as well; this care comes from a deep understanding that the blockade disempowers everyone except militants and proponents of violence.

It is imperative that any future US president should immediately use all the leverage at hand to reverse the damage done to the blockaded Gaza Strip; an unlivable Gaza is a recipe for chaos and disaster. To save Israeli lives, restore hope and life to Gaza. Give its people something worth living for, instead of hammering them and squeezing them to the edge of despair, where some will inevitably choose to challenge their slow death with violence.

Maintaining the current, unconditional flow of billions of dollars in aid to Israel will only embolden Israel’s most dogmatic and fundamentalist leaders to keep pushing towards a worse reality. It would be an unforgivable betrayal of all parties trapped in the Israeli-Palestinian conflict if the country with the greatest capacity to challenge the status quo stands idly by, and even subsidizes and fuels the apparatus of oppression and injustice.

A massive shift, like that proposed by Sanders, is long overdue to create momentum and change. All it takes is prioritizing courage over expediency and reason over talking points and political calculations.