Stop Calling Violent Settlers Bad Apples. They Are The Inevitable Outcome Of Occupation. 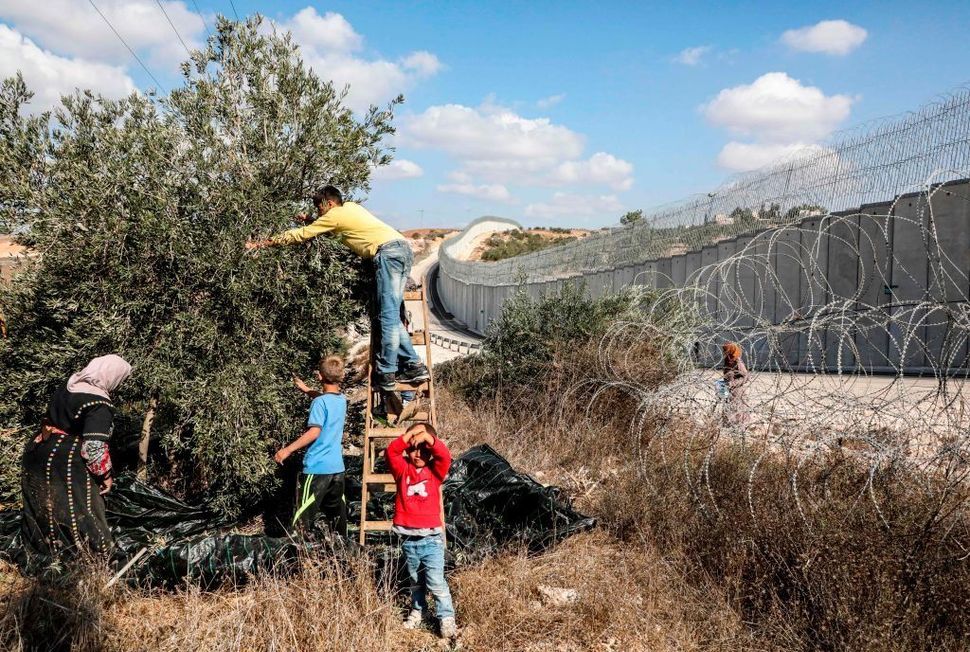 When video surfaced earlier this month of settlers throwing stones at Palestinians while Israeli soldiers looked on, I was not surprised. From 2013 to 2015, I was a sergeant in the operations room of Israel’s Civil Administration in the Palestinian Territories stationed in the Nablus region, so I know that the violent tactics of land-grabs by settlers in the West Bank, and the blind eye turned by the Israeli authorities, are nothing new.

On Saturday, at around 4:25pm, 5 settlers, accompanied with 2 soldiers, came from Givat Ronen outpost and threw stones at a Palestinian family from Burin, a village near Nablus, while they were harvesting olives from their plot of land.
Video captured by @YeshDin field researcher pic.twitter.com/Esa1TSe5K7

Throughout hundreds of twelve-hour shifts, I came in contact with most bureaucratic aspects of the military control over Palestinians. But what I remember most is the violence of extremist settlers, their defiance of the law, and the intrinsic inability of the military to do anything about it.

I received dozens of reports from frantic Palestinians about violence from Israeli settlers; a farmer in Deir Sharaf awaking at sunrise to more than 100 young olive trees destroyed before having the chance to bear fruit; a 14-year-old Palestinian boy who was abducted and abused by settlers, and later abandoned in a field nearby the settlement of Bracha.

I remember one Saturday morning when a group of settlers destroyed water tanks of USAID in Madama, smashing the security cameras guarding the site; in the videos I saw later, the settlers can be seen wearing white dress shirts, kippot and tzizit.

Another time, a family man from Burin reported two molotov cocktails thrown at his house while he was putting his children to sleep.

In not one of these occasions was a settler arrested as part of the initial investigation.

That’s why I wasn’t surprised by the video, or by the news of the series of violent events in the settlement of Yitzhar last month, in which Jewish volunteers assisting Palestinians harvesting their olive trees in the village of Burin were attacked by settlers. In the following days, IDF soldiers guarding the area were attacked as well, including a battalion commander.

Yitzhar, an infamous extremist settlement in the north of the West Bank, has been a source of violence toward neighboring Palestinian villages for years. This is old news.

What was news this time was that the victims of the first wave of violence in the Burin olive harvest were not only Palestinians, but Jewish American and Jewish volunteers who had come to assist the olive harvest. They came for a very specific reason: to put their bodies on the line in case of a violent attack against the farmers. The harm that befell them, rather than Palestinians, is presumably why the incident was even reported in the first place.

It seems to suit everyone fine. Many in Israel and even in the Jewish Diaspora would prefer to see settler violence and terrorism as rare aberrations, as extreme cases. They would prefer for such incidents to be reported, if at all, on page 12, as was the case when the Israeli paper Yediot Aharonot covered the incident at Burin in the following day’s paper; the headline in Yediot reporting the violent attack read, “Rabbis for Human rights activist claims: ‘I was beaten by Yitzhar residents.’ In Yizhar, they deny the claims as mere provocations of left-wingers.”

Apparently Yediot thinks this is a valid view. And they were not alone. In the days that followed, right-wing Facebook pages and Twitter handles were force-feeding the message that the alleged attack was “fake news.” Others went so far as to call it a “blood-libel” against Yitzhar residents. Many in the right-wing worked tirelessly to frame the incident as a conspiracy. Ironically, most cases of violence and vandalism that Palestinians have reported about are not even worthy of becoming a controversy.

A day after the attack on the Jewish volunteers, the Palestinian farmers received a closed-military-zone order, preventing them from harvesting. A day later, the settlers pelted soldiers with stones, and since then, mounting reports of violence against military personnel surfaced.

Now that the victims were IDF soldiers and officers, the story could no longer be refuted and deemed fake news. Center and right-wing politicians who were silent the week prior, condemned the violence against IDF personnel but chose their words carefully. They condemned the attack of soldiers, though not the attack of human rights activists or Palestinians. They did not call the stone throwers terrorists as they would if they were Palestinian, but rather “troubled youth.” They did not exclaim that “stones kill” nor did they support shooting at them with live ammunition as many of them support when the throwers are Palestinians.

Why does the military tolerate such humiliation and harm to its troops, by those whom they are sent to protect, instead of effectively enforcing law?

In the West Bank, the legal premise is that Palestinians and settlers are not equal before the law. Palestinians are subject to military law while settlers enjoy full civil rights as if they were living in Israel.

But there’s a deeper reason: The establishment in Israel is so stuck on portraying the Palestinians as enemies and the settlers as blood-brothers that the military’s set mission to protect all inhabitants of the territory evolves into a mission of oppressing the former, and providing immunity to the latter.

This reality is described in countless testimonies given to the Israeli non-profit, Breaking the Silence. As a Nahal brigade soldier testified about his time in Yitzhar back in 2014, “If an Arab were to come and do those things, I know very well what I can do. I can arrest him, I can throw stun grenades or tear gas at him. When it’s a Jewish person doing this, what I can do is just stand there, wait for the police, for the border police, absolutely helpless, and after that, I’m supposed to protect him.”

Soldiers standing idly by as settlers pelt stones are not at fault, just as the violent settlers aren’t “rotten apples” as they are often depicted. According to Israeli human rights group Yesh Din, only 7% of case files regarding violence of settlers against Palestinians in the West Bank lead to convictions, and only 8.1% of the cases that Yesh Din followed to their closing, led to indictments.

This is the expected and inevitable outcome of a separatist regime, in theory and in practice, that has existed in the occupied territories for over five decades. Jews of all affiliations in the Diaspora, especially in the US, must rise to the challenge, overcome false reporting and condemn what Israeli right-wing politicians are trying to hide, and what progressive Israelis are trying to fight — an ever expanding Jewish supremacist regime outside Israel’s sovereign borders.

Frima Merphie Bubis, served in the IDF between 2013 till 2015, in the West Bank’s Civil Administration. She joined Breaking the Silence in 2016 to manage the Jewish Diaspora outreach of the organization. She is currently studying at Tel Aviv University.

Stop Calling Violent Settlers Bad Apples. They Are The Inevitable Outcome Of Occupation.