Israel Is Finally Fed Up With Bibi, The Perpetual Victim 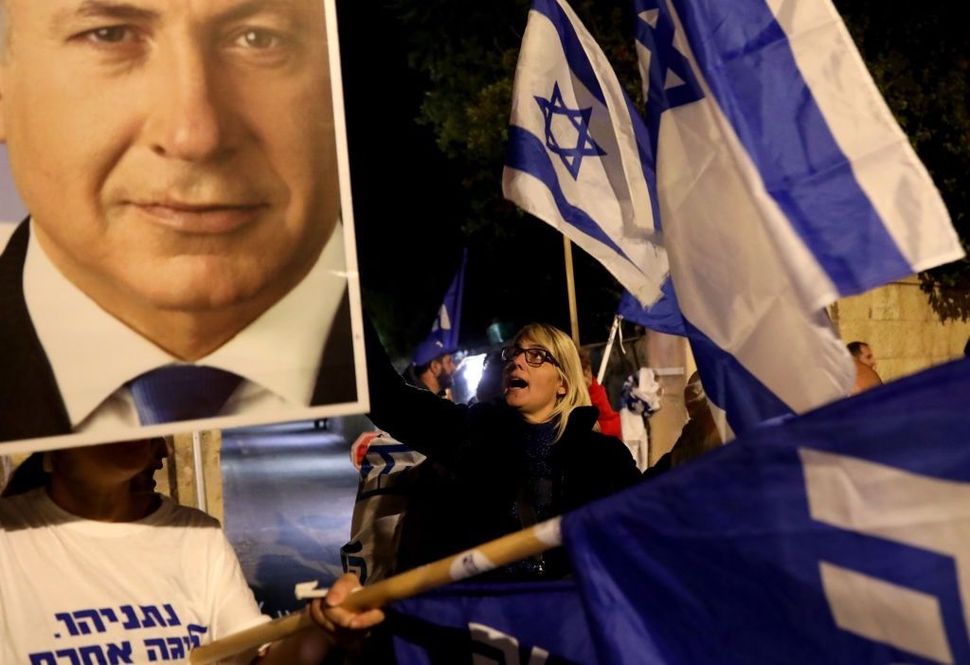 Supporters of Israeli Prime Minister Benjamin Netanyahu chant slogans as they demonstrate their solidarity with him outside his official residency in Jerusalem on November 21, 2019. Image by Getty Images

Israeli Prime Minister Benjamin Netanyahu was quick to define the indictments handed down against him last week. “Tonight we are witnessing an attempted coup,” he said soon after the announcement that he would be indicted on charges of bribery, fraud and breach of trust.

Netanyahu’s supporters heard him loud and clear; a demonstration is planned in Tel Aviv under the banner “Stop the Coup.” To Netanyahu and his followers, Israel is witnessing an abject, reprehensible cabal to persecute, then prosecute, then depose the Prime Minister.

This eleventh hour plot twist meant Netanyahu would have to create a new narrative. After all, he’d spent three years with a supercilious smirk plastered on his face, insisting that “there won’t be anything because there never was anything.” Now that there are three somethings, a new attitude was in order. Thus, within an hour of Attorney General Avichai Mandelblit’s statement, Mr. Netanyahu metamorphosed from Louis XIV to Alfred Dreyfus; from a man who profoundly and irrefutably believes he is Israel and Israel is him, convinced he is Israel’s providence-sent Lord Protector without whom it faces imminent existential danger, Netanyahu mutated into the victim of a vast political and legal conspiracy.

Fifty-five minutes after an austere Mandelblit delivered his concise but cogent decision, a visibly shaken Netanyahu stood behind a podium, flags behind him, and launched a tirade of bitter lamentations against the entire world. A dejected Netanyahu whined about the “deep state,” composing in situ his own version of Émile Zola’a J’Accuse article defending Dreyfus in 1898. Netanyahu’s version, though, was a total reversal of the indictment: Instead of “The State of Israel Versus Benjamin Netanyahu” it was “Prime Minister Benjamin Netanyahu against The State of Israel.” Mr. Netanyahu was accusing the republic of conspiring against him.

It was an astounding spectacle of a man so confounded by reality that he essentially declared war on his own country; Netanyahu is now a prime minister who is waging a scorched-earth campaign against Israeli democracy and its legal system, defaming and criminalizing law enforcement and political rivals.

The leader of a powerful, rich and successful state is now spewing anger and resentment toward it. And he is alone in Israel’s leaders to do so: David Ben Gurion resigned; Golda Meir resigned; Yitzhak Rabin resigned; Menachem Begin resigned. Former Prime Minister Ehud Olmert resigned amid an investigation for which he was later tried, convicted and jailed. But Netanyahu? No way. What would be of Israel without him?

It’s not the only way in which he stands outside of the company he should be in. As a former Israeli Prime Minister who knows Netanyahu well told me, “In the end, and maybe right from the very beginning, he was not one of us.”

“What exactly do you mean by that?” I asked.

“Don’t just look at his biography,” he explained. “Look at his mindset, his values, his modus operandi. He is a dark, pessimistic, frightened, anxious diaspora Jew who behaves as if he doesn’t know or totally fails to appreciate how strong Israel really is.”

There’s something essentially diasporic in Netanyahu’s view of Israel. “This is the core of his personality,” the former Prime Minister went on. “In his heart and mind, he is an American; his preferred language is English, not Hebrew.” But he doesn’t fit America, either. “He hates liberal American Jews just as much as he hates the ‘leftist’ founders of the State of Israel,” he said. “Go figure.”

Last Thursday marked the end of the Netanyahu era. It may drag on for weeks or even months due to constitutional issues regarding whether he can stay in office or re-seek it. He may propel the country into another election in March, just to extend his tenure while hoping for parliamentary immunity or negotiating a plea bargain that would help him avoid trial.

But his era is over. Love him or hate him, he’s now on political fumes, not gas. Across Israel, fatigue has set in, a cloud of jadedness and a broad apathetic notion of “enough is enough.”

Yes, he has his base support, both a genuine base and a band of cultists. Yes, he has a vociferous chorus of sycophants willing to parrot every “deep state” conspiracy theories he concocts. But even they must know that this show in on borrowed time.

Historians and political scientists will debate Netanyahu’s tenure and legacy. Some will be favorable and view him as a balanced, stable and risk-averse prime minister who was at the helm during a prosperous and relatively secure decade to which he contributed. Others will judge him harshly and paint a picture of an incendiary and destructive populist who dismembered Israeli society and left behind a toxic and divided country.

His record on Iran, the Palestinian issue and relations with US Presidents and Congress, and his tenuous relations with American Jewry will all be debated.

But in the end, hero to many, villain to many, divisive to all, he did it his way — the way of the victim.

Alon Pinkas is the former Consul General in New York, and has served as Chief of Staff to four Israeli Foreign Ministers.

Israel Is Finally Fed Up With Bibi, The Perpetual Victim