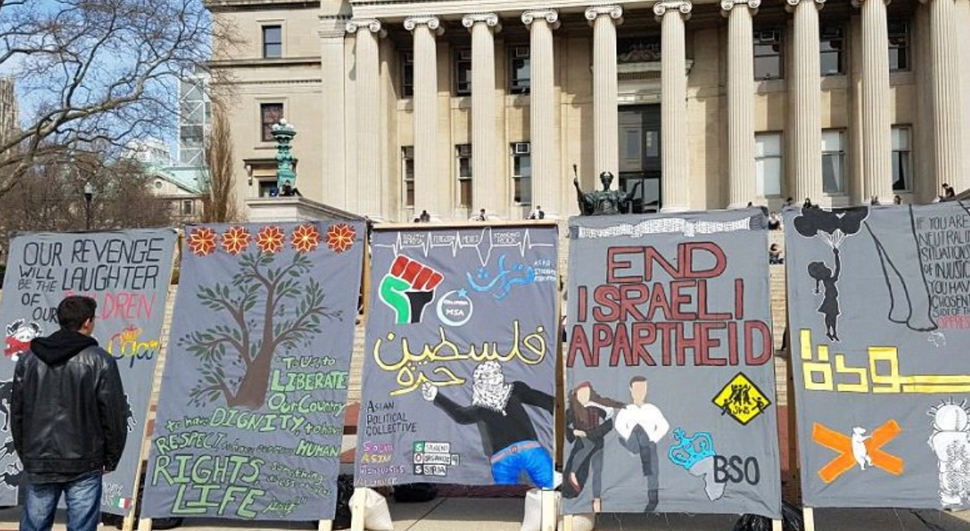 In retrospect, the pattern of antagonism towards Jews and Israel that became visible at Columbia University in the early 2000s and was documented in the film Columbia Unbecoming wasn’t the worst expression of hostility; it was merely the first one to attract attention to an essential truth: On college campuses, Israelis and Jews who support Israel are not peers, they’re prey.

This week, Columbia is in the news again. This past Sunday, the fight against anti-Semitism masquerading as anti-Zionism suffered yet another setback. The Columbia College Student Council, after two previous attempts, yielded in a 25-12 to allow a vote to go forward on a Boycott, Divestment, Sanctions referendum.

This development follows on the heels of Barnard College’s March 2018 plebiscite that directed that school’s student government to draft a letter of support for BDS to its university administration.

In an age when the assault on Jewish students is a fundamental feature of campus life and a core element of the anti-Zionist Left, it’s easy to become numb; it’s just another vote by undergraduates signaling nothing more than their own sense of virtue. BDS is just symbolic, we are told, or we are reminded that it has no effect on Israel’s economy.

Some who suffer from a peculiar visual condition that only allows for the perception of single sourced anti-Semitism are quick to insist that only white nationalist violence qualifies. For these voices, BDS is at worst a sideshow and at best a noble effort. They see the organizational Jewish world’s focus on BDS as hiding the ball in an age of synagogue shootings, and howl at anyone who dares assert that anti-Semitism has many faces.

These responses are wrong. The stepwise assault on Israel is inextricably tied to the creation of a hostile environment for Jewish students who have the temerity to insist that Israel not be singled out for singular opprobrium.

This was a gang-attack, undertaken by what the Columbia Spectator describes as “the many intersectional identities that are impacted by Israeli occupation,” a phrase both nonsensical and disturbing.

The iron fist of this discrimination is cloaked in the velvet glove of social justice cant and progressive mumbo-jumbo; a proponent of the resolution, representing both Students for Justice in Palestine and the South Asian Feminisms Alliance explained, “Just as our oppression is interconnected, so is our solidarity with one another.”

In that same article in The Spectator, a student leader affiliated with the Jewish community responded to the vote by saying, “We don’t want [conversations] to be had through this oversimplified question on this incredibly complex issue. We want to be having events, we want to be having debates.”

With all due respect, we strenuously object to this approach. It is unconvincing and likely to produce future setbacks.

The issue is not “incredibly complex;” it is shockingly simple. The campus left has turned on Israel, decisively. Jews are somewhere between the intended victim and collateral damage of this stance of aggression.

The answer to an act of intellectual assault is not to hold “debates,” but to loudly name the hate directed at you, deny it the legitimacy it seeks, and respond with pride and conviction in Israel and Zionism, the constellations of ideas and commitments that underwrite Israel’s brave history and bright future. Enough with the rote invocation of complexity.

This is a fight, and Jews who are proud of who they are must start treating it as such. All tactics need to be on the table.

Jewish organizations should immediately cease holding or sponsoring events with groups that support BDS resolutions, as the Black Students Organization and Native American Council did here.

Jewish university trustees must unconditionally express that their support is conditional on universities not becoming staging grounds for modern day Passion plays, with Israel as the new/old Jew. And most important of all, Jewish undergraduates need to realize that through no fault of their own, the benefit of the doubt is something they cannot and must not extend.

Ari Hoffman is a writer and lawyer who holds a Ph.D. from Harvard and a J.D. from Stanford.

Johnny Harounoff is a graduate of Columbia Journalism School, a former CAMERA Fellow, and an alumnus of the universities of Cambridge and Harvard.