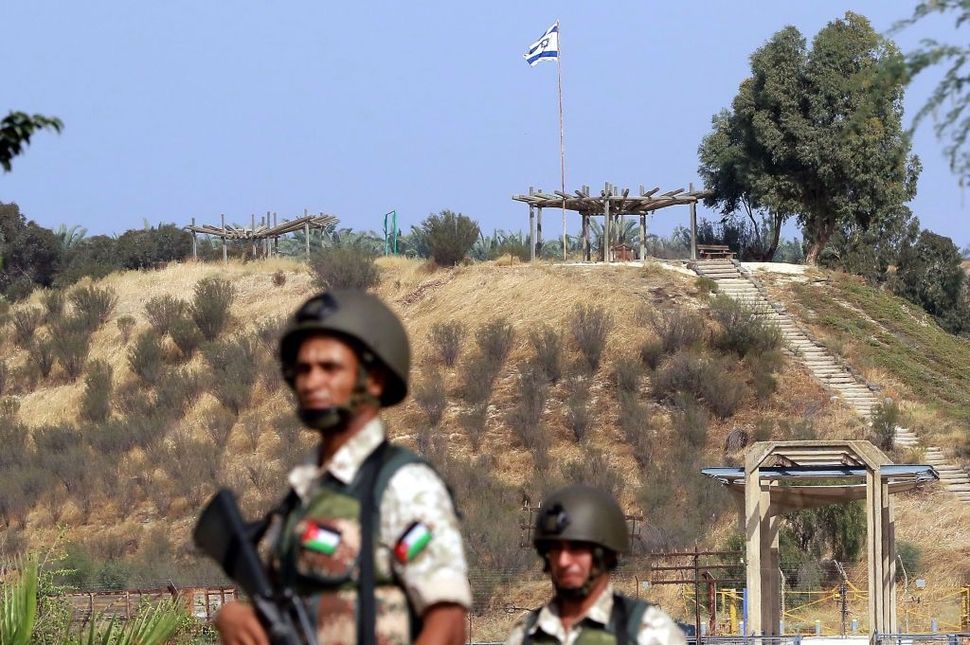 Jordanian soldiers stand guard near the “Gate of Peace” at the Jordan Valley site of Baqura, east of the Jordan River, on November 13, 2019, with the Israeli flag flying over the Israeli side of the border. Image by Getty Images

Netanyahu’s latest focus on annexing the valley is a transparent political ploy to stay in power and pressure Gantz to accept a unity government. In the process, he is building political support for the argument that Israel must annex the Jordan River Valley because of security concerns.

It would be a huge mistake for Israel to go down this path and for the United States to support it. Annexing this territory, which makes up 22.3% of the West Bank, would amount to Israeli territory entirely enveloping any future Palestinian state, making it non-viable. Annexing the Jordan Valley would also take away some of the most economically valuable land which is widely regarded as necessary to build a future state of Palestine.

But even more importantly, the strategic logic behind holding onto the valley, which was developed in the years after 1967, no longer holds: Today, Israel can remain entirely secure while allowing the valley to become part of a future Palestinian state.

The Jordan Valley is not precisely defined. But the area Netanyahu has talked about annexing goes from the Jordan River to the start of the Judaean Hills. The rationale for keeping this areas is that the IDF could then maintain a permanent presence on high ground; if there was ever a major military invasion from the east, for example, Israel could hold the high ground and repel any invader.

This thinking is outdated. The only force that could seriously threaten Israel with such an attack would be a major army supplied with tanks, and tens of thousands of ground troops. During the era of the Arab-Israeli wars, this threat could have come from Jordan, or through Jordan from Iraq, Saudi Arabia or Syria. But today, these armies are not a threat. Saddam Hussein’s military has been destroyed; Jordan has signed a peace treaty with Israel; Syria is in shambles; Saudi Arabia is much more focused on the threat from Iran than any challenge from Israel.

Even if these states were to turn their efforts on Israel, they would not be capable of invading, and their armies would be destroyed long before they ever got to the Israeli-Jordanian border let alone up to the end of the valley deep in the West Bank. That’s because Israel’s Air Force enjoys a qualitative military edge far superior to any of its potential adversaries in the region. Moreover, the valley stretches into the Jordanian side, and any invading force would have to enter the valley in Jordan through a very narrow road one at a time, creating a long trail of vehicles that would be sitting ducks for Israeli air strikes.

To be sure, just because the threat of conventional Arab armies has receded, does not mean that there are no security concerns associated with the Jordan River Valley. Today, the real concern is an insecure border between Jordan and a future Palestinian state. This would create the danger that extremist groups such as Hamas or Palestinian Islamic Jihad would smuggle weapons or people into the new state of Palestine and eventually overthrow a more moderate Palestinian leadership.

But there is a potential solution that could, over time, allow a new Palestinian state to control the overwhelming majority of the Jordan River Valley while keeping Israel secure. This solution would require very little if any land in the West Bank, and certainly not the 22.3% envisioned by Netanyahu.

In 2013 and 2014 General John Allen led a team of Pentagon military officers and national security experts that conducted deep work on this question as part of the Israeli-Palestinian negotiations led by then-Secretary of State John Kerry. Allen proposed a series of potential solutions. These proposals became the starting point for a plan outlined in a report by the Center for a New American Security by myself and a number of American and Israeli colleagues.

We proposed a robust border security system far superior to what exists today on the Israeli-Jordanian border. It would start with a special security zone a few miles wide on both the Jordanian and Palestinian side where people would need permits to enter as is already the case in Jordan today, but would not exclude developing the land for economic and farming purposes.

On the border there would be aerostats — blimps —) that would be permanently stationed providing 24 hour video surveillance, which would be far more comprehensive than the visibility the IDF has today over that border. Moreover, the video from the aerostats would go a few miles into Jordan, allowing any threat to the border to be neutralized before it even got near the Palestinian side. The system would also include secure fences on both sides with sensors that would be triggered by anyone who actually managed to get close to the border.

All of the information from the aerostats and fences would be fed back to joint border control centers on both the Palestinian and Jordanian sides where Israeli, Palestinian, American, and Jordanian security officials would sit together and monitor the border.

And it is important to remember that even as tensions between Israel and Jordan, and Israelis and Palestinians have risen in recent years, security coordination on all sides has remained excellent because all sides have an interest in preventing extremists from threatening Israel, Palestine, and Jordan.

The system would also include fine sand for detection of any crossings, as well as tunneling detection technology (although tunneling under the Jordan River would be much more difficult than tunneling in Gaza or Lebanon) and patrol roads on both sides, where troops would be able to monitor the area.

The most sensitive question is what kind of troops would conduct the patrols on the Palestinian side of the border. But this problem is bridgeable.

Palestinians would prefer that the border be monitored by their troops as they have strong opposition to Israeli forces visibly interfering in their daily lives and view a large visible Israeli presence as a perpetuation of the occupation they want to see end. Meanwhile, Israel’s strong preference would be for the IDF to be on this border, given its long held belief that it must be able to defend itself by itself.

The area in question is not the entire Jordan River Valley but instead a much narrower strip of land along the border that is a fraction of the size of what Netanyahu wants to annex. Because of the topography of the area, this narrow road would be out of the visible sight of almost all civilians moving through the area, creating greater flexibility as Palestinians’ biggest objection to the IDF presence is visible signs of the occupation that interfere with their daily lives.

The parties could agree on a third party force, probably the United States or a US led NATO force of a few hundred troops, to guard the border though that would be a difficult concession for Israel given its concerns that if Americans were killed on this border, it could reshape the US-Israel relationship.

Another option could be a permanent Israeli presence on this narrow strip of territory. Though it would be difficult for Palestinians to accept, their resistance could be ameliorated by making the presence almost invisible. Israeli troops would be limited to deployments right on the border and be dressed in plainclothes, driving unmarked vehicles making them as invisible as possible.

There could also be agreement between Israel and Palestine where Israel leases this narrow strip of territory in exchange for the Palestinians leasing a connector route between the West Bank and Gaza, or leasing port territory in Israel on the Mediterranean to export goods.

Another possibility would be for joint Israeli-Palestinian patrols, though those ended tragically in the Second Intifada. And the parties could also agree on a long transition period, perhaps 10-15 years, where Israel slowly transitioned control of the Jordan River Valley.

All of these options would be challenging, but this is far from the hardest issue for Israelis and Palestinians the work out, which include questions about internal security inside Palestinian cities and the need to establish capable forces to counter potential terrorist cells; how to remove settlers living deep in the West Bank; or the final disposition of Jerusalem.

The security challenges posed by giving up the Jordan River Valley are solvable, and using these concerns as a basis to annex this territory and end the possibility of a two-state agreement would be a terrible mistake.

Ilan Goldenberg is the Director of the Middle East Security Program at the Center for a New American Security.