Trump Is Right: I Don’t Love Israel Enough To Enable His Bigotry 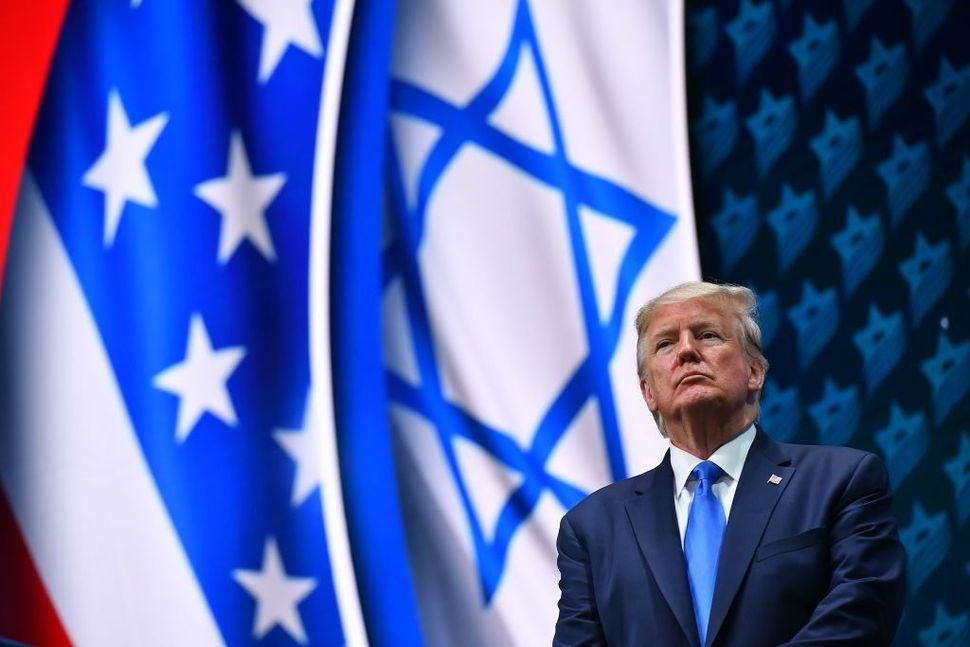 This past weekend, President Trump delivered a speech to the Israeli American Council invoking several anti-Semitic tropes. These included a “dual-loyalty” accusation, when he said that many Jewish Americans “don’t love Israel enough.”

What Trump is talking about isn’t love; it’s hostage-taking.

I don’t love Israel enough to cover my ears and refuse to hear the sound of immigrant children, ripped from their mother’s arms and begging for their families. If you haven’t heard them, you can listen here:

I don’t love Israel enough to ignore my fellow Americans who are suddenly at risk for deportation.

I don’t love Israel enough to forget that this president tried to institute a Muslim ban.

I don’t love Israel enough to forget that the president is a “birther” who spread lies to erase the Americanness of our first black president.

I don’t love Israel enough to forget this president’s ties to the white nationalist movement.

I don’t love Israel enough to forget his relentless assault on the LGBTQ rights movement.

I don’t love Israel enough to forget President Trump’s attacks on American women — whether they be verbal attacks, physical attacks or attacks against our rights.

President Trump is taking someone we love hostage — Israel. And he’s doing this because he doesn’t love Israel; he loves to win. Donald Trump isn’t asking me to love Israel more. He is asking me to love him, because of his supposed support of Israel, despite the evil he has done. He weaponizes our love of Israel against our countrymen. He doesn’t mind that this risks American support for Israel.

If he loved Israel, he would seek to keep Israel a nonpartisan issue, as it has been since the birth of the Jewish state. Rather than loving Israel, he is using our love of Israel against us, to demand fealty regardless of cruelty, corruption, and bigotry.

But though I don’t love Israel enough to stomach Trump’s bigotry and corruption, I and my fellow American Jews are the ones who truly love Israel — because we reject the president. I love Israel enough to demand a vision of American Zionism that possesses moral clarity and moral courage. Mind is a vision of loving Israel that demands that we not forget our friends, our family, our neighbors, or allow them to be swallowed whole. To allow these things is an attack on Zionism; it is perverse and unsustainable. Regardless of your politics — on Israel or America — we must reject this.

I have a deep and abiding love for Israel, the type of love that is born of generations of longing for Zion. I remember the first time my hands touched the Kotel. I remember how close I felt to both God and my own ancestors while walking in the Negev at night. I remember staring at the view from Masada, and feeling the weight of all we have lost and all we have achieved. This type of love, generational love, is unbreakable. But this love is true, it withstands disagreement, disappointment, and profound sadness.

I have read my Torah, which clearly demands a society in which people are treated with dignity, in which we are all subject to the same laws, in which we welcome the stranger, feed the poor and that we seek justice so that we may be worthy of the land of Israel.

President Trump stands in defiance of these values. His demand of our support is the ask of a small, selfish man who lacks the moral caliber to stand beside Israel as a true friend. It stems from a profound misunderstanding of who Jews are. As he made clear to the IAC crowd, he views us as petty, greedy, and deeply transactional — willing to trade support for Israel for the lives of our neighbors.

His is an anti-Semite’s view of Jewish values and politics. He states this plainly when he said, “You are not nice people at all, but you have to vote for me. You have no choice.”

Do not fall for this lie. You do have a choice.

I love Israel enough to despise President Trump. He will never get my vote, and he doesn’t deserve yours.

Carly Pildis is an organizing and advocacy professional living in Washington, DC. She is the director of grassroots organizing for Zioness.

Trump Is Right: I Don’t Love Israel Enough To Enable His Bigotry