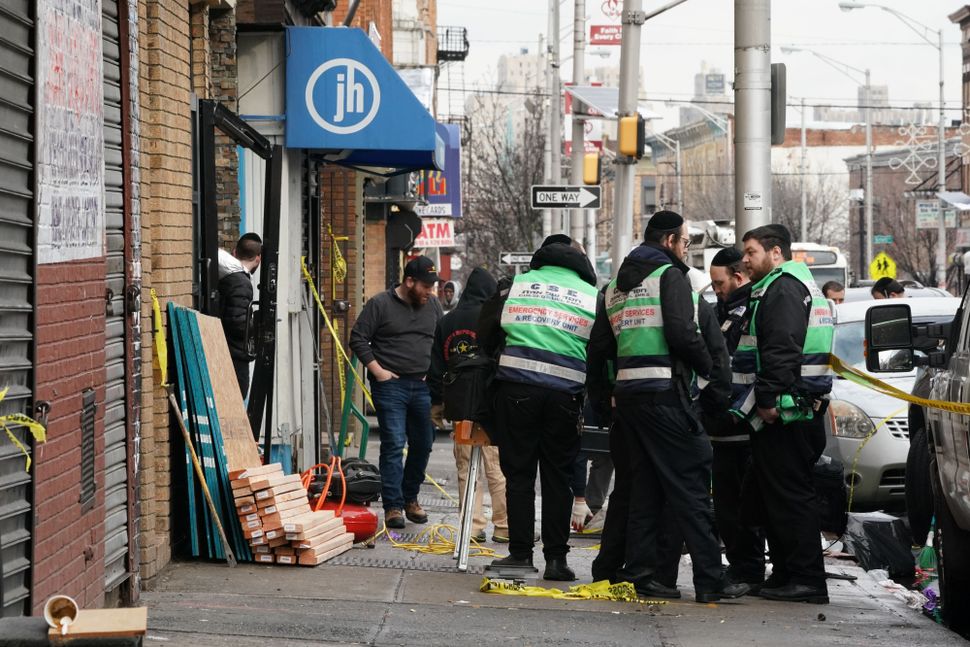 A demolition and recovery crew works at the scene of the December 10, 2019 shooting at a Jewish Deli on December 11, 2019 in Jersey City. - The shooters who unleashed a deadly firefight in Jersey City deliberately targeted a kosher grocery, the city’s mayor said December 11, 2019, suggesting that it was an anti-Semitic attack. Image by Getty Images

Yesterday was one of those days Jews are becoming more and more familiar with. It was a day we wish we could forget, but we know we will remember forever. With two murderers deliberately targeting a Jewish store in Jersey City, killing three innocent people, two of them Jews, the confidence we can have in our own safety and security seems more and more tenuous by the day.

It feels like we will be the only people who will remember it, though. This morning, a cursory look at the front pages of America’s leading newspapers yielded little to alert you that Jews were killed in broad daylight yesterday, for no other crime than for being visibly Jewish.

Six people were murdered in an anti-Semitic attack in Jersey City yesterday.

While many of the details are still oddly elusive, this seems like a WAY bigger deal than the media are making it out to be.

Why on earth is this story absent from the front pages of most major papers? pic.twitter.com/tSXHurydRQ

For many of us, whom I now call “visibly Orthodox Jews,” this comes as no surprise. In recent years, we have been subjected to this sort of treatment more and more.

The recorded levels of hate crimes continue steadily rising in New York and across the country. Government bodies in townships and municipalities overtly discriminate against Jews, using zoning laws to keep them from moving in, and when they do, to keep them from being able to practice their religion or worship. And social media keeps on becoming an ever-growing petri dish of sickening proportion, where Jew-hatred is cultivated and allowed to fester unchecked.

And yet these stories — these real and verifiable stories — for the most part go untold.

Anti-Semitism is seemingly only worth covering if it can be framed in political terms, with President Trump and white supremacy on one side and the Jews and everyone else on the other. The capacity for discussing anti-Semitism in any other way, using any other frame, simply doesn’t seem to exist.

People may think we are having a national conversation about anti-Semitism, but we really aren’t. What we keep on talking about is politics. If we can’t fit every story into the preconceived narrative we’ve built in that arena, we just ignore it and search for a story that we can.

Then we ignore it.

Visibly Orthodox Jews increasingly find themselves left out in the cold, abandoned and alone in the face of the anti-Semitism targeting us specifically. Jewish institutions dedicated to fighting anti-Semitism are there with statements and resources, but beyond that, it’s hard to get anyone to act as though they really care about us.

Even worse, our fellow Jews sometimes participate in our alienation.

“We are a sacred moral community. Our Torah is a book of actions, not a rallying point for mubling in an ancient tongue while wearing the garb of our grandfathers and gathering for a shtickle of herring afterwards.”

When people can only recognize anti-Semitism when it comes from the other side of the aisle, it isn’t ant-Semitism which bothers them; it is their political enemies. It isn’t Jew hatred that is at stake but politics, and winning.

And the Jews — the visibly Orthodox Jews — who are the ones bearing the brunt of the violent anti-Semitism, are the ones who suffer, just because we, and the “type” of violence we are enduring, don’t fit neatly into the political box so many wish we would.

It’s a terrible state to be in, subjected to regular violence and now a massacre, yet to be utterly alone. Won’t anyone set aside politics and stand up for what’s right, stand up for the most visible, vulnerable among us? Why won’t anyone hear our cries as we try to tell the story of how we are being targeted?

Eli Steinberg lives in Lakewood, New Jersey with his wife and five children. They are not responsible for his opinions, which he has been putting into words over the last half-decade, and which have been published across Jewish and general media. You can tweet the hottest of your takes at him @DraftRyan2016.