It’s Not The Jews’ Job To Figure Out How To Stop Anti-Semitism. It’s Yours.

What is happening in America now is not just a crisis for Jews, but for the country as a whole 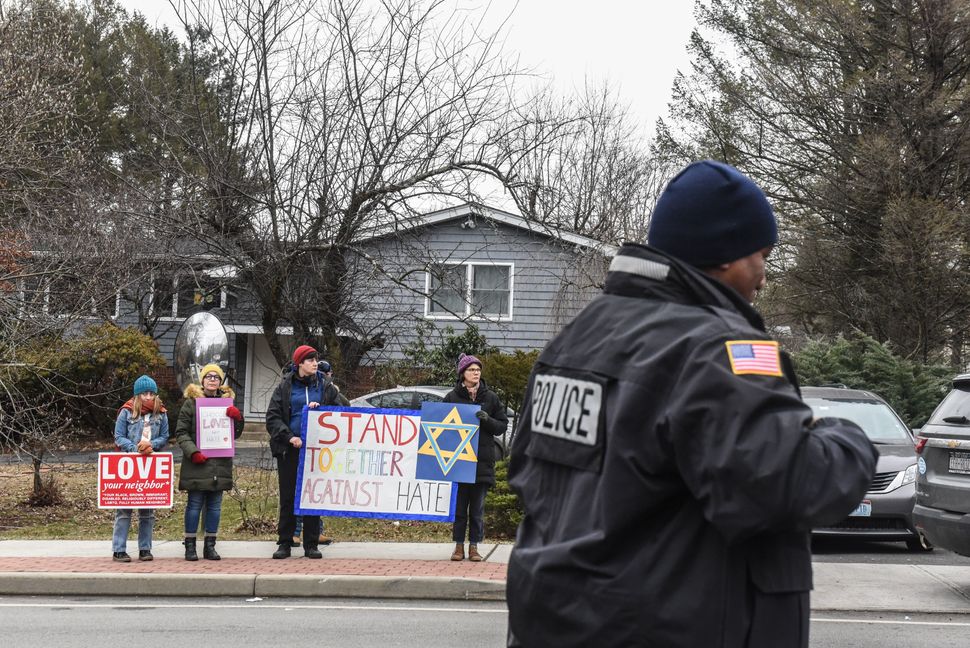 People hold signs of support near the house of Rabbi Chaim Rottenberg on December 29, 2019 in Monsey, New York. Five people were injured in a knife attack during a Hanukkah party and a suspect, identified as Grafton E. Thomas, was later arrested in Harlem. (Photo by Stephanie Keith/Getty Images) Image by Getty Images

Early Sunday morning, as we were reeling from the news of the brutal stabbing attack in Monsey, New York that left five Hassidic Jews hospitalized, a friend asked me, “When we call on civic leaders to fight more vigorously against anti-Semitism in the United States, what can they do?”

It’s an important question that requires an answer. But as I explained to my friend, it should not be my responsibility, or ours as a Jewish community, to answer it.

America is enduring the worst wave of sustained anti-Semitic violence in our nation’s history. In the fourteen months since the Tree of Life massacre in Pittsburgh, places of Jewish gathering have endured deadly attacks in Poway and Jersey City.

The New York City area in particular has endured a spate of attacks on mostly Orthodox Jews over the past few years that have escalated dramatically in recent weeks. Saturday’s violent attack was only the culmination what has become a new normal for Orthodox Jews.

And yet, while Jewish Americans are experiencing a crisis the likes of which we have never experienced in this country, experiencing an acute fear and sense of urgency about sustaining vibrant and public Jewish lives, what is happening in America right now is not just a crisis for Jews. It is a crisis for this nation as a whole.

We have seen this before, in other times and other countries, though less so in this golden haven of the United States. The sobering reality is that the violent anti-Semitism that has come roaring back is in fact a return to the “normal” of being a Jew in western civilization. Anti-Semitism is not an aberration; it is a feature, built into the DNA of our society and expressing itself in new and timeless ways for the past two millennia.

We’ve also seen the heartrending conflicts within the Jewish community about what we ought to do, or what in retrospect we could have done about it. Those conversations — the victim blaming, the self flagellation — are not productive. Because when we engage in them, we fail to affirm that anti-Semitism is not, and has never been about, anything that we Jews do. My Jewish brothers and sisters in New York and New Jersey are not being attacked because of their political views; they are being attacked because they are the Jews who are visible, readily identifiable and most easily targeted.

Anti-Semitism is at its core, an expression of a society’s need to have an “other” to define its own identity and to blame for its troubles, whatever they may be, in any given period. Our society needs the imagined Jew in order to compensate for the deficiency of its own ideas, and the failure of its ideologies.

And that othering of a religious minority strikes at the heart of what this nation represents. This unprecedented moment threatens the very promise of America, as expressed by our first President. As George Washington eloquently wrote to the Jewish community of Newport, Rhode Island, “It is now no more that toleration is spoken of as if it were the indulgence of one class of people that another enjoyed the exercise of their inherent natural rights, for, happily, the Government of the United States, which gives to bigotry no sanction, to persecution no assistance, requires only that they who live under its protection should demean themselves as good citizens in giving it on all occasions their effectual support.”

If the US will now be judged a failure for no longer being a place where Jews can live in safety and security, it is not us, the American Jewish community, who has failed. It will be the failure of the nation as a whole, and of those who stood idly by as expressions of this ancient hatred flourished once again.

I spent the weekend on Jewish communal crisis calls. I’ll attend our emergency meetings again this week, as I have too often these past years. But what is most needed now are the crisis summits organized by our highest elected officials, by the leaders of faith communities, by philanthropists who are leading the way in building the welfare of our civil society.

It is they, not us within the Jewish community, who must lead the way in pushing anti-Semitism back into the closets from which it has emerged.

Jeremy Burton is the executive director of the Jewish Community Relations Council of Greater Boston. Follow him on Twitter @BurtonJM.

It’s Not The Jews’ Job To Figure Out How To Stop Anti-Semitism. It’s Yours.