When terror strikes in a modern-day shtetl 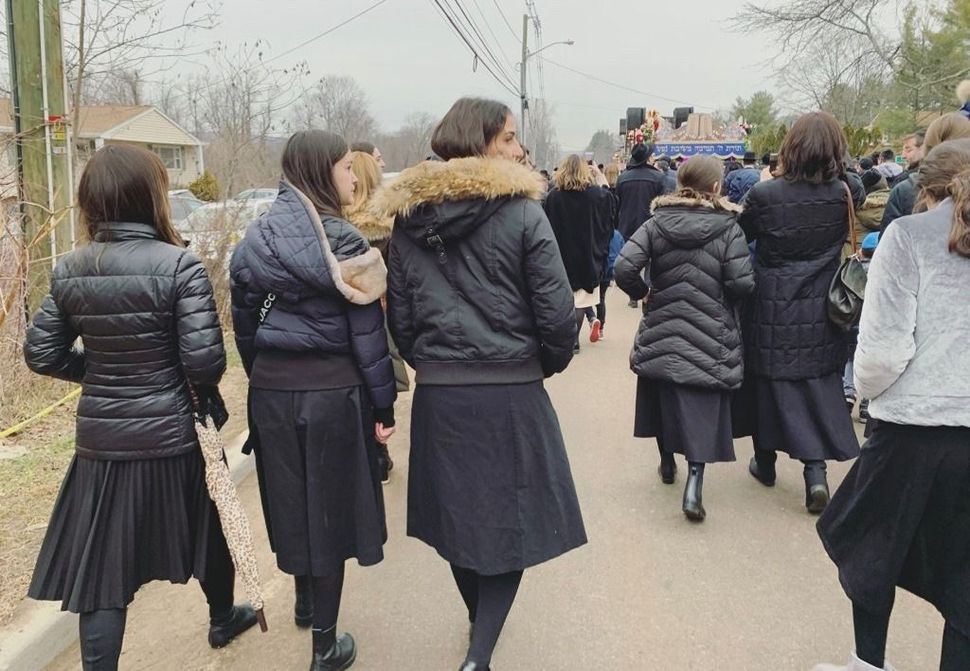 Dedication of a Torah scroll in Monsey. Image by Avital Chizhik-Goldschmidt

And the next morning, residents of the Forshay neighborhood walk around with wide, unbelieving eyes.

Let me tell you something about this quiet, wooded town in Rockland County where a man attacked a Hanukkah party with a machete.

It is, in fact, a bustling universe unto itself. This county has one of the largest concentrations of ultra-Orthodox Jews outside of Israel: Multi-family developments, large mansions and estates, bearded men jogging, women in turbans power-walking. Schools and synagogues expanding every year. Here, residential roads are silent on the Sabbath; here, children can play in the streets on Saturday afternoons; here, teenagers take strolls on Friday nights and get lost in long-winded conversations without thinking twice about security.

This is the place that you move to, to escape the prices and small spaces of Brooklyn — to give your child that American backyard, with a flavor of the old country. This is the place where you don’t have to lock your doors; where your neighbors can come in and out of your home, where social gatherings go late into the night, because no one is rushing anywhere.

This is a kind of place where billionaires live in heimishe Taj Mahal’s that they’ve built themselves; and this is also the place where the needy live just around the corner, receiving anonymously donated boxes filled with Sabbath food every Friday.

This is where you buy your kosher groceries, your modest dresses and stockings, your yarmulkes and tzitzis for your sons, your religious books, your husband’s black hats — all in a few adjacent strip malls.

This is a place with a gemach, a free loan fund, for anything one might need: A wedding gown, a briefcase for a job interview, a wheelchair.

This is a community that aims to be self-sufficient: Hatzoloh responds to medical emergencies sooner than EMS; “Chaveirim” volunteer patrollers provide extra security for local events — men with side-locks and several smartphones clipped on their belts, wearing reflector vests and badges.

And so. It is bizarre to come here, to this place — and to encounter a crime scene, and then the joy of a Torah scroll dedication.

He shrugs. “The media is all here.” He points to the reporters and camera crews that have intruded on his block. “They think it’s a story. But there’s no story anymore. A guy came, stabbed, and left. No more story.”

On this shaken Sunday morning, hours after a man entered a rabbi’s home stabbing five people — Forshay locals stroll around, their children at their sides, silently watching the continuous police and media presence.

“My son was very panicky last night,” says Rabbi Daniel Coren, who lives in the neighborhood. “He’s ten years old. Then we pulled out Tehillim,” he says, referring to the Psalms, “and we started davening [praying]. That helped a lot.” 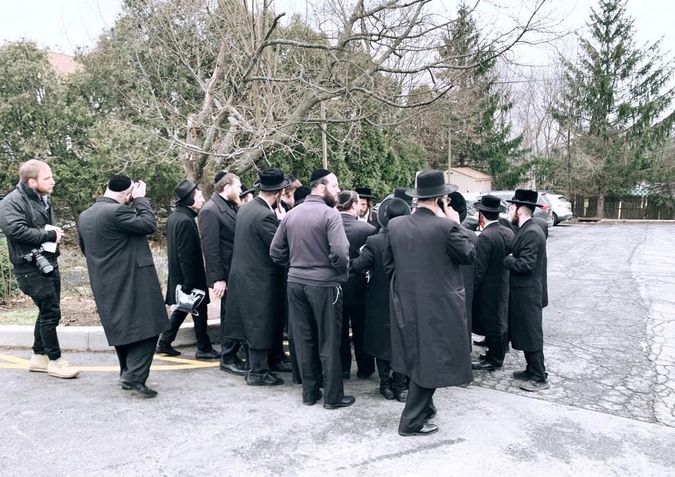 The scene on Forshay Road in Monsey, NY. Image by Avital Chizhik-Goldschmidt

Here, this regular Monsey home, of the rabbinic Rottenberg family — large, grey, shingled — has become a stage for international television stations. Cameramen smoke, reporters stand and tweet, Hasidic men wander out of their 12:00 p.m. morning services and start asking questions in Yiddish to passersby, engaging in the traditional past-time of determining lineage: “Who just arrived? Dani Dayan? Is that the son of Moshe Dayan?” 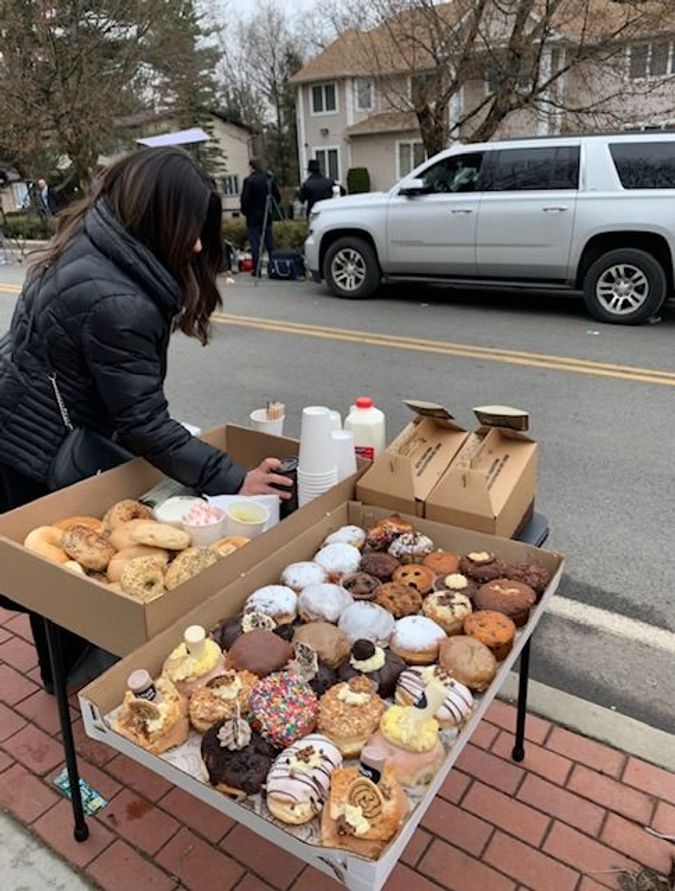 Shoshana Bernstein lays out treats for the journalists covering the story in Monsey. Image by Avital Chizhik-Goldschmidt

Shoshana Bernstein, a community organizer and Forshay resident, appears with a mini-van filled with boxes of coffee and baked goods for journalists. “I live in the neighborhood,” she tells me. “It’s terrifying. We knew right away through Monsey WhatsApp groups, and when we heard the lights and sirens. People were told to stay inside. I had two children who were not home last night, they had gone to friends. One of the town officials came out last night and escorted my daughters home.”

“The questions in our minds right now are: Is it time to move to Israel?” she asks aloud. “Is this a new reality? Can I still go shopping? Can I keep my children safe? That’s what people are talking about.”

Past the crime scene, walk just up the street, and you’ll encounter what is perhaps the mecca of Forshay — Bais Medrash Ohr Chaim, the community center built by local philanthropist Lazer Scheiner. Known as simply “Scheiner’s” by the locals, the center is a hodge-podge of buildings and tents which host 93 minyans a day, offering quick services at all hours.

Scheiner has invited the community to the completion of a Torah scroll in his home, followed by the traditional dancing procession to the scroll’s new home, his synagogue. After Saturday’s attack, it was decided that the procession would go to the Rottenberg home first, before the synagogue, in an expression of spiritual fortitude — what was a regularly planned communal event emerged into something else entirely.

In Scheiner’s synagogue complex, men are bustling about, preparing for the day’s activities; teenagers stand on line at the food truck parked on the side; a utensils mikveh stands open, ready to kasher dishes. On the outskirts of a service, two young Hasidic men have stepped out to chat. “Self-defense,” one says to the other, emphasizing with his hands.

Walk with me, here on this bleak Hanukkah day.

Take a small path that winds through a wooded area, a brook below. It was here, just five years ago on a similar December day, that I strolled these streets as a bride — how different the world looks now.

Pass by some neighborhood children, who are visibly confused by the commotion in their quiet hometown.

A high-pitched melody, sung by a young boy’s voice, blasts from the speakers of a truck: “Shivti b’bais Hashem kol yimei chayay” — I shall sit in the house of the Lord all the days of my life.

And from every direction, the children of Monsey, boys on their scooters and girls in their cliques, are streaming into the Scheiner home, eager to receive their paper crowns, flags and torches. 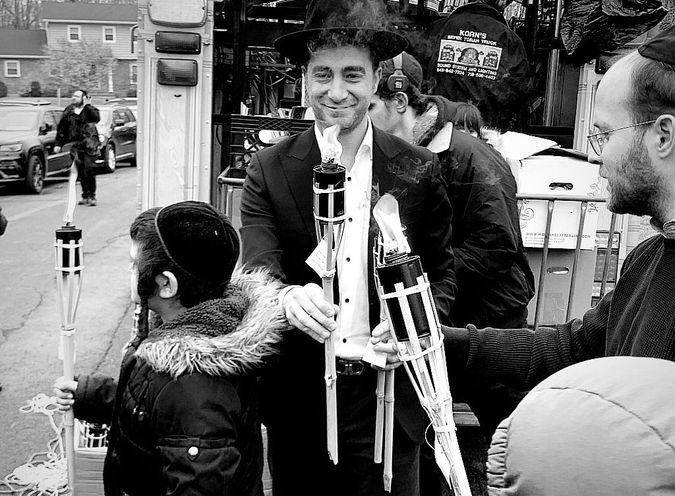 At the Torah scroll dedication in Monsey. Image by Avital Chizhik-Goldschmidt

Enter the house, and immediately you are hit by the smell of whiskey, expensive meats, smoky colognes. In the hallways, men and women stand and whisper so that the children don’t hear, “The guy pulled out a machete. It’s like a movie.”

Here, all of the shtetl’s characters have gathered: The scholars with their books, the businessmen with their grey suits, the cigarette-smoking Hasidic boys with rebellious streaks, the wig-wearing young mothers with their strollers, the beggars holding their hands out and nodding tzedoke tzedoke, the high school girls with their trendy headbands and shy smiles.

Finally, the honoree himself comes out with his Torah scroll, flanked by dancing and singing men. He is escorted to a canopy set on wheels, a chuppah of sorts, and the procession begins, a sea of men and women dressed in black fill the streets, led by a moving truck with three Hasidic men singing. 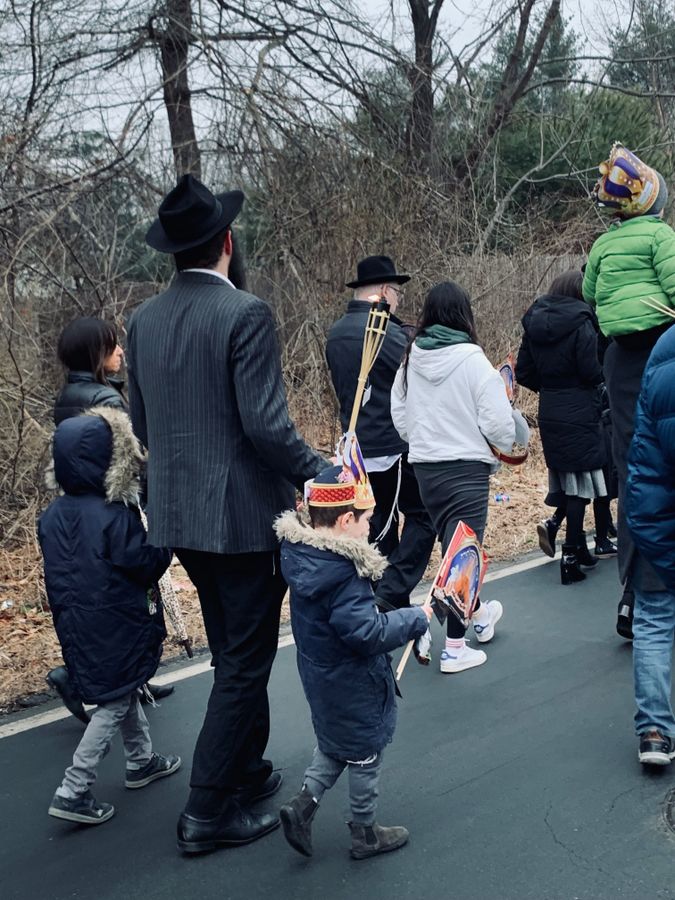 The procession through Monsey. Image by Avital Chizhik-Goldschmidt

In front of me, black hats are thrown in the air; behind me, the women smile watching their men. They are there, most of all, to transmit to their children a lesson about the joy of a new Torah scroll. What else could be more important, after all, than a new text, a new opportunity to read our cherished Words?

But the women’s joy is reserved — and not only out of modesty. Perhaps, it’s careful. 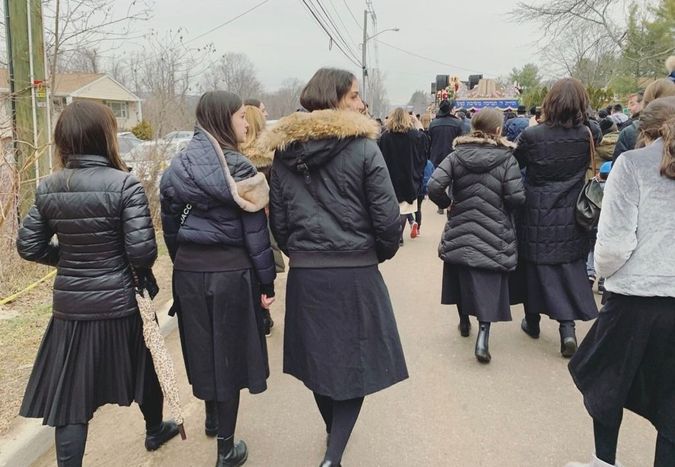 Dedication of a Torah scroll in Monsey. Image by Avital Chizhik-Goldschmidt

It is the mothers who I keep looking at today. Are they also looking at their progeny in shock —- until now we sang them songs and read them stories about Antiochus and Haman, but that was in past tense, and how on earth do we talk about this in present tense? Are these mothers, too, listening to the men in their lives huff and puff about being proudly Jewish, “never hide who you are!” — but then secretly wish they could hide their little boy’s yarmulkes under winter hats, and tuck in their little boys’ tzitzis, when they leave their neighborhoods?

“Al hanissim!” For all for the miracles, the Hasidic singers sing at the tops of their lungs.

The dancing grows ever more feverish. We don’t know! We don’t know! the revelers seem to say, holding on to their head-coverings as they kick their feet — the jubilation on this street is almost drunken, the singing with abandon. It’s a mixture of fear, of shock, of optimism and faith and a bissel Macallan.

As we walk, I have this sense that no one really knows where exactly this procession is heading — and here, in Monsey, that’s the point. Only God knows.

When terror strikes in a modern-day shtetl