Modesty, At A Modest Price 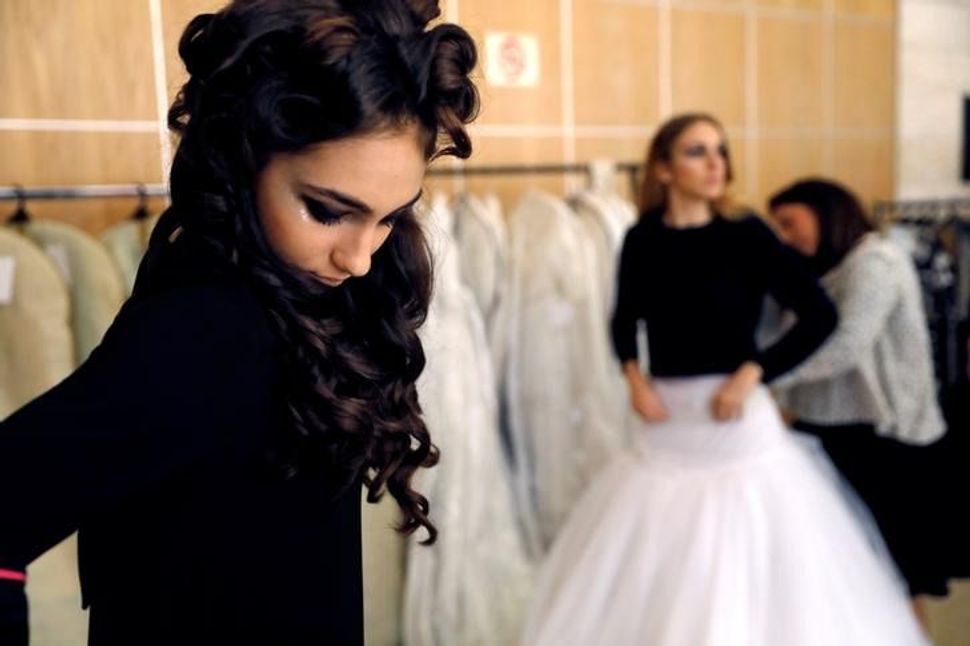 It’s 8 p.m. in a basement apartment on 54th Street, a sleepy residential block in Boro Park.

Several Hasidic women sit on a sofa, surrounded by strollers and plastic bags from the Oh Nuts! candy shop on 13th Avenue. Every so often, they peek into the next room to watch Mrs. Ehrenfeld at work.

The room where Mrs. Ehrenfeld, as she likes to be called, is standing is blindingly white.

The walls are lined with wedding gowns — all long-sleeved and high-necked, a blur of tulle and satin and lace. A young woman, about 19 years old, stands in the center, as her girlfriend buttons her dress up the back. Mrs. Ehrenfeld holds a few other gowns and comments, “Yes, this one is more flattering, I think this one.”

This is the Haredi answer to “Say Yes to the Dress”: a wedding gown gemach, a free loan organization, which lends out modest wedding gowns for a $250 fee.

According to the wedding website The Knot, an average American wedding dress costs about $1,564, — plus approximately another $300 for accessories and at least a few hundred more for modesty alterations. The cost of a dress is significant — especially if you’re planning a kosher wedding with several hundred guests, and your parents are still paying off your brother’s wedding from last year, and you have another sister who’ll probably get engaged in the next month. A gown gemach is a tailor-made solution for a community with many weddings and particular modesty guidelines.

When I asked Mrs. Ehrenfeld for an interview, she waved me away. “I don’t like publicity. I do this as a mitzvah,” she said, and rushed away to hand a gown to a young woman. A Boro Park resident, Ehrenfeld opened the Zichron Yehudis Miriam Bridal Gemach in memory of her sister, who died as a newlywed shortly after having her first child.

“I came by myself. I told all my friends I need to do this alone.”

“I know exactly what I want, and I don’t think they’re gonna have it, I want a straight gown, it’s just not really the style in Boro Park.”

The younger brides in the room, those who look about 18 or 19, mostly Hasidic, come with their mothers, who march the girls in and out of the fitting room.

“This is a quiet night,” a volunteer said, as she gestured at the chaos in the room, 19-year-olds in puffy skirts, mothers in wigs chattering among themselves. In a hurry to get a coveted spot in Mrs. Ehrfield’s fitting room, the girls have thrown their winter coats onto the sofa. “Usually there’s a line out the door.”

One bride brings a group of friends, who stand around her, oohing and aahing as they look at pictures on her phone: “He’s very tall. He looks like a bar mitzvah boy. He’s 21.”

“How did you know he’s the one?” one friend asks.

The bride smiles and breezes by the question. “I’m one of the last ones in my grade to get married, so it’s relaxed for me, you know? I feel less pressured.”

It’s the Orthodox version of prom dress shopping. And in a community where engagements last an average of two to three months, where weddings are often a weekly social event, a chasseneh (wedding) is planned with the swift efficiency of a military operation. The gemach– is a unique way in which the Orthodox community lightens the burdens of wedding expenditures on families with many children.

If you read the classified ads in any Haredi neighborhood, you’ll see just about anything available via a gemach: furniture, baby gear and clothing, medical equipment, clothing and shoes, suits and special-occasionwear, wigs, table centerpieces and tablecloths, space heaters, laptops, leather briefcases for interviews.

Gemachim also serve as necessary loan funds for Orthodox families, which often shoulder such large expenses as buying homes in addition to funding weddings. These unofficial, privately run loan societies serve as the bulwark of the ultra-Orthodox community, particularly in Israel, where poverty is high (mainly due to high birth rates and many men choosing religious study over work). At gemachim, interest-free loans are given based on local reputation, and repayments are spread out over a long period, according to the borrower’s ability to repay them.

“The incentive to deposit and to donate money to gemachim is both communal and halachic,” write Nitsa Kaliner Kasir and Assaf Tsachor-Shai of the Haredi Institute for Public Affairs in Jerusalem. It is “derived from the biblical commandment of ma’aser (tithes) as well as the commandment to lend, whose essence is to lend to those with limited capabilities so that they can support themselves independently.” 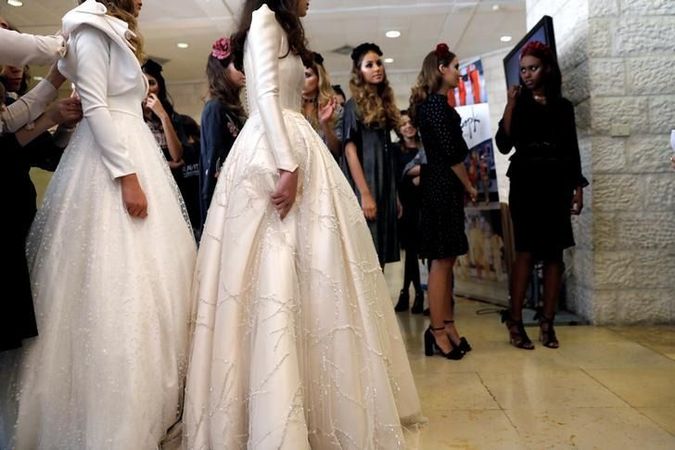 At Mrs. Ehrenfeld’s gemach, a child cries, his mother hands him a bottle and calls out to her eldest daughter to hurry up with the dress.

The door opens, another young bride walks in and spots a friend who’s just leaving with her mother — their weddings are scheduled mere weeks apart. They shout “Mazal tov!” and some girls break into ‘“Od Yishama,” the traditional song sung for the bride and groom.

I watch the girls and am thrown back to my own bridal days — the light way in which we skipped in ballet flats, our uncovered hair thrown into ponytails. Now I sit here, heavily pregnant, bewigged. Was it only three years ago that I stood in the wedding dressmaker’s workshop? How quickly time goes, and a kalleh (bride) becomes a mameh (mother) in the blink of an eye.

A volunteer named Mrs. Goldstein takes down information at a computer on a small table at the front.

“Two hundred and fifty dollars, please,” she says to a bride checking out with a garment bag. “Please return the gown before the weekend after the wedding. Do you need anything else? Petticoat, shoes, headpiece, veil? You have it?”

Mrs. Goldstein turns to me afterward and says, “We serve everyone here, secular to Hasidic, all sizes, all styles. You know, each group has their own thing — Lubavitch girls like mermaid dresses, Vizhnitz girls like the pouf.”

One girl is reading Psalms aloud with fervor. “Amen, amen!” the others shout in response.

Here, in a basement in Boro Park, brides are trying on dresses, as well as prayers and dreams, for size.

Avital Chizhik-Godschmidt is the Forward’s life editor. Write to her at avital@forward.com

Modesty, At A Modest Price