No, We Aren’t Seeing The Return Of Nazi Germany 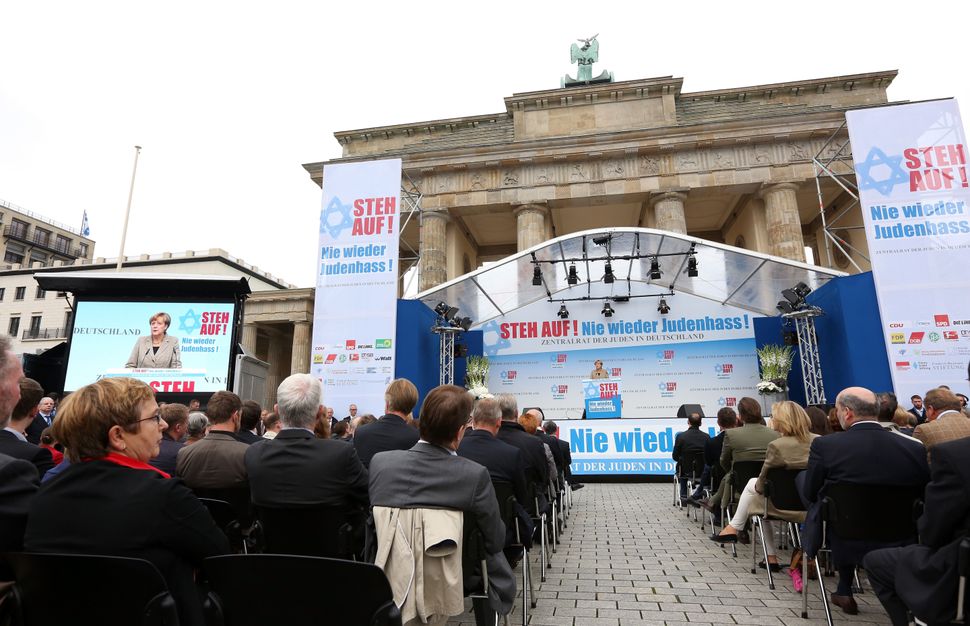 German Chancellor Angela Merkel speaks behind the Brandenbug Gate during a rally against anti-Semitism on September 14, 2014 in Berlin, Germany. With the slogan ‘Stand Up! Never Again Hatred Towards Jews’ (‘Steh auf! Nie wieder Judenhass’), the Central Council of Jews in Germany (Zentralrat der Juden) organized the demonstration after anti-Semitic incidents in the country occurring in the wake of the conflict in Gaza this summer, in which more than 2,000 Palestinians were killed by the Israeli government, the majority of whom were civilians, according to Palestinian authorities. (Photo by Adam Berry/Getty Images) Image by Getty Images

It is entirely predictable. As soon as an antisemitic attack occurs, particularly one as horrific as took place in Monsey on the seventh night of Hanukah, the phone, email, and social media accounts of people, such as myself, who study and write about antisemitism, are inundated with queries and comments. Some come from reporters and others come from “people on the street,” many of them Jews.

I used to scoff at this comparison because it is so beyond the pale. In the wake of the recent assaults, I no longer scoff. My response has changed, not because the comparisons are correct — they are not — but because they come from a place of fear and confusion.

In the past ten months, since the publication of my book on antisemitism, I have travelled throughout North America as well as many other places in the world. I have met with Jews who are scared and confused. I understand their fears. I share them. However, if we are to fight this scourge, it is important that we do on the basis of fact, not emotion. We must recognize the fundamental difference between then and now.

The contrast between the situation of German Jews of the Third Reich and today is best illustrated by a story I heard from a survivor at the United States Holocaust Memorial Museum. He came from a small town in which the local school was no longer a tolerable place for a Jewish child. His parents sent him to a Jewish boarding school in a large city. On the night of Kristallnacht (November 1938), German government forces burned synagogues and ransacked Jewish shops. They beat up random Jews on the streets, deported thousands to concentration camps, and murdered close to a thousand.

On that night the teachers burst into the dormitory of the boarding school. They told the children to quickly run out of the building because it was being attacked. As the youngsters emerged onto the street, they wondered where to go. Instinctively, they decided to adhere to the advice parents have given their children for generations: when you are in trouble, look for the helpers. They said to one another: “Let’s go to the policeman.” They ran to the closest officer, fully expecting to be protected. Instead he sternly rebuffed them: “I don’t help Jewish children.”

Herein, lies the essence of the difference. During the Third Reich, the government was the very source of the antisemitism. Today, the situation is precisely the opposite in the vast majority of countries. When tragedy strikes political leaders are quick to condemn these acts.

A few years ago, at a rally against antisemitism at Berlin’s Brandenburg Gate, Chancellor Angela Merkel declared: “That people in Germany are threatened and abused because of their Jewish appearance or their support for Israel is an outrageous scandal that we won’t accept.” She did more than condemn attacks on Jews. She cast the fight against antisemitism as a national concern: “Anyone who hits someone wearing a skullcap is hitting us all. Anyone who damages a Jewish gravestone is disgracing our culture. Anyone who attacks a synagogue is attacking the foundations of our free society.”

Around the same time, then French prime minister Manuel Valls spoke at a gathering at the Great Synagogue of rue de la Victoire in Paris to an audience of more than a thousand representatives of the French Jewish community. He declared that “the fight against racism and antisemitism [is] a great national cause” and called on all French citizens to “mobilize [and] go out in the street” to fight this prejudice. He concluded by declaring, “Without the Jews of France, France would not be France.”

In the wake of more recent events, leaders of France, Germany, England, the United States among others have continued to make these two points: these attacks are not just unacceptable, but they are attacks on the essence of the nation. This is a striking contrast, not just to the Third Reich, but to all previous eras in western history. Jews in the Third Reich were abandoned by their government. Today increasing numbers of government officials are beginning to recognize that these attacks are a threat to the democracy they have been empowered to defend.

The recent rise of antisemitic attacks is serious. These attacks must be addressed forcefully and unequivocally. But, even as we are beset by fear, we must not allow those fears to distort our understanding of the contemporary situation.

At the very least, we owe it to the memory of German Jews of the 1930s to get this history right.

Deborah E. Lipstadt is Dorot Professor of Holocaust History at Emory University and the author of ANTISEMITISM HERE AND NOW. She can be found on Twitter @DeborahLipstadt

No, We Aren’t Seeing The Return Of Nazi Germany