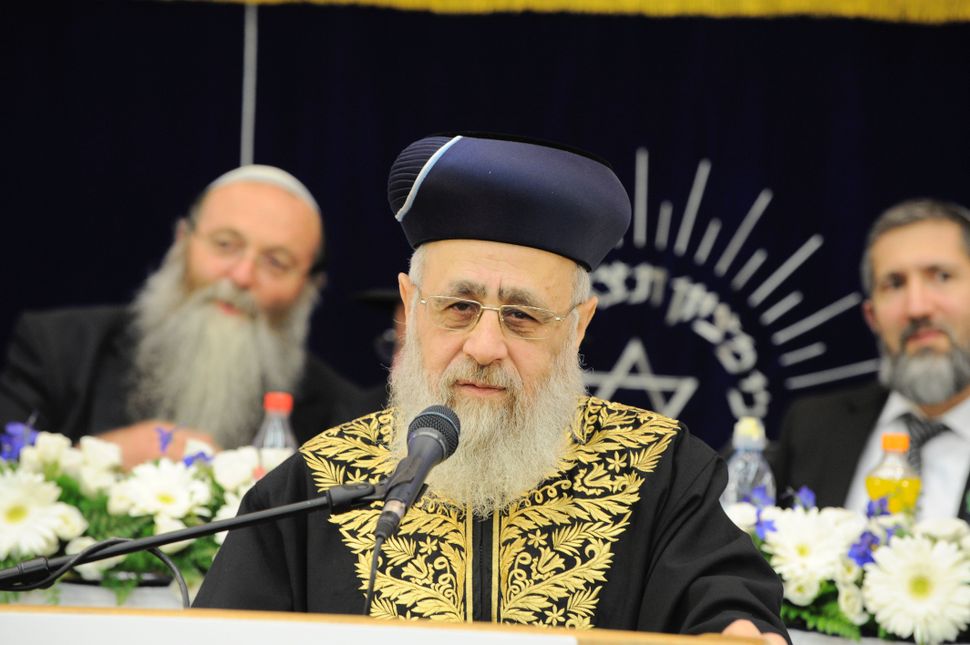 As anti-Semitism surges worldwide, Jews across the globe could sure use a little unity. Unfortunately, we just got the opposite, courtesy of Yitzhak Yosef, one of the two chief rabbis of Israel.

During remarks at a rabbinical conference last week, Yosef exploded in a tirade against ex-Soviet Jews who had immigrated to Israel. Yosef’s remarks — which were denounced by everyone from Benjamin Netanyahu to the Anti-Defamation League — are almost too vile to publish:

“There are many, many non-Jews here; some of them are Communist, enemies of religion, haters of religion,” spewed one of the chief representatives of Israeli Judaism. They are “total non-Jews; really, completely non-Jews.”

This isn’t Yosef’s first turn at the bigotry rodeo; in 2016, he generated headlines by proclaiming that “according to Jewish law, it’s forbidden for a non-Jew to live in the Land of Israel — unless he has accepted the seven Noahide laws.” Yosef proposed a solution for those who don’t adhere to this: deport them to Saudi Arabia.

A year later, Yosef implied secular women are little different from animals. A year after that, in 2018, he publicly called black people “monkeys,” remarks which received widespread condemnation, including by the ADL, and nearly got him charged with incitement of racial hatred, a crime under Israeli law.

Now, the moral sinkhole occupying the position of Chief Rabbi of Israel turned his attention on Soviet Jews.

If one gets points for unintentional irony, Yosef knocked this one out of the park: During his diatribe, the man who is ostensibly the face of Judaism in the Jewish state vomited out an impressive sampler of anti-Semitism. By calling Soviet Jews anti-religious Communists, he parroted tropes used by Jew haters ranging from Henry Ford to the Nazis. And in denying us our Judaism, he wound up going even further than the Soviet dictatorship.

The trope of Jews being anti-religious agents of Communism is, of course, one of history’s deadliest lies, spawned in tzarist Russia by the anti-Semitic forgery the Protocols of the Elders of Zion. The Judeo-Bolshevik conspiracy, which claimed Jews undermined Western nations by spreading Communism, was used by Henry Ford in his “International Jew” and McCarthyites who had trials and blacklists of Jews suspected to be Communist. It was used by the Nazis as justification for the Holocaust and Nazi collaborators as justification for aiding the Third Reich.

But the kicker to Yosef’s smears is the great irony surrounding Soviet Jews: To the Soviets, we were too Jewish, while to our Western Jewish brethren we weren’t Jewish enough. The one thing Moscow and bigots like Yosef concurred on is ex-Soviet Jews just don’t measure up.

To give credit where it’s due, the Red Army saved hundreds of thousands of Soviet Jews, including my parents and grandparents, from the Holocaust. But the USSR was also thoroughly anti-Semitic. For seventy years, the Kremlin diligently suppressed all aspects of Judaism.

Uncountable numbers of Jews perished in the gulags. Rabbis were killed outright; synagogues seized and converted into Communist Pioneer palaces. Quotas ensured certain occupations and positions were forbidden to Jews. Year after year, arrest after arrest, the Soviet machine eradicated Jewish religion and culture, stripping Soviet Jews of all but the “Jew” designation on our national ID cards, which ensured our status as second class citizens.

The fact that any vestige of Judaism survived communism is itself a miracle. For some, though, it wasn’t good enough.

Plenty of Westerners respected the reality that several generations of Soviet Jews were robbed of their heritage. But many patronized us as ungrateful children, unwilling to properly thank our liberators and embrace the way they wanted us to be Jewish.

We ate too much bacon, you see. We didn’t know our prayers; of course, that’s because the Soviets slaughtered the rabbis, but to those like Yosef, life under a brutal dictatorship is no excuse. We celebrated New Year’s with Christmas trees; to our self-appointed Western guardians, our family traditions were simply an unseemly sin.

Some even became concerned we didn’t know enough about the Holocaust. Unlike Americans and Israelis, who need to construct Holocaust museums, Soviet Jews come from a land crisscrossed by ravines containing bodies of those killed in the Shoah. We walked by the Holocaust on our way to buy groceries, but to the Westerners, we weren’t educated enough.

Given this history, Yosef’s disgusting declaration that Soviet Jews are non-Jews is only the latest in a familiar pattern. We’re used to the callous disdain of Westerners who wouldn’t last a day under the Moscow dictatorship. Still, hearing it from a man born in comfort who rode his father’s tallit to become chief rabbi of Israel is a bit grating.

One should always exercise caution when speaking about a group of people, but considering I’m infinitely more qualified to discuss Soviet Jews than Yosef, I feel comfortable enough to remind him and other Western brethren we’ve disappointed of a few simple things:

Some of us may not be religious. Some of us just won’t get with the program. Some of us eat bacon. But in the grand scheme of things, better have bacon than bigotry.