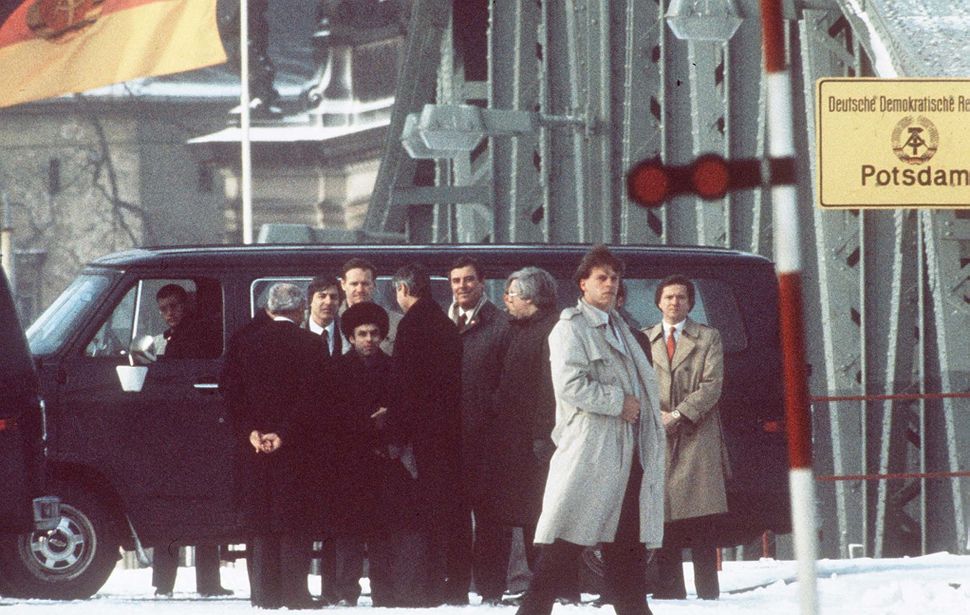 The Soviet dissident Anatoli Sharansky (with hat) shown in a file photo dated 11 February 1986 during a major East-West prisoner exchange which took place on the Glienicke Bridge between Potsdam, East Germany and West Berlin. He was jailed for 13 years by a Moscow court in 1978 on spying charges, provoking a worldwide storm of protest. Image by Getty Images

It’s 1988. My Dad and my teenage self are in our tiny Zhiguli car, stuck at a railway crossing in my Siberian home town of Novosibirsk. The road is narrow, the pavement is full of potholes. As the traffic begins to move, our car stalls in front of a massive Kamaz truck coming in the opposite direction.

The driver is angry; he may also be drunk. He is raining anti-Semitic curses down on us, all the while pumping the gas pedal as if getting ready to run us over.

I look over at my Dad, who is desperately working the gearbox. He is silent but his face is white.

It’s the first time in my life that I see my brave, strong Dad terrified. And that scares me more than the truck, whose massive wheels, now bare inches from our car, could squash us like a bug.

This episode from my Soviet life, along with many others, has been rising up in my memory lately as the progressive wing’s anti-Zionist discourse goes mainstream in the Democratic Party, my own political home over the nearly 30 years of my American life. In the words of the young, idealistic activists, I hear word for word some of the slogans I used to hear back in the USSR. And it’s deeply disconcerting.

When I told my Dad that there are serious people today claiming that anti-Zionism is not the same as anti-Semitism, he burst out laughing.

“We’ve heard before,” he said.

It was under the banner of anti-Zionism that Soviet anti-Semitism blossomed.

The Soviet anti-Zionist campaign I personally experienced began in 1967 and lasted essentially through the end of the empire. In that time, hundreds of books and thousands of articles were published painting Zionism as a racist ideology. Anti-Zionist caricatures using classic anti-Semitic imagery peppered the pages of Soviet newspapers. They equated Zionism with Nazism, fascism, American imperialism, German militarism, and apartheid. They compared Zionism to the Ku Klux Klan. The “Zionist” of those cartoons was easily recognizable as a stereotypical Jew of the Nazi propaganda.

But the Soviet anti-Zionism began much earlier than that. It began in the late 1940s, when Joseph Stalin, who initially supported the establishment of the state of Israel, realized that it was not going to be the vanguard of socialist revolution in the Middle East and instead was joining the “imperialist” camp.

Soviet Jews’ enthusiastic support for the new state served further as a trigger. For Stalin, Israel was now a hostile entity and the Soviet Jewry — a potential fifth column.

Stalin’s deadly anti-Semitic show trials of the late ‘40s-early ‘50s all included some allegations of Zionist espionage and conspiracy. But it was the 1952 Rudolf Slánský’s trial in Prague that for the first time presented the world with the idea of a global Zionist conspiracy. 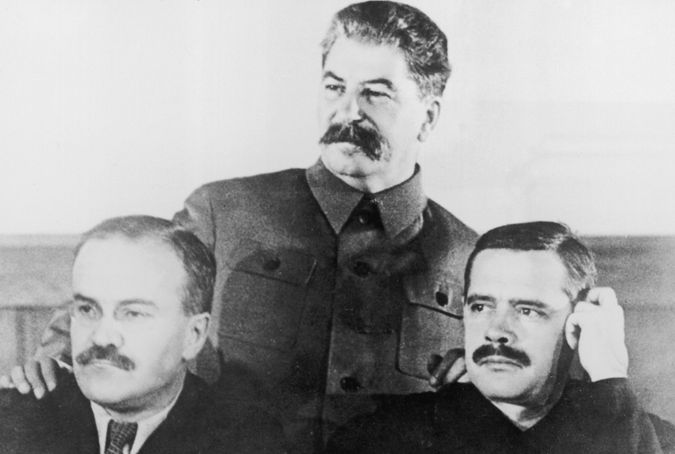 Soviet political leader Joseph Stalin (1879 - 1953) stands over Vyacheslav Molotov (1890 - 1986), (left) and Nikolay Andreyev with his hands on their shoulders. Image by Getty Images

All eleven Jewish defendants were executed, sending a clear message that Zionism was now a term of political abuse, and any Jew was potentially vulnerable to it.

Among the things that Slansky was forced “to confess” was that he had magnified the danger of anti-Semitism and falsely slandered as anti-Semites those working to expose his anti-Zionist conspiracy. The trial triggered a massive wave of anti-Semitism throughout the socialist bloc.

Anti-Zionism remained part of Soviet domestic and foreign policy after Stalin’s death, albeit in milder form. Then came the Six Day War and Israel’s unexpected victory. Threatened by the defeat, the Soviets responded with a new, wide-ranging anti-Zionist propaganda campaign.

The KGB and the Communist Party’s Propaganda Department were put in charge of the campaign. They deployed a group of a dozen or so “Zionologists”— self-styled experts on Zionism — who produced the campaign’s foundational texts. These texts drew directly on the Protocols of the Elders of Zion. Some in the group were closeted admirers of Hitler and Nazism and used “Mein Kampf” as a source of inspiration.

Under the direction of the KGB, this group constructed Zionism as a global anti-Soviet conspiracy manipulating world affairs. Its primary movers and shakers were American “Zionist” investment bankers and “Zionist”-controlled media, where Zionist substituted for Jewish.

American Jewish organizations, which at the time were coming together in a campaign for Soviet Jewry, were viewed as part of the conspiracy. Israel was its racist, fascist, imperialist, colonialist vanguard in the Middle East. 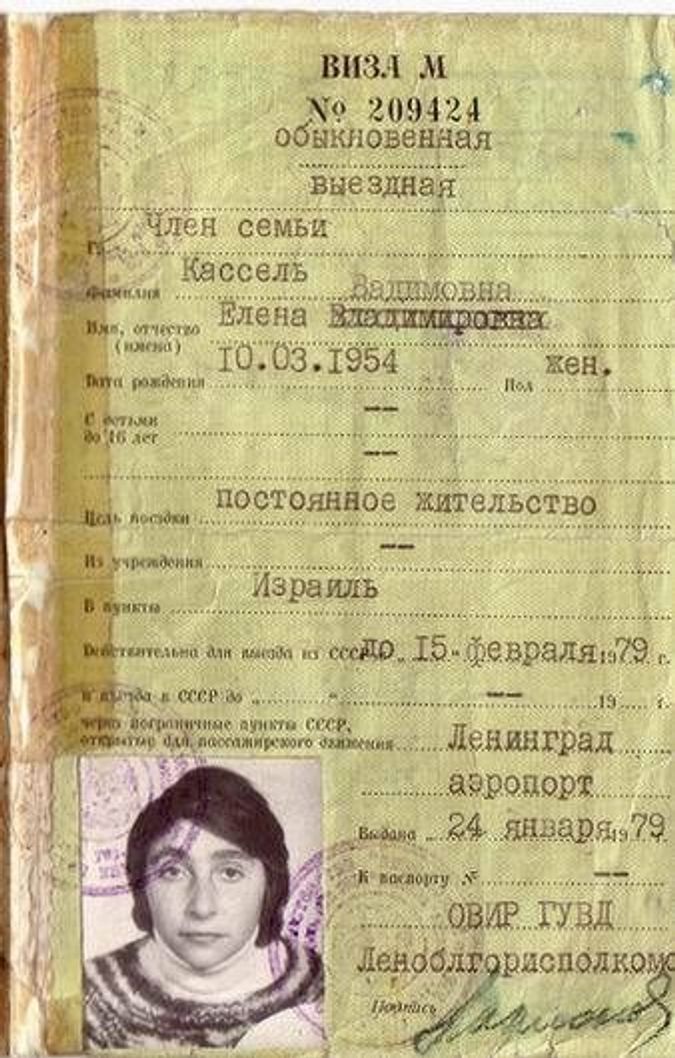 A type 2 USSR exit visa. This type of visa was issued to those who received permission to leave the USSR permanently and lost their Soviet citizenship. Many people who wanted to emigrate were unable to receive this kind of exit visa. Image by Wikimedia Commons

Multiple segments of Soviet society were pulled into the campaign. Celebrities gave press conferences condemning Zionism and Israel. School children were made to write letters of support for the Soviet stance against the Zionist threat. Labor unions and academic councils joined in the chorus of condemnation. The prestigious Academy of Sciences was tasked with providing “scientific” foundations for the campaign and published its own anti-Zionist tractates.

In 1983, the KGB established the Anti-Zionist Committee of the Soviet Public. Consisting of prominent Jewish figures, it was meant to deflect accusations of anti-Semitism from abroad. It became an important tool in delivering Soviet anti-Zionist propaganda messaging. State Department monitored the committee as part of Soviet influence campaigns and foreign propaganda.

Soviet anti-Zionist articles were reprinted in numerous languages, from English to German to Arabic. The Soviets were also behind the UN’s infamous Zionism is Racism resolution and were a crucial part in instilling the organization’s single-minded anti-Israel animus.

The campaign created an oppressive climate of anti-Semitism at home. Judaism and Jewish customs were increasingly squeezed out, denigrated and prohibited. Jewish prayer books were considered Zionist literature because they contained the line “Next year in Jerusalem.”

Jewish activists like Natan Sharansky, who fought for the right of Soviet Jews to live as Jews or be allowed to emigrate, were branded as Zionists, harassed and condemned to years of prison and gulag. Simply studying Hebrew could land you in jail. 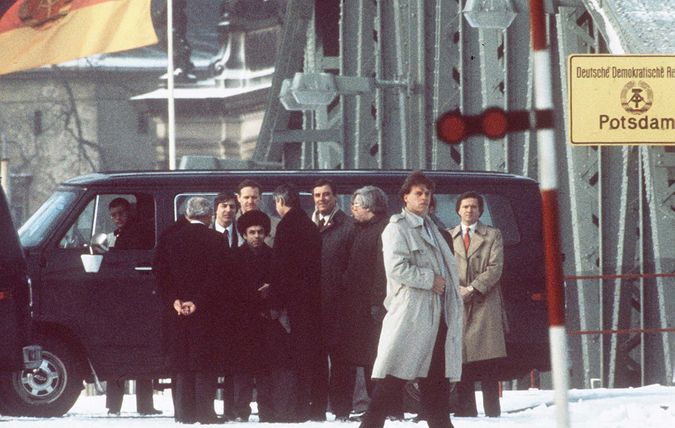 The Soviet dissident Anatoli Sharansky (with hat) shown in a file photo dated 11 February 1986 during a major East-West prisoner exchange which took place on the Glienicke Bridge between Potsdam, East Germany and West Berlin. He was jailed for 13 years by a Moscow court in 1978 on spying charges, provoking a worldwide storm of protest. Image by Getty Images

Among the charges commonly laid by the State-owned press were ones accusing Jewish activists of inventing the problem of anti-Semitism in the USSR in order to damage the country’s image.

The Soviets genuinely seemed to believe what they preached. They really thought that a vast Zionist conspiracy operated against them. Otherwise how to explain their ongoing defeats in the Middle East? How to explain the fact that the rights of Soviet Jewry were so important for Americans that Congress signed an amendment tying receiving economic benefits in trade relations with the United States to the rights of Soviet Jewry to emigrate?

Soviet Jews were just fine, thank you very much. There was no problem of anti-Semitism: just the problem of Zionists undermining the country at every turn.

We, the Jews who lived with all of it, of course, knew the truth of the matter. We were targets of anti-Semitic insults in the streets. Our educational and professional opportunities were diminished. When I was deciding what college I wanted to apply to to study foreign languages, I learned that my top two schools were off limits to me: They prepared students for careers in foreign service, and these were closed to the untrustworthy Jews. 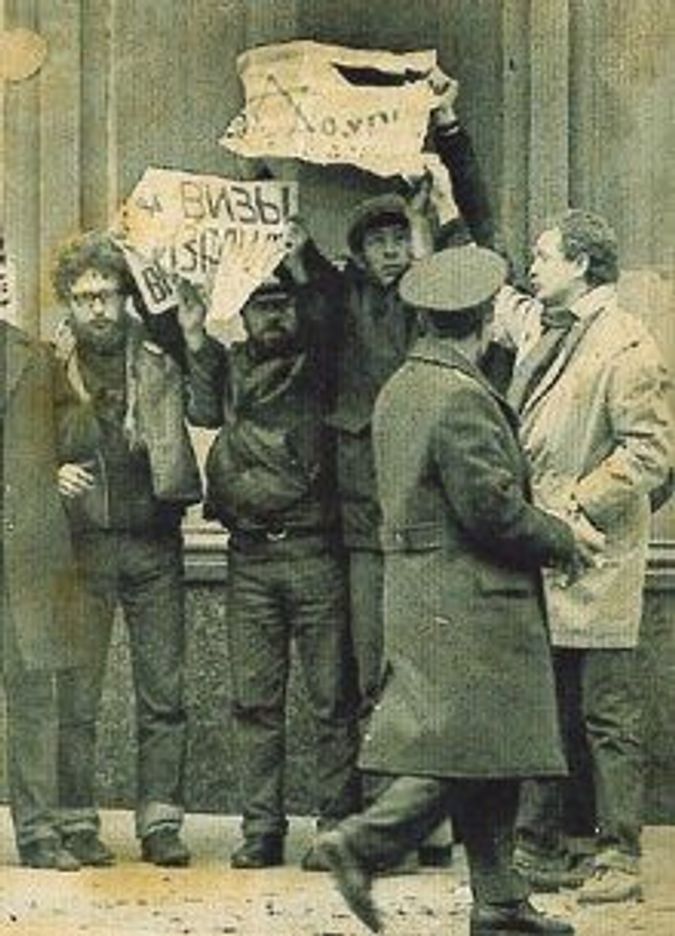 January 10, 1973 - Soviet authorities break up a demonstration of Jewish refuseniks in front of the Ministry of Internal Affairs for the right to emigrate to Israel. Image by Wikimedia Commons

The third school, a teachers’ college, was a possibility but it, too, initially rejected me, even though I had scored in the top five at my entrance exams. This episode was the final straw for us. In 1989 we emigrated. Over the next few years, over a million Soviet Jews left for Israel, and hundreds of thousands to the United States.

The campaign ended with the end of the USSR. Despite its claims, it had nothing to do with justice for Palestinians. It had everything to do with Cold War politics, U.S.-Russian relations, and Soviet interests in the Middle East.

Having lived through that, I find today’s far-left discourse perplexing and increasingly worrying.

Claiming that anti-Zionism and anti-Semitism are not the same may make for an interesting intellectual exercise, but it goes against the historical experience of millions of Soviet Jews and Jews from the socialist bloc. History shows that in practice, the two always dance together.

The mixed heritage of these ideas alone should give us pause.

They were formulated and disseminated by master propagandists operating within a left-wing ideological framework, but they drew heavily on far-right, racist ideas.

In fact, during the Perestroika years, as the party loosened its hold on society, some of the most prolific authors of Soviet anti-Zionist campaigns joined the emerging fascist and openly anti-Semitic organizations that advocated pogroms.

These are lessons in this history that we cannot afford to miss.

Izabella Tabarovsky is a scholar with the Wilson Center’s Kennan Institute in Washington, DC.