The Self-Fulfilling Prophecy Of ‘The Left Hates Israel’ Slogan 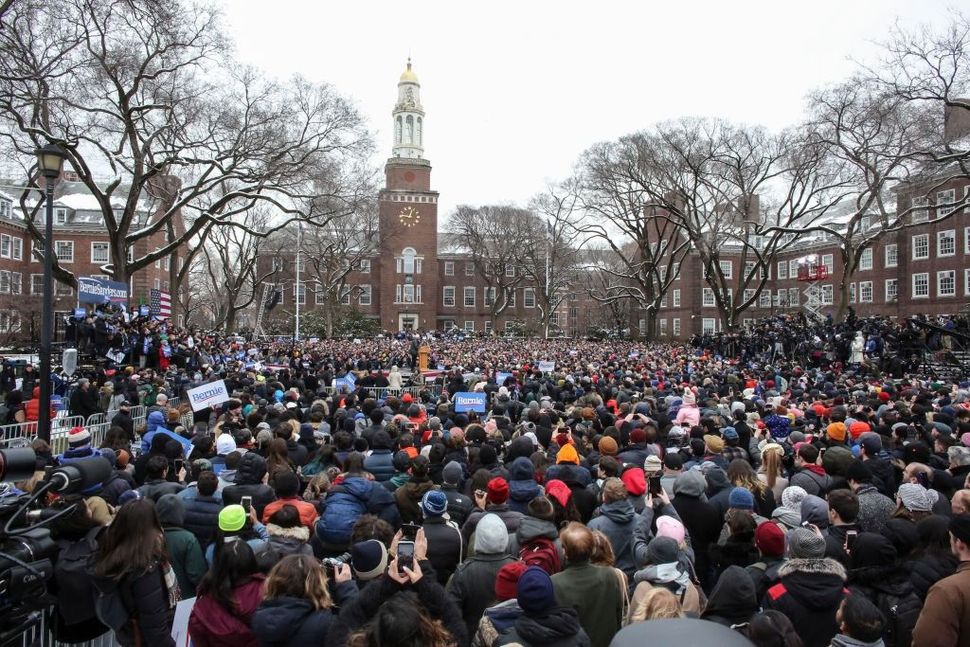 The idea that the Left hates Israel is a commonplace one in the oped pages of major publications as well as at Shabbat tables and in synagogue pews nationwide.

It’s certainly easy to think of many examples to defend this claim: the leadership of the Women’s March, Ilhan Omar’srecent tweets, and even the fact that many progressive groups on university campuses actively support BDS as well as other efforts to thwart the Jewish state.

But the argument is overall a massive strawman at best, if not a downright political tactic.

The leadership of the Democratic party is overwhelmingly pro-Israel. Democrats have almost always voted to fund Israel, help with Israeli aid, and work with Israeli intel to bolster the security of both countries.

In 2014, Congress passed the “United States-Israel Strategic Partnership Act,” a bill that gives Israel the sole delineation of being a “major strategic partner” of the US. The bill, passed and signed under President Obama, strengthens the bond between Israel and America’s military, energy sourcing, intelligence, and businesses along with an increase in the funding given to Israel.

The bill passed 410-1. The one dissenter? Republican Congressman Thomas Massie.

Where was the flurry of articles and conversations prognosticating the rise of anti-Israelism on the right? Where were the calls to run him out of office?

The reality is that for every voice and gesture of anti-Israelism on the Left we can find one on the Right.

Sure, there are some anti-Israel voices coming from the Left; it would be foolish to think otherwise. But radical oversimplifications and hyperbole are completely unnecessary.

And yet, saying that the Left hates Israel is more than just an erroneous claim. It also runs the very real risk of becoming a self-fulling prophecy.

The somber but genuine truth about politics is that group psychology is much more important to the formation of various opinions than actual fact and research. A widely referenced 2015 report produced by the prolific political scientist Alan Abramowitz highlights this exact phenomenon.

Abramovitz starts by recognizing two seemingly contradictory points about our current political sphere. On the one hand, Americans today are less likely to explicitly identify with a specific political party than at any other time in our history. But at the same time, partisan behavior is rapidly increasing within our electorate system.

Rather than an expression of tribalism, this duality represents what Abramovitz calls “negative partisanship.” While Americans are less likely than ever to identify as a member of one party or another, a growing number of Americans are likely to define themselves in explicit opposition to one of the two major parties.

For instance, a person who may not be willing to identify with the Republican Party may still think that Democrats are worse, and she will therefore tailor her voting behavior and political viewpoints to fit the opposite of whatever Democrats think.

This is also true, of course, for the reverse. Just think back to the 2016 election when most people (whether you agree with this assessment or not) felt that they were choosing between “the lesser of two evils”, as opposed to a candidate that they truly supported.

Now think about Israel. A growing number of Republican politicians and supports are trying to use Israel as a political football, attempting to convince voters that they are the true Israel supporters.

This is incorrect both historically and presently. But the truth may not matter.

This would be an absolute disaster for anyone who remotely cares about the future of American support for Israel.

The day that Trump moved the embassy to Jerusalem, I was fundamentally torn. On the one hand, I was elated; finally, an American president willing to recognize the reality on the ground! No other country needs to fight for the legitimacy of their capital city, and Israel should be no different.

On the other hand, I couldn’t help but worry about all the anti-Trumpers who know little to nothing about Israel, who were also watching this happen.

If I hated Trump and knew nothing about Israel aside from the fact that Trump had just done something for Israel that no American president had done before, my knee-jerk reaction would be to dislike Israel, via negative partisanship.

Now let’s add that to the fact that Israeli Prime Minister Benjamin Netanyahu consistently bashed President Obama and the Democrats at the end of the latter’s presidency and, for the past few years, has been soaking up all things Trump.

The more that Republicans tout the idea that the Democrats and the Left hates Israel, the more it becomes true. It’s that simple. It doesn’t just become more true for the Left but for anyone who doesn’t actively identify with the Republican party.

This is the reason why almost every right-wing news source in the country has recently run some variation of an article telling the pro-Israel community to leave the anti-Israel Left. They don’t care about Israel; they care about right wing politics. They know that if they keep saying that the Left hates Israel, it will eventually come true and pro-Israel Democrats will be forced to choose between Israel and other values they hold dear.

If supporting Israel is really your main goal, then stop with the nonsense that half our country hates it. They don’t. But if you keep telling them that only the other half of the country supports Israel, they may take your word for it.

Moshe Daniel Levine is the Senior Jewish Educator at OC Hillel and a Jewish blogger.

The Self-Fulfilling Prophecy Of ‘The Left Hates Israel’ Slogan