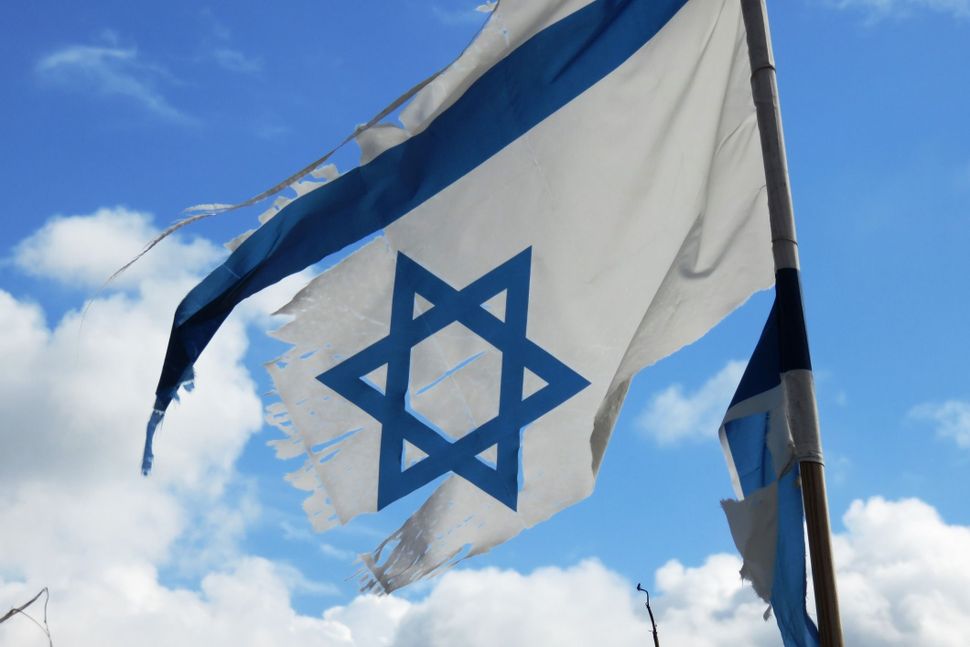 It’s become quite the thing to deny one is an anti-Semite by insisting one is merely an anti-Zionist. Not only do people facing criticism for abetting anti-Semitism use this pabulum, but their Jewish defenders on the left do, too.

In these pages, opinion editor Batya Ungar-Sargon recently asserted that one of the “most important questions facing Jews on the Left today is whether there is a difference between anti-Semitism and anti-Zionism.”

The truth is, there is no difference between the two. For anti-Semitism did not stop evolving with the Nazis. Jew-haters everywhere consider Israel to be the Jew of nations, representing all that is evil and must therefore be shunned and eradicated.

The far right gets this — in fact, it’s why they find common cause with the left. White supremacists have embraced Jeremy Corbyn as leader of the British Labour party; according to David Duke, former grand wizard of the Ku Klux Klan, Corbyn’s election as party leader was “a sign that people were recognising ‘Zionist power’ and ‘Jewish establishment power’.”

Corbyn is not the only left-wing “anti-Zionist” who has gotten praise from Duke; he also found common ground with outspoken Muslim-American activist Linda Sarsour. Duke very much approved of a 2014 tweet where she wrote that “Israel should give free citizenship to US politicians” because “they are more loyal to Israel than they are to the American people.”

What’s that saying about a broken clock? https://t.co/63JAdcE1Ub

But Duke was wrong that Sarsour’s broken clock was only right once; as I have documented, Sarsour posted many similar statements over the years. And it is hardly a coincidence that the former KKK grand wizard wholeheartedly agrees with anti-Zionists that the world’s one Jewish state should be boycotted.

What was in Hilary’s goodie bag at AIPAC. Had to be real nice after that speech that almost bought her a prime minister seat in Israel.

What Duke and other white supremacists realize — and what left-wing defenders of Corbyn and Sarsour don’t want to admit — is that with the establishment of Israel, Jew-haters were only too happy to find a new target that confirmed their bigotry.

Neither Corbyn nor Sarsour will hesitate to loudly condemn easily recognizable manifestations of the “oldest hatred” that come from the right and clearly echo Nazi anti-Semitism. However, neither Corbyn nor Sarsour will acknowledge that anti-Semitism has also morphed, evident in the way Israel is treated with the same hatred and bigotry that Jews once were.

It’s not surprising that anti-Semitism had to morph with the establishment of the Jewish state. After being defenseless victims of persecution for almost two millennia, the Jews returned to their ancient homeland, and just three years after the last Jew was murdered in Auschwitz, there was a Jewish army able to withstand the onslaught of the military forces from all the Arab countries surrounding the fledgling Jewish state.

Suddenly the Jews, about whose inordinate power bigots had fantasized for 2,000 years, had some real power to defend themselves. Perhaps inevitably, the oldest hatred took a new form. As Alan Johnson once put it so well, “that which the demonological Jew once was, demonological Israel now is: uniquely malevolent, full of blood lust, all-controlling, the hidden hand, tricksy, always acting in bad faith, the obstacle to a better, purer, more spiritual world.”

While the Nazis completely discredited their slogan “The Jews are our misfortune,” the left’s slogan may as well be “The Jewish state is our misfortune.”

The obvious echoes of age-old Jew-hatred in today’s demonization of Israel as a Nazi-like state that is too evil to be allowed to exist should answer the question whether there is a difference between anti-Semitism and anti-Zionism, irrespective of the motives of those promulgating this bigotry.

The left for some reason sees a crucial difference between David Duke’s “anti-Zionism” — part and parcel of his white supremacist ideology — and left-wing anti-Zionists like Corbyn and Sarsour who claim to be motivated by concern for the Palestinians, who insist that their demands for “equal rights” and “justice” cannot be satisfactorily met as long as Israel exists as a Jewish state.

But these supposedly pro-Palestinian anti-Zionists are usually unable to explain why “equal rights” and “justice” for the Palestinians cannot be achieved in a Palestinian state alongside Israel.

They also seem unable to recognize the patently obvious hypocrisy of demanding “equal rights” and “justice” while denying the Middle East’s most ancient nation its right to self-determination in the thriving state that the Jews re-established in part of their ancestral homeland.

The ostensibly noble goal of pro-Palestinian anti-Zionism is a single democratic liberal state between the Jordan River and the Mediterranean, which means in practice that the world’s only Jewish state would be replaced by yet another Arab-Muslim majority state. The fact that there are already plenty of such states, but that none is the democratic liberal paradise that is supposed to replace Israel, seems to matter as little as the fact that the last time Palestinians had elections back in 2006, the Islamist terror group Hamas won a clear victory.

What kind of treatment Jews can expect in an Arab-Muslim majority state is evident on the Temple Mount, which is nominally under Israel’s control, but is actually administered by a Muslim Waqf funded by the Jordanian government. The Temple Mount is Judaism’s holiest site, and Israel’s Supreme Court has upheld the right of Jews to pray there; yet Jews can’t exercise this right because the Waqf insists that non-Muslim prayer would defile the site, which they consider in its entirety as the “Al-Aqsa mosque compound.” As Palestinian president Mahmoud Abbas put it in a speech where he vowed to hold on to Al Aqsa and other major religious sites in Jerusalem, Jews “have no right to defile them with their filthy feet.”

Even Jews who are just peacefully visiting the Temple Mount in accordance with the discriminatory restrictions imposed by the Waqf are frequently denounced as “storming” the Al-Aqsa mosque in the Arab media.

Progressives usually present Jews who want to visit, let alone pray, at the Temple Mount as a bunch of crazed right-wing fanatics; at the same time, it is accepted as only natural that “a billion Muslims worldwide would go ballistic” if Jews could freely visit and pray at the holiest site of their faith.

While I abhor the overall political agenda of far-right Temple Mount activists, I think the clearly discriminatory treatment that Jewish visitors to the site have to endure provides at least a hint of the callous disregard of pro-Palestinian anti-Zionism for “equal rights” and “justice” for Jews.

One cannot even imagine how the world would react if Israel insisted Muslim prayer on the Temple Mount was an intolerable desecration of Judaism’s holiest site; but when Muslims insist that it would be an outrageous offense to their religious sensibilities if non-Muslims were to pray anywhere on the vast platform of about 36 acres, everyone is eager to support this despicable bigotry.

So it may well be “pro-Palestinian” to demand that the Jews give up their hard-won sovereignty and agree to live once again as a vulnerable minority under Arab-Muslim rule, but it is most definitely anti-Semitic to ignore the fact that Jews in the Muslim Middle East endured centuries of discrimination and persecution, and that anti-Jewish bigotry remains prevalent throughout the Muslim world.

Palestinian officials and preachers regularly promote Jew-hatred; widespread Palestinian support for terrorism has been documented for some two decades, and some polls also show a shocking degree of Islamist extremism in Palestinian society, including high support for suicide bombings. Between 2007 and 2013, about two thirds of Palestinians believed it could be justified to perpetrate suicide bombings targeting civilians “in order to defend Islam from its enemies;” in 2014 (the last year for which figures are available), support declined, but only to a still alarmingly high 46%. 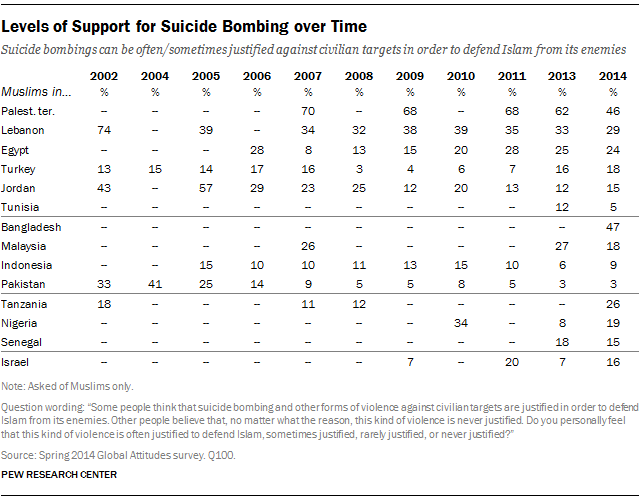 A left that is unable or unwilling to see that the demand to undo the re-establishment of the Jewish state is rooted in ancient religious resentments and an ugly blood-and-soil nationalism that glorifies murderous terrorists as noble martyrs is Jeremy Corbyn’s and Linda Sarsour’s left — not mine.

The highly selective anti-racism of this left was illustrated all too well when Jeremy Corbyn took to Twitter last November to denounce Donald Trump’s “far-right retweets” as “abhorrent, dangerous and a threat to our society.” Corbyn’s own record on anti-Semitism was already well-known at the time, but this record didn’t bother Sarsour, who playfully responded to Corbyn’s tweet: “Come be our president pleasssssseeeeeee…”

I have yet to come across a single supposedly pro-Palestinian anti-Zionist willing to denounce not just the long history and legacy of anti-Semitism in the Christian west, but also the ancient and enduring anti-Jewish bigotry in the Muslim Middle East.

This is the modern day version of anti-Semitism, and no reframing this as “just criticizing Israel” can hide its true nature.