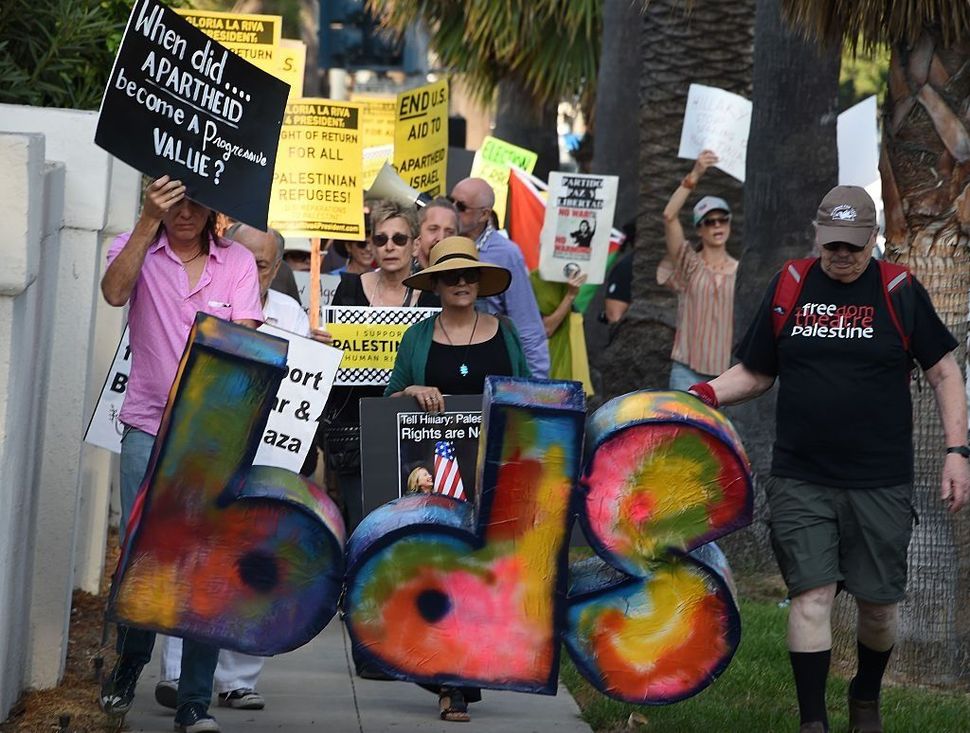 In a recent article in these pages, Josh Nathan-Kazis exposed the growing efforts of right wing actors targeting American pro-Palestinian student activists, particularly those urging their universities to divest from Israeli and Israel-supporting businesses.

Students who show support for the boycott, divestment and sanctions movement may wake up the next day to find their name on a blacklist website like Canary Mission. Student senators who agree to vote for university divestments may receive threats or blackmail from anonymous sources, who have an unsettling amount of information on these students. Even those who express pro-Palestinian sentiments, regardless of their opinions on Israel, have been targeted by this shadowy cause.

Organizations like the Israel on Campus Coalition (ICC) have spent millions of dollars in recent years on bringing high-power Republican political consultants onto campus campaigns to counter BDS efforts, with varying degrees of success. Though ICC efforts seem to have successfully squelched a divestment resolution at Ohio State, their efforts have alienated many Jewish students — who may be questioning Israeli hostility toward Palestinians — from Hillel and other Israel-friendly Jewish groups on college campuses.

College students and political activism have always gone hand-in-hand. It makes sense: You put several hundred young minds in a small geographical area, give them few responsibilities and access to all the knowledge they could want, and sooner or later, they’re going to start dedicating their time and brain space to what they see as the most important issues of the day.

I count myself as an example of this phenomenon. Studying 19th-century Jewish socialist revolutions during my freshman year at Brandeis, I felt inspired to schlep out to the freezing Boston streets to protest for hours in the early months of the Trump presidency. I plan to keep doing this. College students were at the forefront of many social movements in the past century, and there is an immediate dopamine rush in getting swept up in the romance of activism.

Once the youth have got a revolution rolling, it’s difficult to calm the tides. And as Israel’s current government continues to polarize its citizens and global audience, passing fundamentalist laws and aligning itself with the Trump administration, the conversation — and action — around BDS on college campuses is only going to grow louder.

When I try to think of how my activist friends would react to blackmail or threats, I can’t imagine many of them would back down. Adolescence is an age of fearlessness and in the minds of college kids, these efforts only incriminate the pro-Israel right even more — as it has on campuses like that of George Washington University.

When student senators found their names listed on a website created for publicly shaming those in support of university divestments from Israel, it did not stop them from passing that very resolution. And it has only motivated G.W. students to oppose pro-Israel groups. The reason for this is simple: College students don’t like being told what to do.

If you are a Republican political consultant trying to convince liberal college students not to support BDS, you are only going to look like Inspector Javert spying on Marius and his friends at the barricade in “Les Misérables.” Covert tactics and untraceable blackmail will not make the mobilized pro-Palestinian left go away.

But I’m not saying there is no hope for changing its course. If I returned to Brandeis this fall to find that BDS efforts had seriously ramped up, I would do what I could to oppose them. I have Israeli family, I spent a gap year in Jerusalem, and I have friends in the IDF. I consider Israel my cultural homeland, and I think divestments from Israel will hurt Israelis and Palestinians alike.

But I would never report J Street members to the ICC in hopes of slowing pro-Palestine efforts. This helps no one; it only sows seeds of resentment and fear in an already cracking relationship between activist groups, who I believe will ultimately reach their goals of peace and justice by banding together.

Instead, I would do whatever I could to hold open dialogues between voices on campus for Israel and Palestine. I would make sure my peers are properly informed on this complicated, emotionally charged conflict.

As I write this, a few blocks away from where George Washington University students were publicly threatened by costumed Canary Mission members just a few months ago, I worry that I myself may be targeted by them for working against their pro-Israel efforts.

My words to them echo the words of an earlier student activist, the Chicago Seven’s Abbie Hoffman: “You are a shanda fur di goyim.”

This is not the Jewish unity we want to see today. Your efforts are hurting, rather than helping, the voice for Israel on college campus.

Thanks, but no thanks.